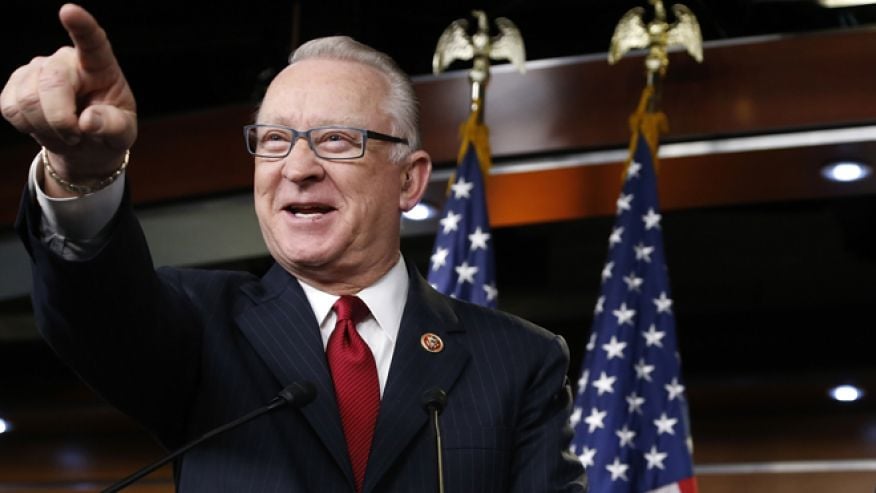 While generally supporting President Barack Obama’s announced strategy to defeat the Islamic State of Iraq and Syria (ISIS or ISIL), the chairman of the House Armed Services Committee said he wants, “our coalition to go all-in now, so that we do not risk having to use enormously more blood and treasure later. . . . Fortune favors the bold.”

Speaking on the 13th anniversary of the terrorist attacks on the United States, Rep. Howard “Buck” McKeon (R-Calif.) added, “I would much rather fight ISIL in Iraq and Syria today than fight them in Iraq, Syria, Jordan, Lebanon and Kurdistan tomorrow.”

McKeon said the more dangerous course is waiting, and the United States has to realize that the jihadists pose a serious and imminent threat to the United States now. He told an audience at the American Enterprise Institute, a Washington think-tank, that in Iraq “Americans will be shot at, and they will be shooting back. There’s simply no other way to do this. This strategy isn’t without risk. Neither is the president’s. It would be wrong to sell it that way to the American people.”

While saying the “American people have really switched from ‘don’t do anything’ to ‘go after them'” to defeat the Islamic State, McKeon, who is staking out a position that is more aggressive than those of many of his Republican colleagues, said in answer to a question, “We are trying to see what the mood of the Congress is,” even in taking up a Saudi Arabian offer to provide training space. “It’s a day-today thing right now” as to whether Congress will act on it. He noted that there were no other bills before the House covering the crisis in the Middle East.

Among the steps the president announced in a prime-time address Wednesday were sending 475 more military advisers to Iraq, assisting moderate Syrians who oppose the regime of Bashar al Assad and conducting air strikes in Syria. Great Britain and Germany have expressed reservations about their nations’ participation in air strikes in Syria. Obama said he already had the necessary authority to take these steps without further congressional approval. The latest moves would mean that about 1,700 Americans would be assigned to support the Iraqi government and Kurdish forces and provide security for U.S. citizens in Iraq, including its Kurdish region.

In response to another questioner, he said “ISIL is the best led” of the extremist groups s threatening the United States and operating in an area vital to the nation’s and its allies’ interests. Starting with the seizure of bank assets in Mosul, it also is well-financed—from illegal oil sales he estimated at $85 million per month and ransoms. It is also gaining the support of about 500 foreign fighters per month. Defense estimates have put the size of its total force at between 10,000 and 20,000. “Their goal is to take us back to the area they call the Levant . . . eliminate all the borders (as already done in Syria and Iraq) . . . and form this huge caliphate to breed and foster and send [their ideology] around the world. Daily, they are still adding territory,” he said.

Counterterrorism “has not stopped the growth of ISIL and the spread of terrorist groups in the region. . . . Defeating ISIL is the only option on the table,” McKeon said.

Key to success is to have Sunni moderates reject ISIL, which has its roots in the al Qaeda insurgency in Iraq after the U.S. invasion in 2003. “ISIL is a Sunni movement. . . . The Sunnis must have reason to believe that we have their back if they stick their necks out with ISIL. They must believe they have a future politically in Iraq.”

He added his plan expects more American “boots will be standing in the sand” than special forces trainers sent to strengthen the Iraqi army and the Peshmerga, the defense force of the Kurdistan region of Iraq. He said his plan did not envision a corps-size or division-size commitment, but it would be a long-term, sustained presence.

McKeon said the goal was to increase the ability of Iraqis and Syrian moderates “to raise to the capabilities” they need to succeed. He added that meant the United States using its intelligence skills, logistics strengths, and planning abilities to assist them and allies and partners in the area for this fight. “We want to help them win their fight. . . . [The United States] is not going in to take over.”

McKeon said this can’t be another counterterrorist operation. “If we want ISIL defeated, we need them encircled. Any strategy that allows ISIL to squirt out into Jordan, Lebanon, or Turkey will only make the fight more difficult.”

“A coalition on the ground and in the air, backed by the enabling capabilities of the United States will be required.” Citing Gen. Dwight D. Eisenhower’s insistence on planning for victory from D-Day forward, McKeon said, “This is no light lift.”