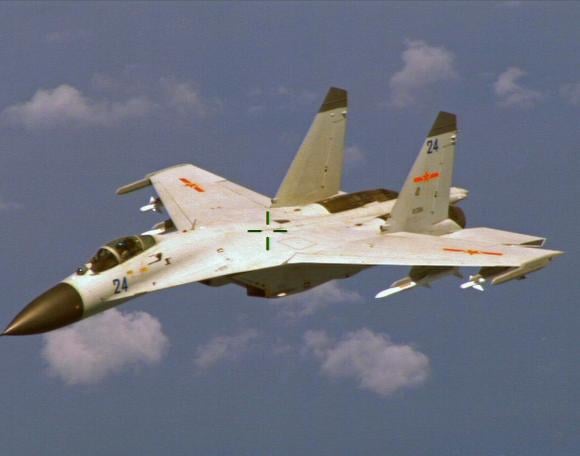 China called on the U.S. military to stop its “wide in range, highly frequent and close in distance,” surveillance missions on the edge of the Chinese mainland, People’s Liberation Army officials said in a Thursday Beijing press conferences.
“These behaviors of U.S. military ships and aircraft could easily cause misperception and miscalculation or even air and sea accidents,” Yang Yujun, spokesman for the Chinese Ministry of Defense (MOD), said in response to questions.
“Therefore, we do urge the U.S. side to decrease these close-in reconnaissance activities against China towards a complete stop.”

Yang said the U.S. ships and aircraft “often [show] up without being invited or even broke in our exercise or training zones which have been announced in advance.”

The most recent comments follow an incident in which a Chinese Shenyang J-11BH fighter buzzed a P-8A Poseidon off the coast of Hainan Island in the South China Sea on Aug. 19.

The fighter, “made several passes, three different occasions, crossed under the aircraft with one pass having only 50-100 feet separation,” Rear Adm. John Kirby said on Aug. 22.
“The Chinese jet also passed the nose of the P-8 at 90 degrees with its belly toward the P-8 Poseidon, we believe to make a point of showing its weapons load-out.”

Kirby went on to say that the Chinese conduct was, “unprofessional.”

Yang denied Chinese pilot’s actions were out of line and tweaked the U.S. for placing their pilots at risk for flying missions that skirt the edge of Chinese territorial waters.

“I also noticed that the US side described the operation of our pilots as ‘reckless and dangerous.’” Yang said.
“Our pilot’s operation has been professional and due regard has been given to the safety issue. China is a developing country. Our aircraft are very precious and the lives of our pilots are even more precious. Compared with the countries, which asked their pilots to fly around other country’s doorsteps, we cherish more the safety of our personnel and equipment.”

Hainan Island is home to a People’s Liberation Army Navy submarine base and U.S. ships often monitor activity in the area and have led to conflicts.

More than a decade ago, a People’s Liberation Army Navy Shenyang J-8 Finback flown by Lt. Cmdr. Wang Wei accidentally rammed a Navy EP-3 Aries electronic surveillance aircraft. The EP-3 was forced to land on Hainan Island, while Wang Wei was killed in the incident.