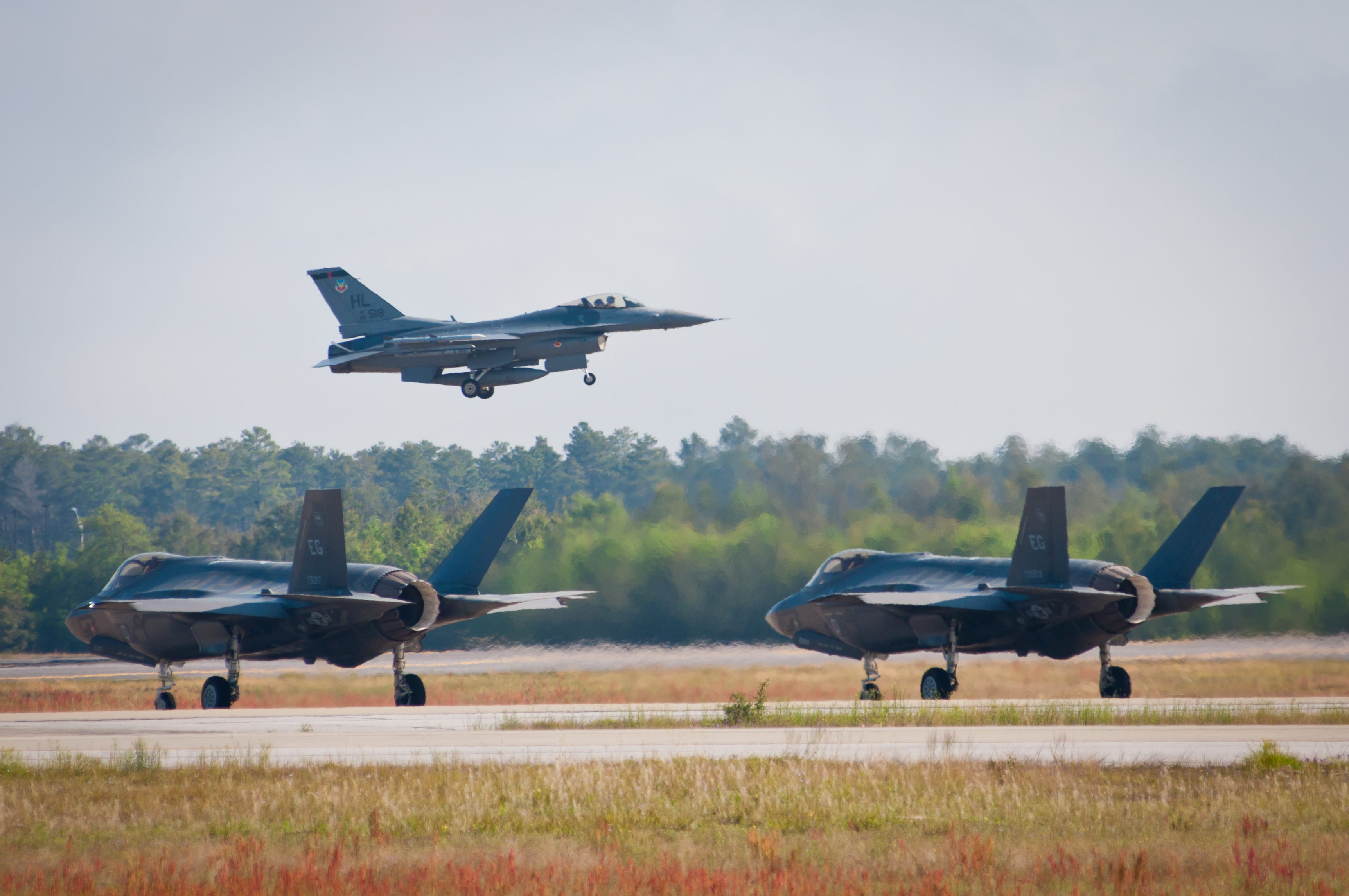 An F-16 Fighting Falcon takes off while two F-35 Lightning IIs taxi on the flightline in a training mission April 24, 2014, at Eglin Air Force Base, Fla. US Air Force Photo

The Pentagon has formally grounded the entire Lockheed Martin F-35 Joint Strike Fighter fleet after a June 23 fire that severely damaged one aircraft on take-off.

The fleet-wide grounding suggests that the cause of the fire is much more serious than the F-35 Joint Program Office initially suspected. In the immediate aftermath of the incident, the fire was thought to be a one-off event.

“The technical air worthiness authorities of the Department of the Air Force and Department of the Navy have issued a directive to ground the F-35 fleet based on initial findings from the runway fire incident that occurred at Eglin Air Force Base on Monday, June 23,” said Pentagon Press Secretary Rear Adm. John Kirby in a statement on July 3.
“The root cause of the incident remains under investigation.”

According to Kirby, the Pentagon has ordered additional inspections of the Pratt & Whitney F135 engine that powers the single-engine stealth fighter. Sources had suggested to USNI News that the fire—which occurred in the rear of aircraft—involved the engine and the integrated power package.

However, the latest information from the Pentagon suggests the problem stems from the engine — and could be the result either a manufacturing or design defect

“Return to flight will be determined based on inspection results and analysis of engineering data,” Kirby said. “Defense Department leadership supports this prudent approach.”

Pratt & Whitney officials said they were cooperating with the investigation.

“We are working closely with the Air Force Safety Investigation Board to determine root cause and to inspect all engines in the fleet,” said company spokesman Matthew Bates in an emailed statement to USNI News.
“Safety is our top priority. Since the incident is the subject of an investigation it is inappropriate to comment further.”

“Lockheed Martin is working closely with the F-35 Joint Program Office and industry partners in supporting the AF investigation,” the company said in a statement provided to USNI News on Friday.
“Safety is our team’s top priority.”

Kirby insisted that US Marine Corps is still preparing to show off the short take-off vertical landing F-35B at the Royal International Air Tattoo and Farnborough International Air Show in Great Britain later this month despite the setback.

“Preparations continue for F-35 participation in international air shows in the United Kingdom, however a final decision will come early next week,” Kirby said.