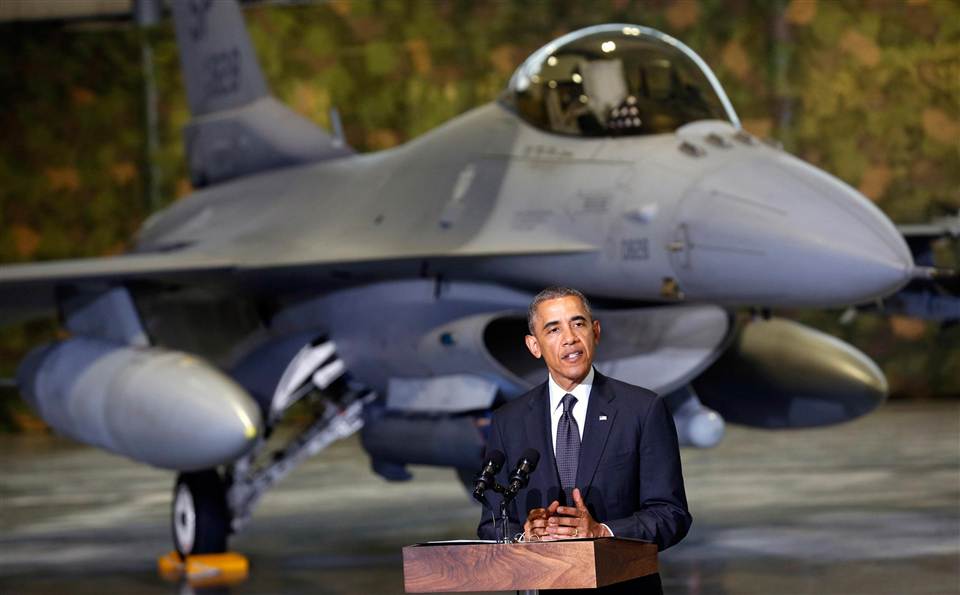 The White House has unveiled an ambitious plan to reinvest over $1 billion in U.S. military personnel and equipment into efforts to bolster regional security with Washington’s allies in Europe.

Announced Tuesday by President Obama during a speech in Warsaw , the administration’s European security plan effective changes course from previous Pentagon efforts to drawdown U.S. military presence in Europe and shift those forces to other hot spots around the world.

During the speech, which kicked off a four-day diplomatic tour across Europe, Obama said the $1 billion security proposal is the strongest signal from Washington that its alliances with NATO and other regional allies are vital to U.S. national security

The plan would finance increased military-to-military exercises between U.S. forces and their European counterparts, according to Obama. The funds would also pay for the creation of more stockpiles of American weapons and equipment in Europe. These so-called prepositioned stockpiles will ensure U.S. and allied forces can have quick access to American military hardware, should regional tensions boil over into open conflict.

Aside from military equipment and joint exercises, the White House and Pentagon will also accelerate rotational deployments of Army and Air Force units through various Eastern European countries, as part of Washington’s “powerful demonstration of America’s unshakeable commitment to our NATO allies,” Obama said.

But the White House will still need congressional approval for the $1 billion in funding for the plan, before U.S. military planners can begin moving forward with the details of the security program. Administration officials are already preparing their case for lawmakers, to secure legislative backing for the plan.

However, the president also noted that America’s investment in European security demands similar buy-in from NATO allies, if the White House plan is to succeed in quelling threats to the region.

“The initiative I’m proposing today is a reminder that every ally needs to carry their share and truly invest in the capabilities of the alliance that are needed for the future,” Obama said Tuesday.

“Obviously, we all have different capacities. The United States is going to have different capacities than [other NATO allies] . . . But everyone has the capacity to do their fair share,” the president added. “To do a proportional amount to make sure that we have the resources, the planning, the integration, the training in order to be effective.”

Prior to Tuesday’s announcement, Pentagon leaders had been weighing options to drawdown U.S. military presence in Europe, in light of budget pressures in Washington and more pressing national security threats in the Mideast, Africa and the Asia-Pacific region.

But that equation changed abruptly in the wake of Russia’s aggressive annexation of Crimea and portions of eastern Ukraine. Troops from Moscow, backed by Russian separatists in Ukraine are threatening to tear the country apart as ongoing violence in Kiev, Dontesk and elsewhere has left hundreds dead and thousands wounded in the fighting.

Russia’s move into Ukraine has stoked fears among U.S. and NATO allies in the region, such as Poland, Moldova and other Baltic states, that Russian forces may begin to move across their borders.

So far the Obama administration has opted for a diplomatic strategy, backed by political and economic sanctions, to stem Russia’s advances into Ukraine and elsewhere in Eastern Europe.

Tuesday’s plan could be seen as a sign the Obama White House is moving more toward military options to resolve the crisis in Ukraine. Most recently, U.S. diplomats and military officials met with members of Ukraine’s interim government, to get an assessment of the detioriating security situation on the ground.

For his part, Obama said the security plan released Tuesday is not mere rhetoric, but a tangible effort by Washington to increase its military footprint in Europe, spurred on my events in Ukraine.

“Our contingency plans are not just pieces of paper on a shelf, but we have the capacity to operationalize it. That means that there has to be resources pre-positioned; there has to be training; there have to be joint exercises,” Obama said. “[And] there’s no doubt that what has happened in Ukraine adds a sense of urgency” to getting the plan into action.