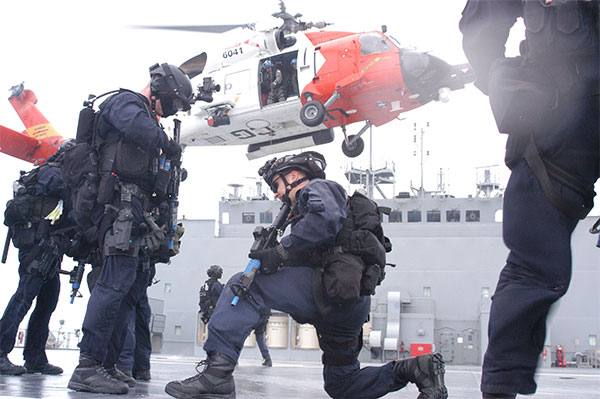 One way to counter the drawdown in defense spending at home and with allies and partners is to look at programs such as the Joint Strike Fighter as ways to close the seams in meeting future security challenges, the vice chief of naval operations for plans, policies and operations said on Monday.

Chairing a panel on operating forward at the Navy League’s Sea-Air-Space 2014 exhibition at National Harbor, Md. Vice Adm. Michelle Howard said, “If you’re in an alliance then you get the commonality of parts” and also more importantly the ability to swap pilots because the aircraft is the interoperable. “I think we’ve seen this coming for a while,” and it will help the Navy and Marine Corps operate forward with allies.

Vice Adm. Robert Miller, commander of the naval forces in U.S. Central Command, said that partnerships have proven vital in providing forward presence and for operations in that area. He cited building necessary infrastructure in Bahrain for Littoral Combat Ships, the future arrival of the high speed theater vessel and a replacement for Ponce as an afloat forward staging base.

But there are glitches in operating in partnerships even with close allies such as France and Great Britain. “We still have significant challenges in exchanging information,” he said. This was one of the recent lessons learned from a prolonged exercise with the French Charles de Gaulle carrier battle group, the Royal Navy and the United States.

When the time changed to take questions, the audience shifted gears from the value of forward presence to what the future holds for the sea services in terms of weapons and safety of training as defense spending drops.

Looking to the near future, Vice Adm. Thomas Copeman, commander of naval surface forces, said the work the surface Navy is pursuing in the integration of laser and energy-directed weapons take a large step toward overcoming the limits of magazine capacity. That will ensure that ships can do more than “defend yourself to death,” an important consideration in the rebalance to the Pacific.

Lt. Gen. Ronald Bailey, U.S. Marine Corps deputy commandant for plans, policies and operations, said, “The challenge is the size of the [laser and directed energy] equipment we’re using.” Adding, “We have used it on ship to shore, have used it on land” and is preparing to test on the walls of an embassy.

“We’re very interested [in these weapons’] less than lethal capabilities] to take control of a situation,” instead of using a .50 caliber machine gun, Parker said.

On the impact of budget cuts impacting safety in training and operations, Bailey said, “There are no shortcuts in training.” Adding, “What we have mastered across the services in lessons learned [is] to take it down to level of the Marine” and hold leaders accountable in stressing safety.

“The hardest thing is getting [Coast Guardsmen] out of the can-do” mentality when they are not ready to do, Parker said.
“We take risk on ourselves [to conduct operations] after all that is our job.”