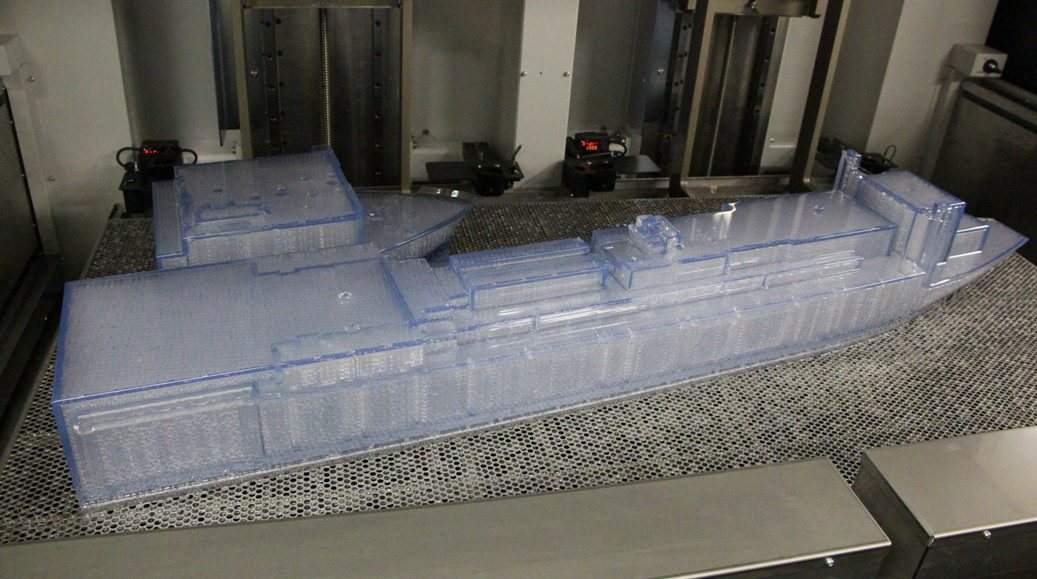 A ship model created using additive manufacturing, a process both the Coast Guard and Navy are investigating. US Navy Photo

The Navy and Coast Guard are getting closer to incorporating additive manufacturing — commonly known as 3D printing — into their respective services, Navy and U.S. Coast Guard officials said during a panel discussion at the Navy League’s 2014 Sea Air Space exhibition at National Harbor, Md. on Tuesday.

“But processes [of certification and qualification] will still apply to certify it’s safe for to the user,” he added.

“It’s a game changer,” Rear Adm. Mark Butt, Coast Guard assistant commandant for capability, agreed at the Tuesday session, and the sea services need to accelerate its movement to the fleet by assigning enough resources to it. “There is a tension between standardization and innovation” that has always existed but it has intensified because these technologies accelerate the rate of possible change.

He added there are additional concerns about cyber security in moving design data about and having it corrupted by state or non-state actors. “We could get design defects put into the parts.” He asked but did not answer, “What constitutes quality assurance in 2030?” or even now as the technology evolves into a democratization of manufacturing.

There are also questions of who controls data rights to those products and who is the end user of what’s produced, areas that would have to be answered in future contracts, Verrasco added.

For now, the Navy has been pushing forward through 25 different organizations working on 50 or more projects, Verrastro said. He also said the service is beginning to bring these organizations together to share information and ensure there are not “500 different networks aboard ship” using different additive manufacturing processes. Eventually, it will be chartered. The Navy does “not want to re-create the wheel.”
“Most of the work is being done in polymers. Metal is the next big step” in 3-D printing. He added the biggest breakthroughs so far have come in the medical field.

Thomas Campbell, a research an associate professor at Virginia Tech, cited work being done to in printing cartilage implants and research into printing human organs “right on ship” as advancing the uses of 3D printing in the near future. 3D printers now aboard Essex are printing disposable medical supplies.

Better than a picture, “3D printing is a million, a billion words” because a person “can hold it in your hands” in minutes to hours, Cmdr. Tyson Weinert, program manager for innovative programs in the Coast Guard, said. The tangibility of what was an idea from the deck plates can also accelerate decision-making by leaders on its applicability.

“Those on the deck plates have great ideas,” Lt. Ben Kohlman, from the Navy’s Rapid Innovation Cell, said.
“If you can see it, you can manufacture it. If you can think it, you can manufacture it.”
But putting 3-D printers aboard ships creates a new set of challenges. Questions include: Do they work as expected when under way in the pitch, roll and yaw of the sea; where do they fit on an already built ship; what are the safety hazards, especially fire, when using them on metals, for example.

“It’s going to be crawl, walk run” in putting the printers shipboard, Kohlman said.
Butt said as a joke the Coast Guard could use 3-D printers to produce obsolescent parts for its aging cutters.