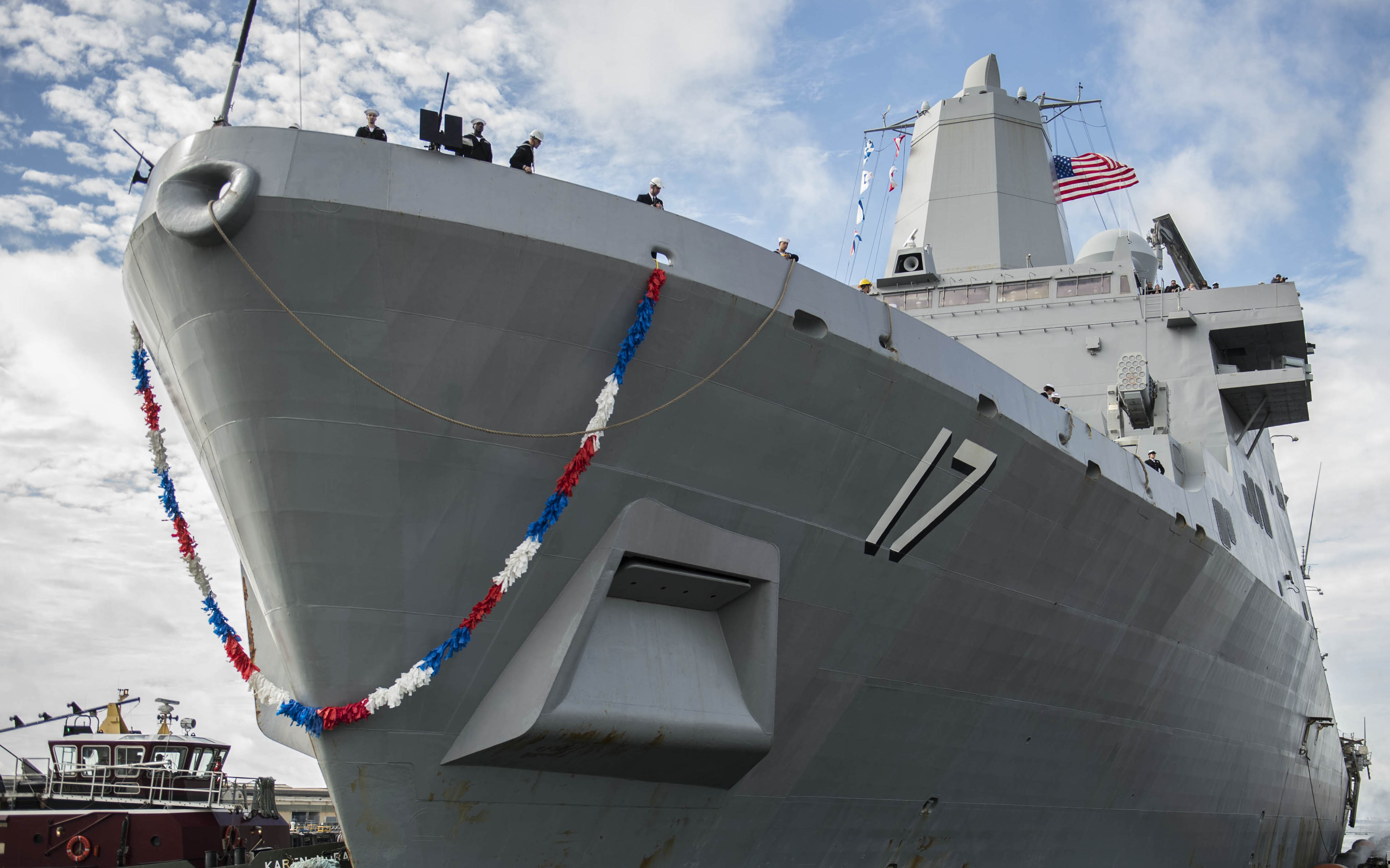 In the 1960s our nation was fixated with President John F. Kennedy’s vision to have a man on the moon before the end of the decade. The country was wholly supportive of his goal. With bipartisan support from Congress, the government approved the funding for NASA that was needed and the nation’s “best and brightest” engineers and scientists flocked to the space industry. Millions of Americans were glued to their television sets in July 1969 and cheered when Apollo 11 landed on the moon, and the words of Astronaut Neil Armstrong will always be remembered as he made that first step on the lunar surface: “That’s one small step for man and one giant leap for mankind.”

Over the next 40 years NASA and the space industry would attain several remarkable achievements ranging from launching the space shuttle to exploration of Mars. Today NASA, after decades of receiving congressional funding, is no longer in the vanguard of appropriations from Congress and relies on the Russians to get U.S. astronauts to the international space station. The crowning achievements of one of the most remarkable programs in our nation’s history are now left to the history books.

Another industry that is facing the same budgetary crunch as NASA is military shipbuilding. Ever since Congress passed the Naval Act of 1794 and appointed Joshua Humphries of Philadelphia to design and build the six original frigates to fight the Barbary Pirates, our Navy has been outfitted with exceptional ships and remarkable technology. In times of peace and war our defense shipbuilding industry has served our maritime nation with pride and distinction. There are many reasons why this nation was so successful in World War II, but one clear advantage over our enemies was the shipbuilding industry. From the thousands of Higgins landing craft designed and built in Louisiana to massive Iowa-class battleships that were constructed in the shipyards of New York and Philadelphia, many of the “best and the brightest” of the “Greatest Generation” worked in our shipyards.

Like the space program in the latter half of the 20th century, the shipbuilding industry attained some noteworthy accomplishments. From the Nimitz-class carrier to the Arleigh Burke-class destroyer with its AEGIS technology, the shipbuilding industry was designing and building some of the most proficient weapon systems ever to sail the seas. That cutting edge technology was the marvel of sailors that crewed those ships and the envy of other maritime powers. Today, with the Department of Defense facing massive budget cuts, the nation may soon face a situation similar to NASA’s, where our defense shipbuilding industry has declined to only a few shipyards, and our ability to design and build the next generation of naval vessels may be weakened beyond a stage of reversibility.

The Congressional Budget Office (CBO) has reported that the Navy’s historical average level of funding would be insufficient to cover the shipbuilding projects contained in the current 2013 30-year shipbuilding plan. The Navy’s goal is to maintain a fleet of around 300 ships, but that plan will require more than $20 billion per year as reported by CBO, vice the $15.2 billion that the Navy’s plan maintains in their Ship Conversion Navy (SCN) account. Additionally, that gap is more than likely to increase as the Navy looks to fund the ballistic-missile submarine (SSBN) replacement program, which is estimated to start in 2021 with a projected cost of more than $4 billion per vessel.

One program that offers Navy cost efficiency as it struggles to build the future fleet is the LSD replacement program—LXR. Currently the Navy has Huntington Ingalls Industries under contract to build the last two of the San Antonio-class LPDs. The last of the class, the USS Portland (LPD-27), will be delivered to the Navy in the summer of 2017. Rather than stop the hot LPD production line, lay off thousands of qualified workers, and reopen the bid process for another ship class, it would be prudent to continue production of a proven ship type under a multiyear procurement (MYP) or block buy contract structure. Those specialized contracts allow the purchase of material and equipment for multiple ships, vice just one at a time. Suppliers are incentivized in this structure to offer lower per-unit prices for material and equipment based on the stability of the larger order. Those types of contracts have shown to return 10 to 15 percent savings in previous ship awards, including Arleigh Burke-class destroyers (DDG-51) and Virginia-class submarines (SSN-774). Huntington Ingalls Industries has succeeded in working with the Navy on the current LPD design, which includes systems configurations that have reduced operating and support costs, as well as operational performance improvements. Additionally, the shipbuilder has teamed with the LPD supply base on system engineering and integration efforts that increase operational performance and reduce life-cycle costs.

The ultimate customers—the U.S. Navy and the U.S. Marine Corps—could not be happier with the significant capability and recent operational successes of the San Antonio-class (LPD-17). Speaking to the Congressional Shipbuilding Caucus breakfast on Capitol Hill, Gen. James Amos, Commandant of the Marine Corps, said, “We have an LPD hull right now that is one of the most successful hulls we have. Years and years of time and effort have gone into that LPD. It is as fine an amphibious warship that has ever sailed the seas. The LPD, from my perspective, just makes sense.” He concluded his remarks by saying that the United States is “going in the wrong direction on total number of ships” and that we cannot afford to because the nation needs more naval ships. With the new “new normal” being split amphibious readiness group (ARG) deployments, this author believes the continued production of the LPD-17 amphibious warship answers all bells for lift, cube and survivability, delivering all of the required capacity and capability that is essential for disaggregated ARG missions that the combatant commanders demand.

In a powerful expression of support, 20 retired Marine Corps generals—including the most recent commandant, General James Conway, and Central Command Combatant Commander General James Mattis—wrote a letter to Congress urging the extension of the San Antonio-class beyond the Navy’s current plan of 11 ships. Additionally, they strongly recommended leveraging the established building plan of the LPD program and continued production to the LX(R). The following lays out central issues vital to the shipbuilding industry: “By using the proven LPD-17 design for a 12th warship we can leverage existing industry workforce and supplier relationship, building a timely cost-effective bridge to LX(R) deliveries while also ensuring the health of our amphibious warship industrial base and labor force.”

Awarding the LX(R) contract under the MYP acquisition strategy allows the Navy to receive significant savings on the program and stabilize the shipbuilding industrial base. Stability in construction orders is the most important variable in shipbuilding efficiency. Efficient production—defined as delivery of ships on cost and on schedule—is the key element to credibility with the Congress and the taxpayer. Stable, efficient construction of these ships will make them more affordable. Additionally, our national security interests would be further protected by building a proven platform that our combatant commanders have requested.

As we look to the future there will continue to be significant demand for a formidable maritime force. The leaders of our nation need to look at every avenue to maintain a robust shipbuilding industry that can build the ships our Navy and Marine Corps need. A nonpartisan, grassroots organization made up of more than 200 members and 148 companies that provide critical material, parts and equipment to build our amphibious warships is now active in support of preserving our national treasure—our shipbuilding industrial base.