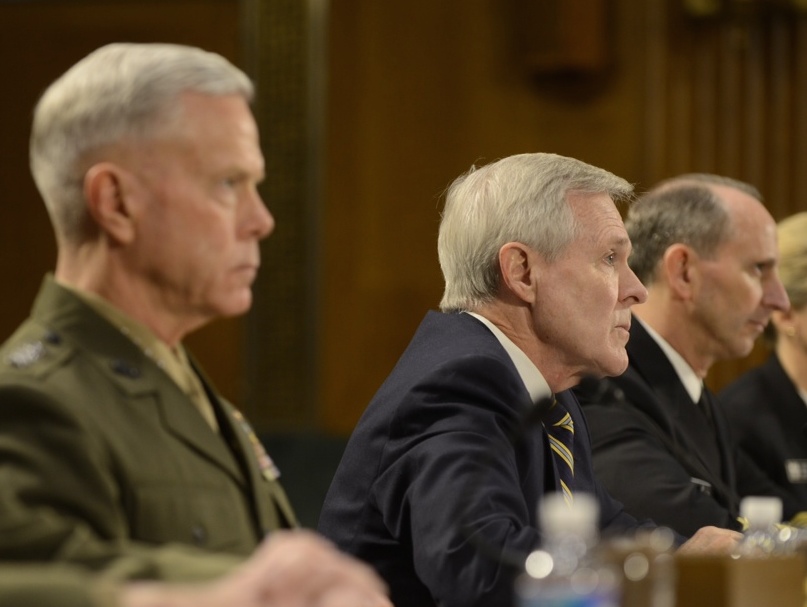 Secretary of the Navy RAy MAbus, Gen. James Amos and Adm. Jonathan Greenert before the Senate on March 12, 2014. US Navy Photo

Amos, Chief of Naval Operations Adm. Jonathan Greenert and Navy Secretary Ray Mabus told the panel of their deep concern that a return to Budget Control Act spending caps in 2016 would be “serious in the extreme” to the sea services and their ability to carry out their part of the national military strategy – from readiness to modernization and shipbuilding to forward presence.

Amos said he shared Greenert’s worry over the “marked paucity of ships and shipbuilding” and added, “we need capital ships,” capable of carry trained and equipped Marines.

Mabus said that if sequestration returned the Navy would have, “fewer ships [built] at higher costs.” Using a chart provided by Greenert, Sen. Susan Collins (R-Maine) said that if that were the case instead of 10 destroyers [DDGs] being built in the five-year plan, there would be seven.

Mabus added that Defense Secretary Chuck Hagel’s decision to cap the buy of Littoral Combat Ships at 32 instead of the original 52 in long-range shipbuilding plans didn’t void the Navy’s need for “a small surface combatant.”

Mabus said his task force, following Hagel’s instructions on factoring in cost and time of delivery, is weighing three options for that ship – using current LCS design, modifying it or developing a totally new design.

In his opening statement, Mabus said, “Quantity has a quality all its own,” noting the Navy has 60 ships under contract now and that will put the size of the fleet at more than 300.

When asked how the Navy was responding to events in the Crimean Peninsula versus its re-balancing to the Pacific, Greenert said that the Navy had 21 ships operating in the European Command area of responsibility. Amos added when the Joint Chiefs agreed to the re-balancing they “never had any intention … to vacate Europe, to vacate Africa.”

To free more money for shipbuilding, modernization and training, Mabus said the services needed “to curb the growth of spending” on personnel from pay to housing to medical care because “it is eating up a larger share of the budget.”

Amos said if those costs aren’t contained the nation, “would have an entitlement-based” Marine Corps.
On opening all specialties to women, Mabus told the subcommittee that when he toured Naval Station Kings Bay, Ga., recently that women were taking their places smoothly on submarines. He said it was a “no news there” good sign of gender integration.

“It is a relentless, continuing challenge,” Greenert said to ensure that all sailors – regardless of gender or sexual orientation — are treated with respect.

Mabus said that he was encouraged that many more sailors were reporting sexual assaults and attributed that increase to their having greater confidence in the system’s responsiveness. As he has in the past, he cited the Navy’s efforts in this area at the Naval Academy and “A” schools and running shore patrols at night.

There “is far more work to be done, [but] we believe we are getting traction.”