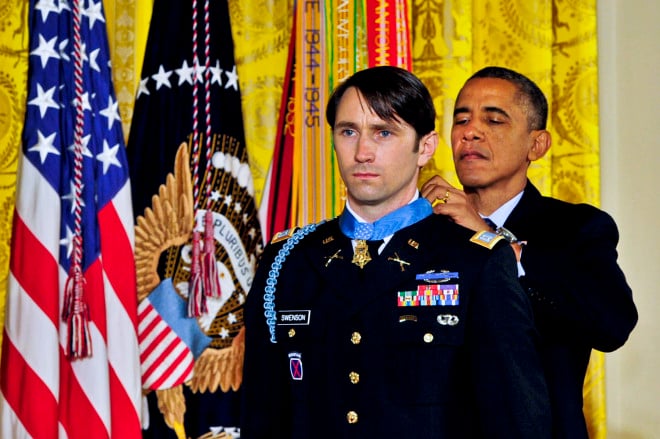 Defense Secretary Chuck Hagel is kicking off a department-wide review of how the U.S. military awards battlefield commendations to American service members.

The goal of the review is to “to take a more holistic view of the awards process and the decoration process” which is expected to wrap up by early 2015, Pentagon Press Secretary Rear Adm. John Kirby said Wednesday.

The all-encompassing effort, which will involve all the services and the Joint Staff, is the department’s effort to deal with recent controversies surrounding the combat commendation process, rather than just “cherry-picking it with this device here or that ribbon there,” Kirby told reporters at the Pentagon.

The review process, announced by Hagel last spring, is designed to coincide with the U.S. withdrawal in Afghanistan, Kirby said.

With thousands of solders, sailors, airmen and Marines scheduled to rotate back to American shores in the coming months, department officials want to ensure those service members are adequately recognized for their actions over the 12-year war.

But the Defense Department’s awards process has come under fire over the past several months, drawing scrutiny for its handling of Medal of Honor awardees and its failed attempt to create a new medal for unmanned aircraft pilots.

In April, Hagel cancelled a new medal for unmanned aircraft pilots and cyberwarfare operators that was panned by lawmakers and veterans groups for being ranked above medals that were awarded to troops who saw combat.

The Pentagon chief scrapped the so-called the Distinguished Warfare Medal for a device that would be attached to existing medals in order to recognize the achievements of drone pilots and cyber warriors.

The Distinguished Warfare Medal would have recognized unmanned aviators and other troops in cyber warfare. It was canceled in April, 2013. DoD Photo

Hagel’s decision to abandon the drone medal, which was created in February by former secretary Leon Panetta, comes after widespread criticism the medal was being ranked above traditional valor medals like the Bronze Star and Purple Heart.

While Kirby did not address the Distinguished Warfare Medal controversy specifically, he did note the difficult position the Pentagon was in, as modern warfare continues to shift away from traditional to high-tech forms of combat.

“How do you reward the people that do this incredibly difficult work and make sure that they know that they’re valued and that we’re proud of them,” Kirby said Wednesday.

In November, Central Command have launched a command-wide review on why former Army Capt. William Swenson’s Medal of Honor award was mired in Pentagon red tape for months before the Afghan war veteran was granted the commendation.

Whole portions of commanders’ recommendations for Swenson to receive the nation’s highest battlefield commendation were lost or misplaced as the request made its way though the department’s chain of command.

As a result, Swenson received the Medal of Honor for his actions during the 2009 Battle of Ganjgal Valley in October, almost two years after former Marine Corps Cpl. Dakota Meyer received his medal for his role in the same battle in eastern Afghanistan.

A Pentagon investigators found Gen. David Petraeus — then the top U.S. commander in Afghanistan — lobbied against Swenson to receive the Medal of Honor, reportedly due to his repeated criticism of U.S. commanders, whom the former Army captain claims refused repeated requests for air and artillery support during the six-hour firefight in the Ganjgal.

Swenson and his unit of soldiers, Marines and Afghan troops were ambushed by a 60-man Taliban force during a combat patrol through the Ganjgal Valley.

Under heavy fire, Swenson and other soldiers repeatedly moved into and out of the so-called “kill zone” in the valley to pull the wounded to safety, while coordinating the U.S. counterattack.