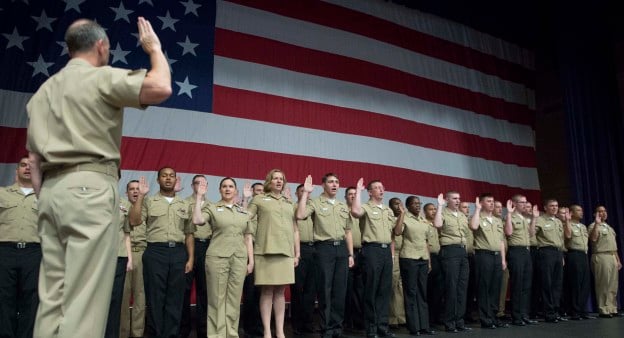 While the Navy and Marine Corps met all their recruiting and retention goals in quantity, quality, and diversity last year, their top recruiters told the House Armed Services Personnel Subcommittee that they are concerned about the future: the economy continues to improve, fewer young people are interested in enlisting, and marketing and bonus budgets hang in the balance.

Testifying on Thursday at the first House hearing in more than a year on recruiting and retention, Rear Adm. Annie Andrews said bluntly that enlisted bonuses help the Navy “get the right sailor to the right place with the right skills at the right time” and that it was a particularly attractive tool in enticing young men and women who do not show a propensity for military service.

That “right sailor . . . with the right skills” has been a theme of Chief of Naval Operations Adm. Jonathan Greenert in the past year to cut down on cross-decking sailors to ensure ships are sailing with properly trained crews.

The Marine Corps’ top recruiter, Maj. Gen. Mark Brilakis took a slightly different approach in explaining his challenge. Rather than selling a potential recruit on a specific skill, “I’m selling the Marine Corps.” To do that his command has been authorized 3,760 recruiters spread out across the country and most of the territories.

Unlike some other commands, his is staffed at 100 percent.
But to meet reduced overall service spending targets, “we’ve made some economies” and “that will be a challenge in the future.” He said that sometime in the future he will have to return to the Marine Corps leadership “and ask for more.”

Like the other services’ top recruiters, Brilakis said reaching potential sailors, Marines, airmen and soldiers in rural areas—where there may be only 25 to 50 seniors at a high school—is time-consuming but necessary if the armed forces are to be drawn from the larger American society. Fifty percent of Marine recruits are between the ages of 17 and 24.
“How do we sell them on service?” he asked.

All the services report that the average age of their recruits remains about 20.

But that 17 to 24 age group is a shrinking population pool, and only one-quarter to one-third of them meet the necessary physical, mental, and moral standards for enlistment.

There are some other initial signs of trouble ahead—showing up first in the Army. Maj. Gen. Thomas Seamands, director of military personnel management, told the panel that at this time last year the Army had in its Delayed Enlistment Program 50 percent of the recruits it would access then. The Army now has only about one-third of its annual mission in the program

Vee Penrod, deputy assistant secretary of defense for military personnel policy, said that all the services now are attracting men and women, of whom more than 90 percent are high school graduates and more than 60 percent are scoring in the top areas on the aptitude tests.
Some committee members expressed concern over waivers—medical, physical, moral, etc.—being given for enlistment, as was done in 2006 to 2008 to meet the manpower demands for the surge in Iraq, particularly. Penrod said specifically that no waivers were being given “for people convicted of sexual assault.”

Andrews said that every Navy recruiter’s record was scrutinized to make sure that there was no history of sexual harassment or crime, and that the service was doing the same with potential recruits, then following that up with training that begins at boot camp to eliminate sexual harassment or assault.

Some on the panel wanted to know how many members of Junior ROTC in high school actually join the armed forces. While saying the 3,400 JROTCs were providing leadership experiences for high schoolers, Penrod said the DOD “does not keep numbers on who joined.”