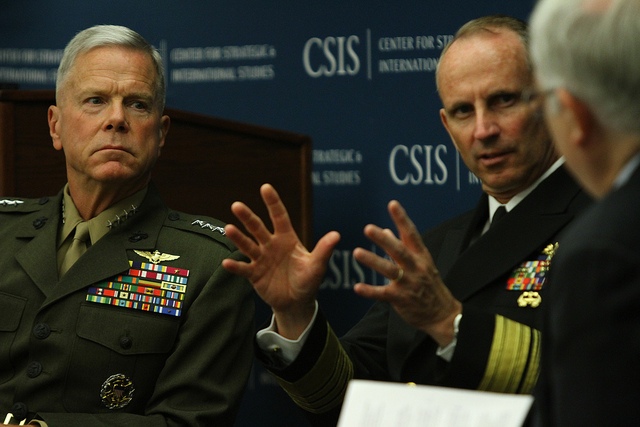 The leaders of the U.S. Navy and Marine Corps gave their bleak assessments of the future of Sea Service readiness under future budget cuts in a hearing before the Senate Armed Services Committee on Thursday.

Commandant of the Marine Corps Gen. James Amos told the committee “We will empty the entire bench.”

Both were addressing the possibility of another round of across-the-board budget cuts taking effect in the coming year.

“The SSBNX (Ohio-class ballistic missile submarine) concerns me the most,” Greenert said about his modernization program. “We’re $500 million behind.”
He said that the time to hire the design engineers to keep the program on schedule is now. “The undersea domain—we have to own it.”

McCain said examples could be found across the services of such overruns. “We may have to impose cuts in your staffs” to control defense costs, he said, noting that “they’ve grown astronomically.”

Greenert said that the Navy is looking at a 25 percent reduction in staff at all levels and among its contractor force.

He added that without reprogramming authority there will be delays in buying one Virginia-class submarine, another littoral combat ship, and the Afloat Forward Staging Base (AFSB), as well as stopping work on carrier Ford this spring.
The long-term effect of those cuts would leave a Fleet of 255 ships in 2020, Greenert said.

Stressing the need for continued forward presence to support regional combatant commanders as the Navy did recently off Korea, Egypt, and Syria, he said, “Quantity has a quality of its own.”

He added the defense guidance calls for 19 submarines deployed overall. “We can support 10 or 11.” He said a similar situation exists with surface ships.

Greenert said that sequestration is not really saving money but “deferring costs” and putting off work on vital shore infrastructure as well as shipbuilding, training, and operations.

Amos said that by cutting back on purchases to meet sequestration and Continuing Resolution restrictions, the costs of individual items rise because the services cannot enter into long-term contracts. “I’m buying planes individually,” he said. “We’re mortgaging the readiness of tomorrow’s” Marine Corps.

Amos said that while the Amphibious Combat Vehicle and the F-35B Marine variant of the Joint Strike Fighter remain his top modernization programs, he had “no money to bring over” from last year’s budget to now. “There’s really no more fat on our bones.”

He said he was “ashamed” of the treatment of Marine Corps civilian employees in the furlough this summer and partial government shutdown in October and the effects of a continuing hiring freeze and pay freezes over the past three years. “Our civilian Marines are a vital part of our team.”

Looking at the size of the force, Amos said by drawing down to 174,000 Marines, the dwell time at home will revert to a 1 to 2 rotation policy, “dangerously close” to the operating tempo while fighting in Iraq and Afghanistan.”

Coupled with the cuts in training budgets, he said that in the future Marines could be moving directly “from the drill field to the battlefield,” a “formula for more American casualties.”
Both Greenert and Amos said that the rising costs of compensation—pay, health care, housing allowances, retirement, etc.—have to be addressed.

“Look at things that may be reversible,” Greenert said about restructuring compensation. “It has to be transparent” to sailors, Marines and their families. Amos said the Marine Corps was already looking at holding down internal costs.