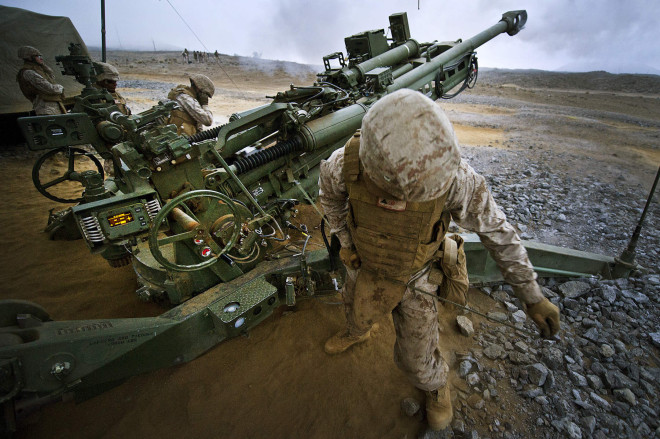 When the assistant commandant of the Marine Corps said, “Virtual presence is actual absence,” the attendees at a special forum Wednesday on “Strategic Landpower” laughed in agreement. Gen. John Paxton said, “We’re committed to getting it right. . . . We’re on board” with developing an agreement among the Army, Marine Corps, and Special Operations Command on future operations on land that acknowledges the “linkage between human actions and strategic outcomes.”

“You need to have someone there. At some point they want to sit, and grip-and-grin, and drink chai, and talk,” he said.

Adm. William McRaven, commander of Special Operations Command (SOCOM), said, “Geography, terrain matter; people have to live somewhere.” Describing his forces—now operating in 90 countries with the approval of the U.S. ambassadors there and the regional combatant commanders—as “the connective tissue between the local population and conventional forces,” he added, “You have to be there—on the ground.”

“We built very strong civil-military networks over the past 12 years, but I worry they will go away” as time passes, budgets decline, and the size of forces and agencies in the federal government decline, Gen. Raymond Odierno, Army chief of staff, told those at the forum, which was part of the Association of the United States Army’s Annual Meeting and Exposition.

McRaven agreed, saying that education had to begin at the junior level across the interagency to understand how the military operates and how the agencies operate.

“The size and capacity of the military overwhelms people,” and there is a fear among the civilian agencies that the military wants to take over policy, he said. “Don’t be afraid of us; use us.”

A start toward that kind of agreement among land forces came in May when Odierno, McRaven, and Gen. James Amos, Marine Corps commandant, signed off on a “Strategic Landpower White Paper.”

Odierno said, “It’s not about competition” for funds among the three. “We’ve got to make the best of our smaller size.”

It also means training together and ensuring that their reserve components are trained to the same standards as their active-duty counterparts, McRaven said. “It has to be ‘total force’ doctrine.”

Technology has its limits in warfare, Gen. Robert Cone, head of the Army’s Training and Doctrine Command, said, noting the “shock and awe” attacks that opened the combat operations in Iraq achieved every established outcome but one—“the capitulation of the enemy.”

Now with even more advanced technology (drones) and more precision strike available, Odierno said there is a growing belief that there is less need for ground combat forces than ever before. “In my opinion, that’s a false assumption.” He added that “at some point capacity is capability,” meaning the force is too small to accomplish the mission.

Paxton noted that the forum was being held on the 30th anniversary of the bombing of the Marine headquarters in Lebanon that claimed the lives of 241 Marines, sailors and soldiers sent on a peacekeeping mission to Beirut. It was an event that was unpredicted but in many ways foreshadowed events in the Middle East since.

Odierno added, “I wish we started this [dialogue] two years ago” as combat in Iraq ended and defense budgets provided more flexibility.