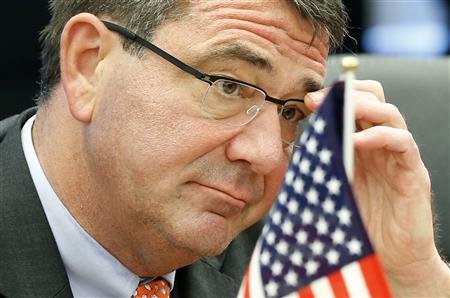 Rep. Howard “Buck” McKeon (R-Calif.) and most other members of the committee, and Ashton Carter and Adm. James Winnefeld, vice chairman of the Joint Chiefs of Staff, used the Thursday hearing to try to make the case that while sequestration was bad for the Defense Department in Fiscal Year 2013—matters would become progressively worse in the coming fiscal year.

“The findings [of the Strategic Choices and Management Review], are sobering. The things we have to do under sequestration are not strategic. They’re dumb,” Carter said, looking at next year’s potential $52 billion in additional cuts.

In presenting the review at the Pentagon, Defense Secretary Chuck Hagel said that there were three scenarios laid out in detail: full sequestration [reducing the number of Navy aircraft carriers to eight or nine from 11], adopting the president’s proposed budget for FY 2014, or a middle ground [reducing the Marine Corps to 175,000].

Carter, who with Winnefeld led the review, “showed that cuts in combat power, force structure and investment will be necessary” in all of the scenarios. The land forces—Army, Marine Corps. and to some degree Special Operations—would take the largest personnel cuts. The Army would drop from 490,000 active-duty soldiers under current plans to perhaps as low as 380,000 under the full sequestration scenario. The active-duty Marine Corps would drop from 182,000 under current plans to as low as 150,000 in that same scenario.

There also would be a drawdown in Air Force tactical squadrons in all three scenarios.

Winnefeld said it was a case of trying to balance, ends, ways and means. “I don’t want to fight the last war,” which would mean retaining promising Science and Technology and Research and Development programs, such as unmanned carrier-launched surveillance and strike, alive. “I believe in the program,” he said, adding that he sees it as a “very important element of what we would put on the deck of an aircraft carrier.”

“Over time” was a phrase that Carter and Winnefeld used several times during the hearing to describe how cuts should be made, as opposed to immediate and draconian reductions as called for under the Budget Control Act of 2011.

But there are no guarantees of program survival.

“The most damaging [aspect] is the speed of the cuts” called for under the law, Winnefeld said. The Pentagon then “grabs money wherever we can—modernization and investment [in the years ahead]” largely protected in the first round become more vulnerable as the readiness accounts were this year and into the future. “It’s like starting that race [to find money] when you are already out of breath” from the first cuts.

At the Pentagon press conference, Hagel said scenarios to preserve end strength and force structure while not reforming compensation would lead “to a decade-long modernization holiday.”

Carter said the department is not waiting for the next Quadrennial Defense Review—due next year—to look at achieving efficiencies in operations and information technology and also recalling that Congress has for years rejected requests to overhaul military compensation—from TRICARE fees and co-pays to base pay and bonuses—or approve another round of base closures and realignments.

“Compensation alone makes up over half of the defense budget,” Carter said. “These reforms are difficult and painful,” but if they are not made and sequestration goes into effect, new rounds of furloughs may be in the offing in the coming year and possibly reductions in force among the Pentagon’s 800,000 civilians, as well as involuntary separations in the armed forces.

“Once you eliminate a skill set, it’s very hard to bring that back,” Carter said in answer to a question of possible reductions in force in depots and shipyards. He responded to another question that the department was considering having the services do joint work—for example on helicopters that are used in all the services—to distribute workload. “Why not have one place” to make those repairs, he asked.

The only bright note sounded for civilian defense workers was “we hope we will be able to adjust the furlough level” down from 11 days, Carter said. The question is “can we find the money somewhere?” He pointed to possible savings in Afghanistan operations and lower fuel prices, which might allow the department to shift money into the civilian personnel account.

Carter and Winnefeld said that they also are examining the chairman’s risk assessment and asking the regional combatant commanders to go over their operational plans.

“The president’s strategic guidance would be the point of departure” in these examinations, but it “is embarrassing and unsafe to be in the situation we are in,” Carter said.

Winnefeld said without relief from sequestration the department is “trapped in a strategic no-man’s land.”

As to how the present cuts are affecting service member’s willingness to stay on and attract new recruits, Winnefeld said, “Today’s readiness crisis is tomorrow’s retention crisis,” that is, money for training is critical. Later, he added that if reforms weren’t made in compensation there are three other ways to achieve savings: stop bringing people in, stop promoting them, and stop moving them,” as well as dipping into the modernization accounts. “Readiness is the elephant in the room. . . . We will definitely see those effects next year.”