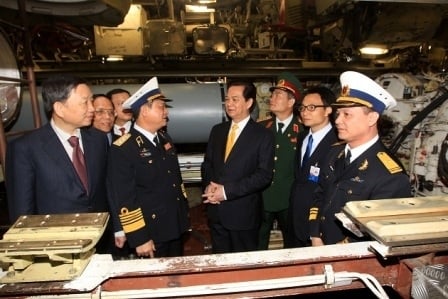 Russia will deliver the first of six improved Project-636 Kilo-class submarines to the Vietnamese Navy in November, according to a press release issued by the shipbuilder.

“We are expecting the signing of the acceptance act and the sub’s sailing to Vietnam in November,” according to a Monday release from Admiralteiskie Verfi shipyard in St. Petersburg.

Previous estimates had the first two subs delivering in September.

The first boat completed sea trials in July while a Vietnamese crew has been training on the boat since April, according to the statement.

“The vessel showed excellent maneuverability and reliable work of all mechanisms during the trials,” the statement said.

The delivery of the boat is part of a 2009 deal worth $1.8 to 2.1 billion. Vietnam has ben a vocal critic of Chinese expansion into the South China Sea and the submarines are thought to help bolster Vietnam’s claims to its territorial waters.

“The Project 636 Kilo-class submarine has been dubbed the ‘black hole’ by the U.S. Navy for its level of quietness,” wrote USNI News contributor Carlyle A. Thayer in 2012.
“The Project 636MV-class sub has improved stealth features through the removal of flooding ports and treating the hull with multilayer anechoic rubber tiles. The tiles are fitted on casings and fins to absorb active sonar waves that reduce and distort the return signal. The anechoic tiles also shield sounds from within the submarine thus reducing the range of detection by passive sonar.”

Other nations in the region have been increasing their naval presence in the South China Sea.