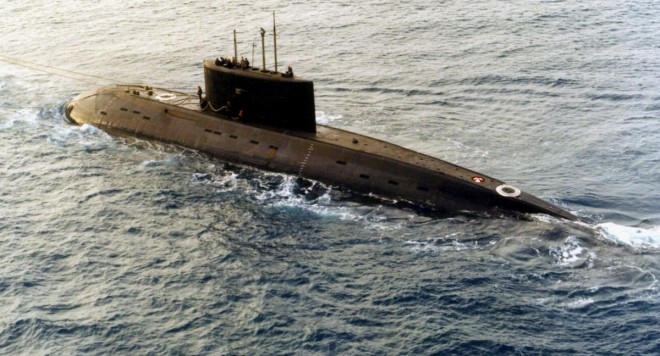 Vietnam’s interest in acquiring a full-size conventional submarine was apparently whetted in 1997 as a result of a visit by a Russian Project 636 Kilo-class submarine to Cam Ranh Bay. In 2000 there were unconfirmed reports that Vietnam and Russia had reached a memorandum of understanding covering the possible sale of submarines. Also that year, Vietnam and India signed a defense agreement that included a provision for the Indian navy to provide training for Vietnamese naval personnel including submariners.

In October 2002 Vietnam asked India to provide submarine training, but another four years passed before India announced it would commence training for Vietnamese naval cadets and officers. Currently India is providing training in submarine escape procedure to Vietnamese naval personnel.

The year 2008 marked a major turning point. Vietnam unsuccessfully sought to acquire conventional submarines from Serbia. It then turned to Russia and reached an agreement in principle to purchase six Project 636M Kilo-class submarines. During 2008 Vietnam’s defense minister and state president made separate visits to Moscow to clinch the deal.

In 2009 Russian industry sources went public. On April 24, Vladimir Aleksandrov, the general director of Admiralteiskie Verfi (Admiralty Shipyard) in St. Petersburg, announced that his company had been identified to execute a contract for six Improved Kilo-class Project 636 submarines. The submarines were priced at US $300-350 million per unit or $1.8-2.1 billion in total.

The formal contract to purchase the six Kilos was signed in Moscow by the Russian arms exporter, Rosoboronexport, and the Vietnamese Ministry of National Defense in December 2009. The signing was witnessed by President Vladimir Putin and Prime Minister Nguyen Tan Dung. Admiralty Shipyards began construction of the first of six submarines with a keel-laying ceremony on August 24, 2010. This submarine was is scheduled to be launched on August 28, 2012 and will undergo a series of sea trials before delivery to Vietnam.

The Russia-Vietnam submarine contract also included provisions for — in addition to the delivery of the six submarines — crew training and the construction of an on-shore maintenance facility. In March 2010, Vietnam formally requested Russian assistance in constructing a submarine base at Cam Ranh Bay.

The Project 636M submarine is officially designated the Varshavyanka-class by Russia; it is more widely known by its NATO designation, the Kilo-class. The Kilo is a non-nuclear fast attack submarine (SSK). It can perform the following missions: anti-submarine and anti-shipping warfare, coastal defense, mine laying, general reconnaissance and patrol.

Vietnam has ordered the latest variant the improved 636MV. It has better range, speed, reliability, sea endurance, acoustic characterizes and firepower than its earlier variant.

The Project 636 Kilo-class submarine has been dubbed the “black hole” by the U.S. Navy for its level of quietness. The Project 636MV-class sub has improved stealth features through the removal of flooding ports and treating the hull with multilayer anechoic rubber tiles. The tiles are fitted on casings and fins to absorb active sonar waves that reduce and distort the return signal. The anechoic tiles also shield sounds from within the submarine thus reducing the range of detection by passive sonar.

The Project 636MV submarine has six 533-mm forward torpedo tubes. It can carry 18 torpedoes (six loaded in the tubes and 12 in racks) or 24 mines (two in each tube and 12 in racks). Two of the torpedo tubes are designed to fire remote-controlled torpedoes with very high accuracy. The improved Kilo can also fire anti-ship cruise missiles from its torpedo tubes. The Kilo also carries MANPADS Strela-3 antiaircraft missiles.

In June 2010 it was reported that the total cost of Vietnam’s submarine package had risen from the original estimates of $1.8-$2.1 billion to $3.2 billion. The additional costs included armaments and infrastructure construction. Industry sources report that Vietnam’s Kilo-submarines will be equipped with either the 53-56 or TEST 76 heavy torpedoes. Industry sources also speculate that Vietnam’s Kilos will be kitted out with anti-ship missiles, such as the 3M-54E or 3M-54E1. In July 2011, Oleg Azizov, a representative of Rosoboronexport, confirmed that Vietnam will take delivery of the deadly Novator Club-S (SS-N-27) anti-ship cruise missile with a range of 300 kilometers.

Vietnam is acquiring Kilo-class submarines for operations in the relatively shallow waters of the South China Sea. When they commence operations they will enhance Vietnam’s maritime domain awareness about the operations of foreign paramilitary and naval vessels in waters off Vietnam’s coastline and in waters surrounding the Spratly Islands. In addition, the Kilo submarines will provide a deterrent against the contingency that China might attempt to quickly seize an island or feature occupied by Vietnam in the South China Sea. More generally, the Kilos will provide a modest but potent anti-access/area denial capability against intimidation by Chinese People’s Liberation Army Navy warships.

Before Vietnam acquires these capabilities it will have to absorb the Kilos into its force structure and transition from a two-dimensional (surface and air) to a three- dimensional force. Vietnam will also need to find the funding for maintenance and repair to keep the Kilos operational and develop a capable submarine rescue capability. Industry analysts predict that Vietnam will fall somewhere between Singapore and Indonesia in its ability to absorb the Kilos and produce effective capability. These analysts say much depends on sustained Russian and Indian support over the coming years for Vietnam to develop a truly modern submarine fleet.