In an era of tightening budgets and with the wars in Iraq and Afghanistan winding down, the need for as many large ships, like Arleigh Burke guided missile destroyers (DDG-51), in the Navy’s 5th Fleet is less, said Destroyer Squadron 50 and Combined Task Force 55 (DESRON50/CTF-55) commander Capt. Joseph Naman.

“Our numbers of DDGs we have out here have declined over the past year. [PCs] are picking up a lot of the missions they were doing, ” Naman said.
“It doesn’t mean we are going to do away with the DDG. They still have a mission here.”

By 2014, the Navy will have ten Cyclones home-ported in Bahrain to operate in the Arabian Gulf and as far afield as the Gulf of Oman, Naman said.

The ships have a range of missions including providing security for infrastructure, like off-shore oil platforms, as well as providing close-in protection for larger ships like DDGs that provide a ballistic missile defense shield for the region. 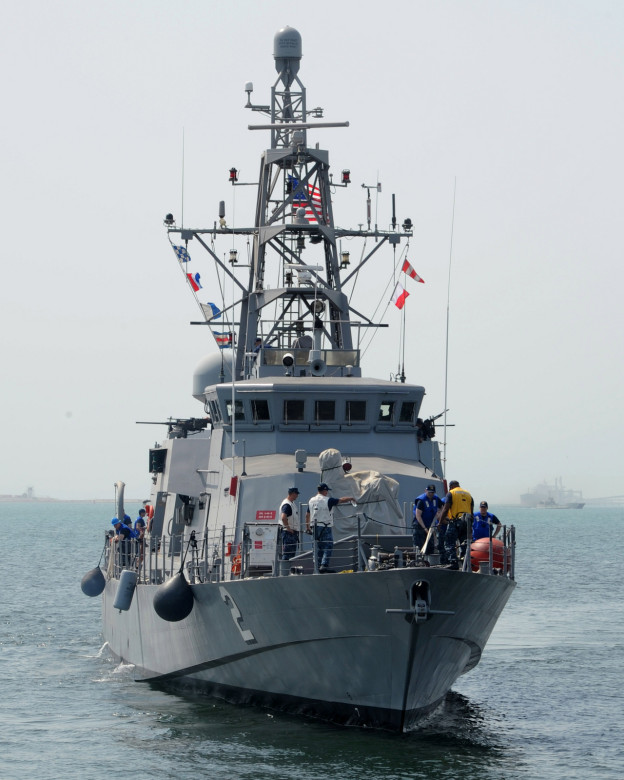 “They are perfectly suited for what we do in the 5th Fleet area of responsibility,” Naman said.
“It’s more cost effective and we can go more places with the PC based on the draft alone.”

The PCs are small — about 385 tons — but are heavily armed and armored for their size. Each ship is fitted with twin 25mm stabilized guns and several machine gun and grenade launcher mounts.

Additionally, the Navy plans to expand the capability of the ships by including Raytheon’s Griffin missile, currently in use by U.S. Special Operations Command and in testing for use aboard the planned Littoral Combat Ship (LCS).

In December, the Navy conducted a series of tests of the 33-pound missile, with a range of about 3.5 miles, onboard Monsoon.

Three PCs will also be moved to Naval Station Mayport, Fla. for operations in the Navy’s 4th Fleet, around Central and South America, Naman said.

When contacted, a 4th Fleet spokesman said the command hasn’t not received official notification the ships would move to Mayport.

If PCs are assigned to Mayport, they will likely embark Coast Guard law enforcement teams to fill in the U.S. drug enforcement mission left vacant when the Navy pulled surface ship support for trafficking interdiction.