Currently, NAVSEA is testing the Raytheon Griffin IIB as part of the Surface Warfare (SuW) mission package, only, “as an interim capability,” according to a statement provided to USNI News.

“Subject to funds availability, detailed work on the solicitation contents could start in FY 2014,” NAVSEA said.
“Since this is planned competitive procurement, additional details will be released in the future, as required by Federal procurement regulations, by the cognizant contracting activity.”

The surface-to-surface missile is major missing component of the SuW package. A joint missile with a 25-mile range under development by the Army and the Navy — NLOS-LS — was deemed too expensive and canceled after more than $1 billion in development funds. 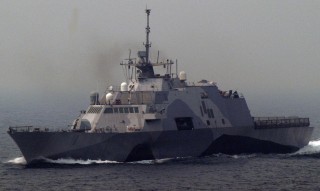 The Navy selected Griffin in early 2011 as an interim capability. The Griffin is 43-inch missile was developed for U.S. Special Operations Command (SOCOM) and weighs 33 pound with a 13 pound warhead. The missile is GPS guided and has been thought to have been used by SOCOM from airborne platforms. There is also a ground variant, though the surface-to-surface version only has a range of about 3.5 miles.

Last year the missile was successfully tested by the Navy engaging small boat targets, according to the company.

“Right now, this version of the Griffin probably doesn’t ultimately have enough range for this customer so we’re on LCS increment 1 with this Griffin, but what we need to do is, with what we’re calling a Sea Griffin, we need to put a bigger motor on the Griffin and give it some more range,” said Harry Schulte, vice president of air warfare systems for Raytheon’s missile systems business last week in a June, 23 report in Defense News.

Other competitors for the next increment could include the Sea Spear from European firm MBDA, reported Defense News.