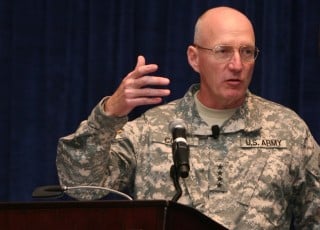 “We need to prepare the land force [Army, Special Operating Force and Marine Corps] for a sophisticated understanding of the human dimension and human domain,” and invest in it, Gen. Robert Cone, commanding general of U.S. Army’s Training and Doctrine Command, said.

When the coalition entered Iraq in 2003 it did not understand the Iraqi will that turned a battlefield defeat into a persistent insurgency that continued for years.

Cone said few in the coalition spoke the language, understood the culture or knew about tribal loyalties. Instead, the focus was on “target lists and order of battle” to defeat the Iraqis.

“We have to think about [all those areas] as a defeat mechanism,” Cone said.
To better understand the dynamics of different parts of the globe, the Army is realigning its units with different regions.

For example, I Corps is now aligned with Pacific Command and a brigade from the 1st Infantry Division is sending a brigade to Africa to conduct missions that combatant commander considers essential.
“We’re putting our sergeants and junior officers on the ground,” Cone said.

At the same time, his Asymmetric Warfare Group is looking across the globe to identify potential areas of conflict and looking at ways to head them off through working with other governments in a number of areas.

“The future environment will be highly complex as the velocity of human interaction is accelerating” as it did with social media during the Arab Spring.” The future will be filled with “ambiguity and illusion” that require better-trained and educated service members.

For the Army that also means closing the education gap in its field grade and noncommissioned officer ranks created by 12 years of war.

Cone said that 5,000 majors and 35,000 NCOs were promoted without attending the usual courses required for higher rank.

Cone challenged industry to look to smaller, handheld devices” rather than large, cumbersome simulators.
“How do you make training real?”