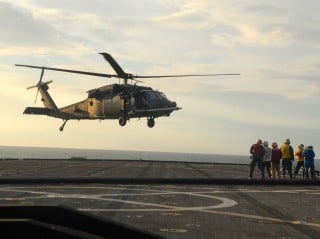 By June, the U.S. Army will open positions to women in its most elite Special Operations helicopter unit as part of a Pentagon push to include more than 6,000 women in previously closed jobs in the Army and U.S. Marine Corps, according to documents obtained by USNI News.

Women will now be considered for roles as pilots and maintainers in the U.S. Army’s 160th “Night Stalkers,” Special Operations Aviation Regiment (SOAR), jobs in U.S. Marine Corps Air Naval Gunfire Liaison Companies (ANGLICO) and positions in Army Brigade Combat Teams, according to an April 11, notification to Congress signed by Acting Under Secretary of Defense for Personnel and Readiness, Jessica Wright.

“These positions will expand the number of unrestricted positions within occupations partially open to women and will both broaden women’s opportunities and increase the ability of the services to assess performance and inform future changes in assignment policy,” Pentagon spokesman Lt. Cmdr. Nate Christensen told USNI News on Thursday.

The 160th is the last bastion of male-only aviators in the U.S. Army. The unit is perhaps best known for transporting and providing support to U.S. Navy SEALs on the May, 2011 for raid that killed Osama bin Laden. Marine ANGLICOs provide air and artillery fire support for units that work with Marine Air Ground Task Forces (MAGTFs).

The openings were planned well ahead of former Secretary of Defense Leon Panetta’s February announcement lifting the 1994 rule that banned women in combat units, according to a congressional staffer who spoke to USNI News on Thursday.

Though women had served in the individual roles in the U.S. military, they were prevented from serving in the specific units in the Army and Marines by the 1994 rule.

The current expansion will not require a change to the current male-only selective service law that requires men living in the U.S. to register for the draft, said Christensen.

The announcement of the new jobs comes ahead of the May, 15 deadline for the services to submit their plans to Secretary of Defense Chuck Hagel on how to integrate women into the 230,000 combat jobs which are still closed to women.