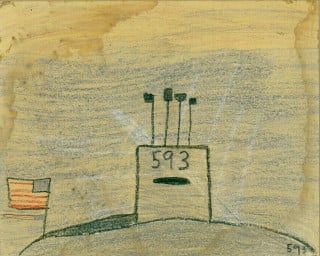 “USS Thresher/ Bruce Harvey/ crayon,” reads its art-museum-style description. “The young son of Commander John Harvey, skipper of Thresher, drew the boat on the ocean floor after hearing of its loss. Bruce’s father and 128 other men died when the submarine sank off the New England coast.”

Thresher (SSN-593), at the time the Navy’s fastest and most powerful submarine, represented a leap forward in the Cold War fight against the Soviets. When she put to sea for the last time in April 1963, she represented the bleeding edge of undersea warfare.

“This was just incredible technology,” Bruce Harvey told USNI News in a recent telephone interview. “These guys were the first. . . . It was just like the astronaut program, if you were there the first five years, you saw something different from what everybody else saw.”

Nautilus proved to the world—and the Soviets—that the only limit to the range of a nuclear submarine was the amount of food the crew needed.

Thresher was designed to be better.

“Thresher was the fastest, deepest diving, most capable submarine in the word,” Rear Adm. David Duryea, Naval Sea Systems Command’s, deputy commander for undersea warfare told USNI News in a recent interview. “This was the pride of the U.S. Navy.”

On 9 April 1963, Thresher put to sea to conduct a series of sea trials following an overhaul accompanied by USS Skylark (ASR-20), a Penguin-class submarine rescue ship, according to the 1975 book The Thresher Disaster.

The next morning, Thresher descended to 1,000 feet in a deep-diving test.
Forty-six minutes after reaching test depth, things began to go very wrong.

Thresher suffered a mechanical failure and Harvey’s attempts to bring the boat to the surface failed.

Four minutes after Skylark learned there were problems, Thresher sent her last garbled transmission, “exceeding test depth.” One minute later Skylark detected a noise that shared the characteristics of an implosion.

The next day, Navy officials announced the ship was lost.

He heard a story from former Portsmouth Mayor Eileen Foley, who was at the yard the day workers received word of the loss.

“She talked about how people came together in the center of the shipyard. Nobody said ‘go home.’ It was eerily quiet and everyone just went home. They couldn’t deal with knowing that the work that was done at the yard might have had something to do with the loss of the Thresher,” McCoy said. “We now know it was fundamental design issues. It wasn’t anything that anyone in the yard had done.”

By June of 1963, the Navy had adopted a new set of standards for submarine design and construction called SUBSAFE. The rigorous sets of standards tightened the design, manufacture, and maintenance of submarines. The Navy hasn’t lost a single sub constructed under the program. From 1915 to 1963 the service had lost 16 boats to non-combat-related causes.

“Having met hundreds of Thresher family members, they all say the same thing: ‘Don’t ever let this happen again’,” McCoy said.

Still, 50 years after the institution of SUBSAFE and countless investigations later, the details of Thresher’s sinking are still fodder for debates over matters such as valves or metal fatigue—and also provide fuel for conspiracy theories.

For Bruce Harvey, the truth is much simpler.

“We didn’t think too much about why. We knew that something happened to the submarine and it sank,” he said. “We knew that our father wasn’t coming home again.”