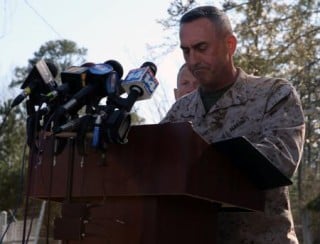 A 60mm mortar malfunction is being blamed for the Monday death of seven North Carolina Marines killed at a Nevada training ground, Marine leaders said on Tuesday.

“A mortar round exploded in the mortar tube causing the deaths of seven and injuring seven others,” said Brig. Gen. Jim Lukeman, 2nd Marine Division Commanding General, in a press conference at Camp Lejeune, N.C. on Tuesday.

“We don’t know yet what caused this malfunction. A team of investigators has begun the investigation, to figure out just what happened.”

The blast at the Hawthorne Army Depot, Nev. also injured six Marines and one sailor.

The Marines were assigned to 1st Battalion, 9th Marines, according to Marine Corps Times.

Pending findings from the investigation, the Pentagon has banned the use of 60mm rounds in training and in Afghanistan combat, The Associated Press reported.

The Lejeune Marines were in the midst of a month of training at Hawthorne and Marine Corps Mountain Warfare Training Center near Bridgeport, Calif.

“When we’re out there on a deployment for training, [Hawthorne] is a very useful venue for us to use,” Lukeman said.

The identities of the Marines will be released following notification of next of kin, Lukeman said.

The Marines and the U.S. Army regularly use the M224 mortar system in Afghanistan. The company level mortar has been in use since the late 1970s.