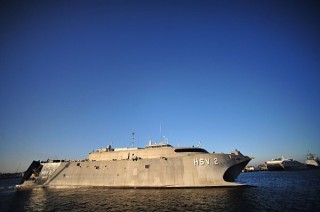 In May, the HSV-2 Swift will conduct a drug interdiction patrol in South and Central America – the first for the high-speed catamaran, 4th Fleet spokesman Lt. Cmdr. Corey Barker told USNI News on Tuesday.

Swift, an aluminum catamaran originally designed as a fast ferry, will fill the role traditionally reserved for U.S. Navy frigates and U.S. Coast Guard cutters. Leased by the Navy and run by U.S. Military Sealift Command, Swift has been a test bed for the Navy and MSC in SOUTHCOM and U.S. Central Command.

Like the Oliver Hazard Perry-class (FFG-7) frigates, Swift will deploy to U.S. Southern Command with a Coast Guard Law Enforcement Detachment (LEDET) and patrol the Caribbean and the Eastern Pacific Coast, Barker said.

Swift’s deployment could inform the next generation of SOUTHCOM military surface combatants in the drug fight.

Earlier this month, the Navy announced it would pull the two frigates tasked with interdicting drug runners in SOUTHCOM due to cuts from sequestration and a yearlong Continuing Resolution for Fiscal Year 2013.

Currently cutters and frigates, with the help of U.S. Air Force and Navy reconnaissance aircraft, intercept a third of the drug traffic coming from South and Central America.

But a day could come when SOUTHCOM, “has no assigned [Department of Defense] surface assets to conduct detention and monitoring operations,” Kelly said. 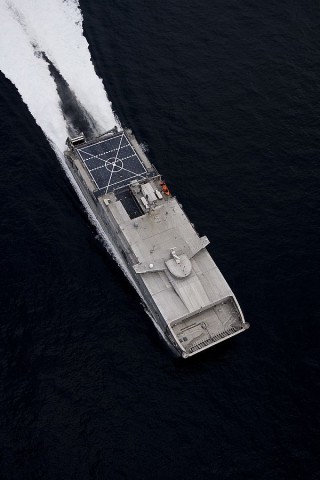 Built by Austal USA in Mobile, Ala., the JHSV is a catamaran with the ability to move fast and deploy LEDET teams the same way current cutters and frigates do.

USNS Spearhead (JHSV-1), the first JHSV, recently delivered to the fleet. Following the ship’s completion of its post shakedown availability at the end of the year, “it will be ready for assignment, which depends on the Navy’s needs,” MSC spokesperson Jessica Alexander told USNI on Tuesday.

Fourth Fleet leadership are already interested in the JHSV for operations in SOUTHCOM, following a Feb. 14 port visit to Naval Station Mayport, Fla.

“Spearhead is a perfect match for 4th Fleet and we plan to use it across all of our lines of operations; security cooperation activities, maritime security operations and contingency operations,” U.S. 4th Fleet commander, Rear Adm. Sinclair M. Harris said in a statement.

The ship has a range of 1,200 nautical miles, can transport up to 600 tons of troops and material and can cruise at 35 kts. A crew of 22 MSC civilians operates the ship, far less than the 200 of a Perry-class frigate.

Spearhead is one of ten JHSVs planned for MSC as part of a $2.5 billion program. The second ship, Choctaw County, is plans to be delivered to the fleet later this year.