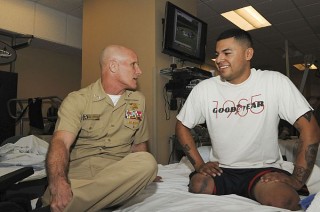 Wounded Warrior programs and TRICARE beneficiaries are at risk due to the ongoing budget uncertainty, the Pentagon’s top health official told the House Armed Services Committee on Wednesday.

“How we sustain our robust capability to provide mental health care to our service members and families” for the rest of this fiscal year is an unanswered question, Jonathan Woodson, assistant secretary of defense for health affairs, said.

More than 50 percent of the department’s behavioral health specialists are civilian employees and face up to 22 days of unpaid leave through September,

The challenge could become greater if the Pentagon is not given some flexibility in moving money from one program to another. “Our work force is looking at what we are doing. They have options” of leaving the military care system and returning to the private sector. “I worry about sustaining the work force.”

Not all service members in Wounded Warrior units were wounded in combat.

Marine Lt. Gen. Robert Milstead, deputy commandant for manpower and reserve affairs, reminded the panel that 44 percent of the Marines in the Wounded Warrior Regiment are being treated for non-combat injuries or conditions like cancer.

The Military Health System’s priority now under sequestration and the constraints of the Continuing Resolution is to ensure that “we will not place any patient at risk, period,” Milstead said.

Woodson warned that to pay for Wounded Warrior care there will be reduced access to routine care as his 58,000-plus civilian health care providers, technicians, administrators and clerks are furloughed. At the same time, civilian physicians who are in the TRICARE program might find the department paying their claims more slowly than in the recent past.

“That is clearly a risk” for the long term with physicians opting out of the program or taking no more new patients for the 9.7 million TRICARE beneficiaries.

He also cited the impact of the cuts and constraints on medical research and development, such as what recently lead to fielding advanced prosthesis, as being affected not only in the military but through terminating or curtailing its grant programs with other institutions. “Grants will be slowed” and that “has potential long-term impact” in improving care.

To find money for continued care, like the services on bases and camps, there will be “reduced military medical facility maintenance” even in the system’s older structures.