Proceedings, November 2012
Both are Navy-owned deep submersibles. One was retired in 1963, while the other is still active. But their histories are related.

The bathyscaph Trieste joined the U.S. Navy in 1958. Based at the Naval Electronics Laboratory (NEL) in San Diego, she was deployed to Guam for a series of deep dives in 1959–60 that included one to the deepest place in the ocean. 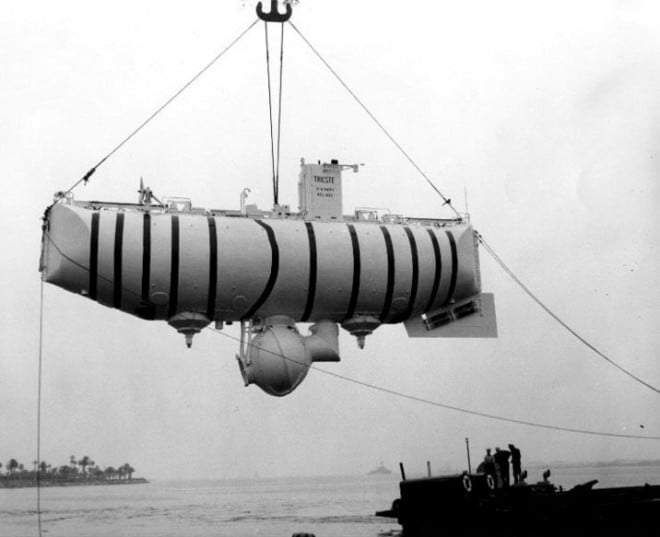 By early 1961 the NEL team had nearly three years’ operational experience with the Trieste, and much had been learned about this new technique of ocean exploration. While the bathyscaph had no depth limit, it was also very fragile. When fully loaded she had to be towed to dive sites at a stately five knots. Calm seas were a must and not always guaranteed. The paradox was the Trieste could dive at any place in the world’s oceans, but you could not get her to the dive site. It was not until the 1970s that a mother ship (floating drydock) was provided to transport her long distances. At San Diego each operational dive cycle took about seven days. Most of the dives were to 4,000 feet or less. These “shallow-depth” operations were costly, time-consuming, and sometimes only marginally safe.

There was a need for a smaller submersible that could be carried aboard a ship of opportunity, submerge to 6,000 feet with a three-person crew, and make repetitive dives while on site. So the Trieste team began to develop concepts for such a vehicle. In 1961 there were only six to eight manned submersibles in the world, so this was very much a “clean sheet of paper” approach.

In developing the proposal, the team got significant help from an unlikely source—General Mills Inc. It was building a remotely operated mechanical arm, the first for a submersible, for the Trieste. The company had a division that built remote arms for handling radioactive materials, and it a sent a former aeronautical engineer, Harold “Bud” Froehlich, to NEL to adapt that technology to underwater operations.

During the time Bud was at NEL, he and the Trieste team also brainstormed the idea of developing a small submersible. Eventually they worked out a conceptual design proposal. Named the Sea Pup, she was approved by NEL leadership, and a proposal was made to the Office of Naval Research (ONR).

The Trieste Program was supported by ONR’s Submarine Warfare Branch, headed by Captain Charles “Swede” Momsen. When he was briefed on the Sea Pup concept, he was elated: “We have got to get one of these!”

Then he said, “We will send it to Woods Hole for them to use as a trainer.” Understandably, the Trieste team was very disappointed.

Earlier, Momsen had arranged to lease the 80-ton, four-person Reynolds Aluminaut. She had an aluminum pressure hull designed to dive to 15,000 feet, but technical problems restricted her to 7,500 feet. About $1 million in ONR funds already had been committed to the Woods Hole Oceanographic Institution (WHOI) to acquire the necessary support equipment and people. Oceanographer Allyn C. Vine was selected to be one of the project leaders

Then when he thought he had a deal, Momsen learned that Reynolds intended to significantly raise the lease cost. So he quickly shut down the negotiations. His ultimate strategy was that the advent of the Sea Pup at WHOI would force Reynolds back to the bargaining table—the Aluminaut was still the preferred submersible.

Procurement was initiated, and General Mills won the contract to build the new submersible. Before she was completed the company sold the division to Litton Industries, which launched her in mid-1964. The 16-ton vehicle was a larger and considerably improved version of the Sea Pup. She would be owned by the Navy but operated by WHOI. As a well-deserved honor for Al Vine, she was named the Alvin.

Over her nearly 48-year history, the Alvin became the most productive manned submersible in the world. She has now made more than 4,400 dives, taking 2,500 scientists’ trained minds and eyes into the depths. Originally designed for diving to 6,000 feet, she has had multiple upgrades and is now rated for 14,750 feet.

The Alvin is now completing another major upgrade that will ultimately increase her depth rating to 21,325 feet. A new titanium pressure hull has been built along with major external modifications. At present no firm date has been set to complete the greater depth conversion. The delay is not technical; it’s related to funding issues. By the end of this year the Alvin is slated to go back into service with her new hull and upgraded equipment, although maximum operating depth will remain 14,750 feet.

While the Trieste never got her “little sister,” the NEL team was always proud that it had a small role in the initial creation of the Navy’s second manned submersible—one that became more famous than the Trieste.