“Any ship can be a minesweeper –- once,” goes the old naval joke, but top American commanders in the Middle East are not laughing. Amid the roller coaster of tensions with Iran and a new high-level order to confirm that it can “shoot straight,” the Navy is beefing up its mine warfare capabilities in the Persian Gulf.

This year the Navy plans to double the number of Avenger-class mine countermeasures ships forward deployed to the key port of Manama, Bahrain; increase the number of MH-53E Sea Dragon helicopters stationed there; and repurpose an old amphibious transport into a new “afloat forward staging base” to help with the mine warfare mission.

Commanders hope the new combination of ships and aircraft will enable the Navy to at least improve the way it hunts and clear mines, if not offer chances to develop new methods to handle the nettlesome “weapons that wait.” The addition of the staging base, the former amphibious transport dock USS Ponce, adds a potentially interesting new dimension to how the Navy handles mine warfare. 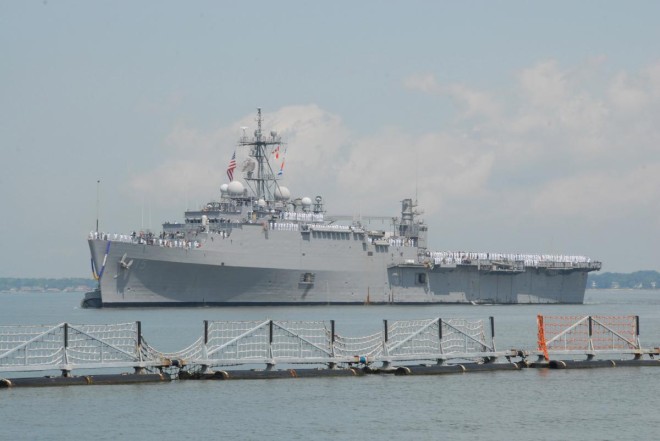 To all appearances, mine warfare needs a breath of fresh air. The Navy has mostly neglected it for the past decades. Even though mines have damaged 15 U.S. Navy ships since World War II as compared with four ships damaged by attacks from the air, mine warfare only receives intermittent flashes of attention from surface-warfare leaders.

For a time, the Navy toyed with the idea of equipping its Arleigh Burke-class destroyers with a remotely operated vehicle that could swim out ahead to help search for mines; it even equipped a series of ships with a special side door to handle the vessels. That concept fell by the wayside. The fleet struggled to make the destroyers’ remotely operated vehicles work as hoped, and the Navy began to question whether it made sense to risk a valuable multimission escort such as a destroyer with hunting mines.

Today, the Navy brass pins its hopes on the mine clearance equipment it’s developing for its new Littoral Combat Ships: The ships’ helicopters and unmanned systems are supposed to sniff out and neutralize mines safely away from their human crews. But that equipment, and the ships to operate it, won’t be ready for years. So to put itself in the best possible position to deal with a Persian Gulf mine threat today, the Navy had to make do with what it had on hand.

According to Fleet Forces Commander Adm. John Harvey, the use of the Ponce came about because of a happy accident. He told reporters earlier this year that there’d been a request for an afloat forward staging base in Central Command since even before he’d taken his job in 2009. When CENTCOM boss Gen. James Mattis “reiterated” that need, Harvey noticed it coincided with the planned decommissioning of the Ponce and that, he said, was that.

The Ponce will remain a commissioned warship, with a naval officer as its commander, but it’ll also rely on a crew of Military Sealift Command civil-service mariners, much like the Navy’s amphibious command ships or hospital ships. MSC’s civmars are some of the saltiest mariners in the world, and their experience means the Navy can field far fewer of them than a crew of junior sailors, with a potential savings in cost.

The Ponce has several attributes that make it appealing in a mine warfare situation: Its large flight deck, which can accommodate Sea Dragons, the Navy’s workhorse MH-60 Seahawk, and other rotorcraft; its well deck, which could hold patrol boats, barges, or transport vessels; and its vehicle stowage areas, which provides ample room for spare parts or specialized equipment.

The Ponce theoretically could even serve as a mother ship for unmanned vessels, if they were available –- sailors could deploy them from inside the well deck or using the ships’ topside cranes. Surface commanders today prize the same versatility the ship was originally designed to give the commander of an amphibious operation.

The U.S. Navy and its allies have spent years experimenting with this versatility, albeit in different venues. In the northern Persian Gulf, for example, the Royal Navy fleet auxiliary RFA Cardigan Bay used its well deck to host small patrol boats guarding Iraq’s oil terminals. Its flight deck served as a lily pad for helicopters. Its ability to keep station and handle that kind of administrative support work freed the warships and U.S. Coast Guard vessels in the area to focus on their patrols.
The Ponce could take that same kind of role in a major minesweeping operation. It could deploy with a squadron of mine countermeasures ships, carry a few Sea Dragons, and greatly increase the endurance of all of them. Not only might the Ponce’s capacious internal stowage mean it could supplement the Avengers’ food or stores, its flight deck would give the smaller ships, which have no flight decks, a way to be resupplied by air. Navy or Marine Corps helicopters could deposit just-in-time spares or other essentials on the Ponce flight deck, and then sailors could run them out to the minesweepers in small boats.

As for the Sea Dragons, deploying with the Ponce or at least having it as a place to refuel could increase their time on station near a minefield.
Still, even the Navy acknowledges the Ponce is only a temporary experiment; even with a shipyard upgrade and a salty MSC crew, the ship can only serve for so long. The Navy wants two purpose-built afloat staging bases, based on its USNS Monfort Point-class mobile landing platforms. That isn’t certain, however – it is only authorized to build a class of three MLPs, and House appropriators in May did not fund the Navy’s request for advance procurement on an AFSB.
The biggest hurdle for making the Navy’s immediate vision a reality could be the condition of all the hardware involved. The Ponce is 42 years old and before its rebirth as a “staging base,” was infamous among sailors for its poor condition. The Avengers too are some of the Navy’s worst kept ships, as Chief of Naval Operations Adm. Jonathan Greenert acknowledged after his visit to Bahrain shortly after taking charge. As for the Navy’s Sea Dragons, they’re maintenance-intensive and among the most crash-prone aircraft in the fleet, with a rate of serious mishaps more than twice the average for Navy helicopters, according to a 2008 story in Navy Times.

For the mother ship centric mine countermeasures squadron to succeed, all the old hardware must not only work, it may need to work on a moment’s notice, in a crisis –- and may need to keep on working for weeks or even months at a stretch. The modern Navy’s mine-warfare capabilities have never been put to such a test, and unless they are, commanders may not know whether the mother ship-squadron concept truly works.