Mark Adomanis is an MA/MBA candidate at the University of Pennsylvania's Lauder Institute  previously wrote the Russia Hand blog at Forbes.

Russia plans to expand its military presence in the Arctic, officials said Monday. According to Nikolai Patrushev, the former head of the Federal Security Service of the Russian Federation (FSB) and the current head of the Security Council, Russia is going to create a number of “dual use” facilities in the Arctic, facilities that will be expected to host commercial craft as well as vessels of both the Northern Fleet and the FSB’s border service.1

Patrushev’s announcement is connected with the continued development of the or the “northern sea path,” basically an updated and modernized version of what was once known as the “northeast passage.” The rapid melting of the Arctic has opened up previously unreachable parts of Russia’s northern coast and has made what was once a near-impossible voyage far more practical. Traffic on the route, while still paltry compared with the traffic going through the Suez or Panama canals, has grown rapidly in recent years, and is forecast to increase as the Arctic stays ice-free for longer periods of time. Should warming continue, the northern sea path could very easily become one of the world’s busier maritime corridors. In comparison with the route through the Suez, it allows container traffic from Europe to Asia to reach its destination traveling about 4,000 fewer miles and roughly 13 fewer days.

END_OF_DOCUMENT_TOKEN_TO_BE_REPLACED 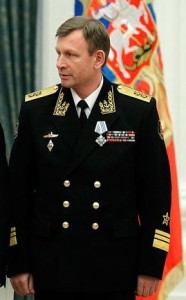 END_OF_DOCUMENT_TOKEN_TO_BE_REPLACED

In late June, Russians reportedly dispatched two large landing ships full of marines to their naval base in Tartus, Syria. However one of the ships at the center of the immediate media firestorm never left port and the other executed a normal training mission in the Black Sea before quietly returning to base a few days later. Russia is not above meddling in the internal affairs of other countries if it thinks it can get away with it, but escalating the Syrian conflict clearly was not in Russia’s national interest and was flatly contrary to all of its previous diplomatic activity.

Now less than a day after Russia allegedly decided to stop delivering arms to Syria until the situation calms down, media reports Tuesday said Russia is sending a flotilla of ships drawn from the Baltic, Northern, and Black Sea fleets to Syria. The move that would represent a dramatic change in tone from the past year, when continued arms sales to the Assad regime were considered sacrosanct, and while negotiations were being held in Moscow between the Russian government and members of the anti-Assad Syrian National Council.

View Russian Ships to Syria in a larger map

Russian sources indicate the following ships are part of the group that is heading towards Syria: the destroyer Admiral Chabanenko, the frigates Yaroslav Mudry and Smetlivy (“sharp” or “keen-witted”), and three large landing craft carrying a contingent of marines (the names of those ships have not been mentioned in any reporting to date). It is worth noting that the landing craft in question, while unidentified, are clearly not the landing craft from the Black Sea Fleet that were at the center of the controversy in late June, but three different ships, from the Northern Fleet.

The media reports on the Russian fleet heading toward Syria have all originated with an Interfax story that quoted an unnamed)“military-diplomatic source” with knowledge of the situation. On this particular issue Interfax doesn’t have the best track record as it was the original “source” for the non-story in late June. Smetlivy is based in the Black Sea and if it is heading to Syria it will have to pass through the Bosporus sometime in the next few days. Until then, given past history and the strangely convenient timing of the announcement it probably is wise to remain skeptical.

By American standards this task force is not particularly impressive. By the greatly diminished standards of Russian naval operations, however, this is a significant concentration of ships. Two, Admiral Chabanenko and the Yaroslav Mudry, are among the newest and most capable members of the Russian fleet, coming into service in 1999 and 2009 respectively. Smetlivy, on the other hand, is more than 40 years old.

The precise mission of this Russian flotilla is unclear — assuming the flotilla is heading for Syria and isn’t a crude invention of bureaucratic infighting. Most of the ships will take around three months to reach Syria because they’re leaving from Severomorsk in Russia’s far north and face an extremely lengthy and circuitous route. Mudry will also take several weeks to reach Syria as it is being dispatched from the Russian naval base in the Baltic. The official line from Interfax’s unidentified source is that it is all a training exercise that is not in any way connected with the ongoing violence in Syria: the ships in question need to practice all of the tasks associated ferrying marines a lengthy distance. Some defense experts on Russia have speculated that the landing craft are carrying valuable military cargo, perhaps refurbished MI-25 helicopters. Other experts have speculated that the landing ships aren’t carrying any cargo but will instead be used to evacuate Russian citizens and military personnel, or even embattled Syrian President Bashar al-Assad and his close associates.

While such speculation is interesting, considering how long it is going to take the landing ships to reach Syria it is unlikely that they’re on an urgent and time-sensitive mission. If the Russians were planning an evacuation by sea they would use ships from the Black Sea Fleet which can be in Syria in a matter of days, not ships that are many weeks of hard steaming away. Assuming that all of the ships in question are in fact heading to Syria, it is far more likely that the Russians are trying to show the flag and underline their continued interest in the country. Particularly after taking two steps, that are clearly anti-Assad in nature, meeting with the Syrian National Council and cutting off arms shipments Russia needs to avoid giving the impression that it is overly weak and conciliatory.

It is possible to say what this flotilla is not: a serious attempt to intervene on behalf of Bashar al-Assad and his swiftly destabilizing regime. None of the three warships heading toward Syria is a serious instrument of power projection: they are surface combatants with an anti-surface or anti-submarine focus. Even if these ships wanted to, they could not meaningfully impact the correlation of forces in Syria, anti-ship missiles being about the most useless weapon imaginable in urban guerilla warfare. The best guess is that the flotilla is yet another clumsy attempt to show the flag and highlight Russia’s continued importance in the region.