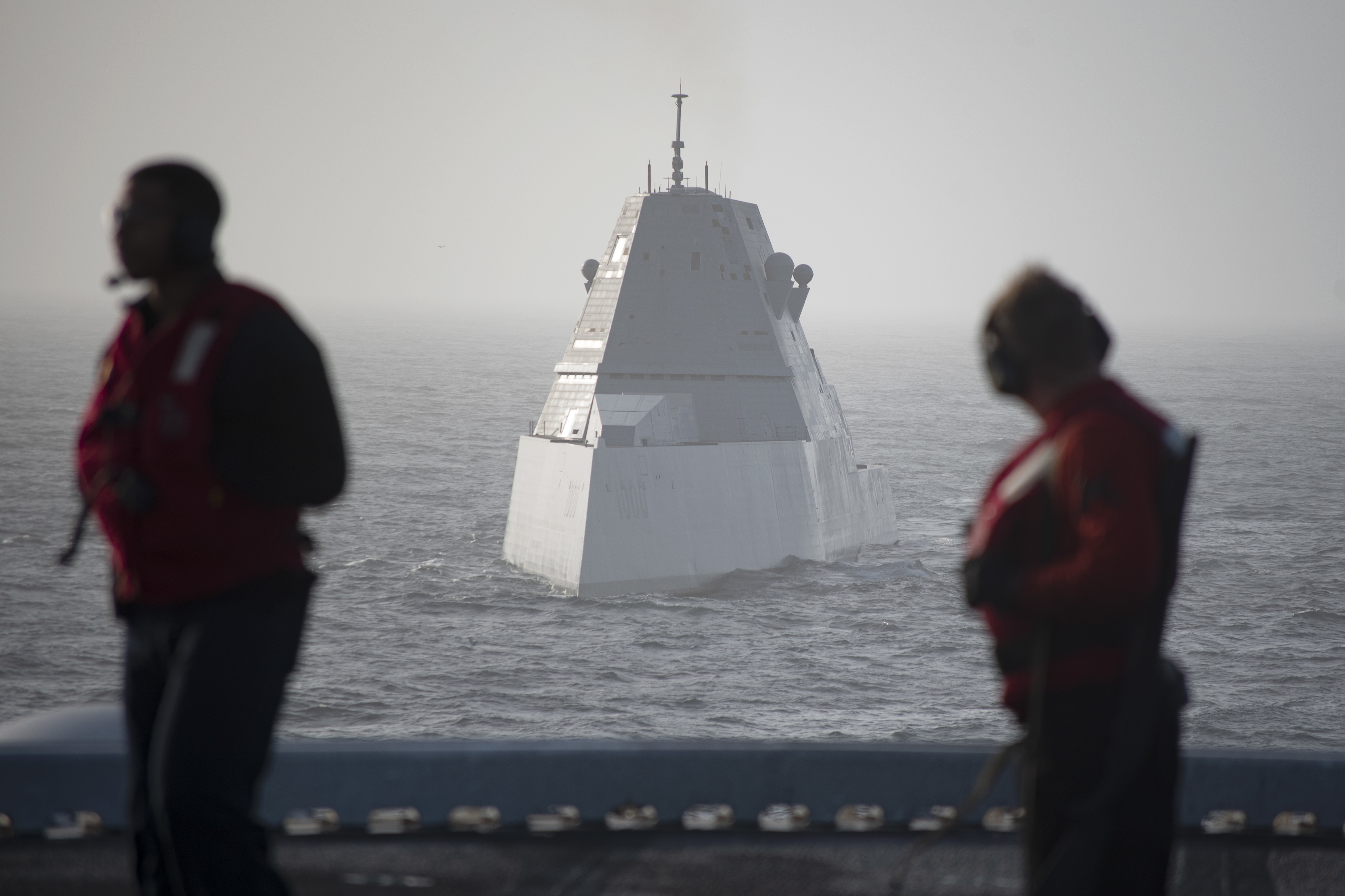 HII’s Ingalls Shipbuilding won a $10.5 million contract to plan for the modernization period of the first two Zumwalt-class guided-missile destroyers that will include the installation of hypersonic missiles on the two warships.

Ingalls will work until December to complete the planning portion of the modernization period for USS Zumwalt (DDG-1000) and USS Michael Monsoor (DDG-1001), according to a Friday announcement from the Pentagon.

Though not stated in the contract summary, the period will include the removal of the existing twin 155mm Advanced Gun System on each ship to install four 87-inch tubes for hypersonic missiles, USNI News has previously reported. The service has determined that installing the Common Hypersonic Glide Bodies (C-HGB) aboard the 16,000-ton destroyers is the fastest way to get a prompt global strike weapon to sea.

“We’re talking about deploying this system on DDG-1000 in 2025, that’s three years from now,” Vice Adm. Johnny Wolfe, the head of the Navy’s strategic systems programs, told reporters at the Naval Submarine League’s annual symposium in November. “We got to get on with getting all of the design for the Zumwalt, getting all of those tubes in there, as we pulled out the forward gun mounts. We’ve gotten to put these large diameter tubes in there, and then finish the integration work into the combat system.”

Three Common Hypersonic Glide Bodies (C-HGB) and their boosters could fit in each 87-inch tube – or 12 missiles per Zumwalt, USNI News understands.

The Navy plans to field hypersonic weapons on the first Virginia-class submarine, with the Virginia Payload Module due to deploy by 2029.

Zumwalt is set to arrive at Ingalls for the upgrade by the end of the year. It’s unclear if Zumwalt-class ship Lyndon B. Johnson (DDG-1002), currently at the Mississippi yard, will also get the tubes installed.

Over the last several years, Ingalls has invested $1 billion in expanding and modernizing its yard, the company noted in a statement.

The following is the complete Jan. 6, 2023, contract announcement.

Huntington Ingalls Inc., Pascagoula, Mississippi, is awarded a $10,516,400 cost-plus-fixed-fee contract (N00024-23-C-2324) for the DDG 1000 and DDG 1001 modernization period planning. Work will be performed in Pascagoula, Mississippi, and is expected to be completed by December 2023. Fiscal 2023 other procurement (Navy) funds in the amount of $9,744,650 (100%) will be obligated at time of award and will not expire at the end of the current fiscal year. This contract was not competitively procures in accordance with 10 U.S. Code 2304(c)(1) — only one responsible source and no other supplies or services will satisfy agency requirements. The Naval Sea Systems Command, Washington, D.C., is the contracting activity (N00024-23-C-2324).won a $10 million