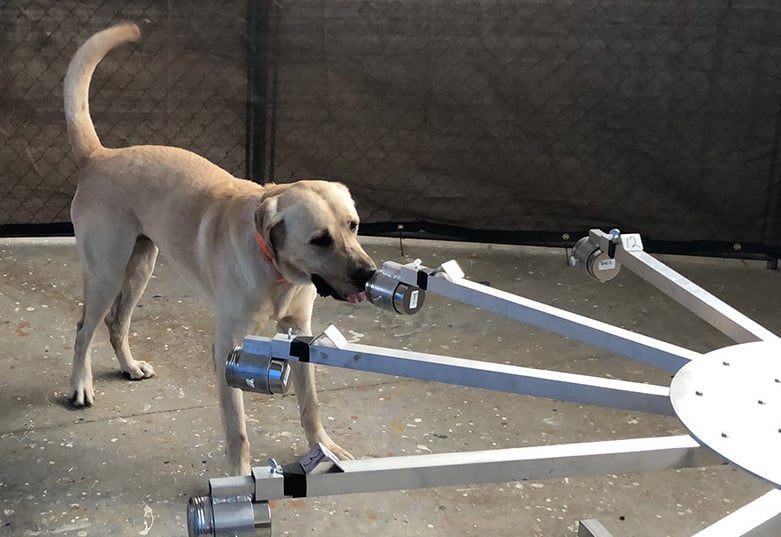 COVID-19 research in the military is going to the dogs. COVID-19 detecting dogs, to be specific.

Language from the text of the Fiscal Year 2023 National Defense Authorization Act, approved by the House on Thursday, calls for the continued funding of Army research that uses scent detection dogs to sniff out diseases like COVID-19 in their early stages.

While there is no provision for the funding in the version of the NDAA that went before the House and will go to the Senate, the summary of the compromise bill, released Tuesday night, urges the Department of Defense to fund the third phase of the research project.

“This research effort will soon complete Phase 2 and has shown promising results, including an accuracy rate of 89 percent in COVID-19 detection from samples,” according to the summary. “It is important that the Department of Defense fund Phase 3 of this research effort to determine whether the use of working dogs is a feasible method of responding to emerging disease threats in a low-cost, timely, and widely applicable manner.”

The first phase of the project, conducted by the Army Combat Capabilities Development Command Chemical Biological Center with the University of Pennsylvania, used samples of urine and saliva from people who were COVID-19 positive and negative, according to an Army news release. The second phase involved collecting shirts that a person wore overnight.

The second phase, involving the t-shirts, will test if the dogs were able to detect if a person has been infected by SARS-CoV-2, the virus that causes COVID-19, even if a person is asymptomatic.

As of phase one of the study, the dogs were able to detect a COVID-19 positive person days before a rapid test, according to the news release.

The idea behind the study is that dogs could be able to identify people who are positive for COVID-19 in a large military gathering, according to a news release from the University of Pennsylvania.

The study could also lead to more research into dogs’s abilities to detect other biological threats, Jenna Gadberry, a researcher at the Army Combat Capabilities Development Command Chemical Biological Center, said in the release.

”The way that we’ve been posing this capability to folks is not necessarily a COVID-19 detection capability; it’s a biological threat detection capability,” Gadberry said in the statement. ”We know that this isn’t going to be the last time we see some sort of a virus or pandemic, but we’re demonstrating the ability for dogs to be able to find a positive person or threat. We can take what we learn from the dogs to actually apply it to some of our handheld detectors or laboratory detection systems. They’re able to detect far different elements at this point in time than our laboratory equipment can.”

Dogs have been used to sniff out COVID-19 in other non-military situations as well. Florida International University has been testing dogs to see if they can detect COVID-19, with dogs going to elementary schools to sniff the kids for the disease, according to an NPR article.

The Miami Heat and NASCAR have also used COVID-19 detection dogs, according to the University of Pennsylvania release.

The military’s COVID-19 research extends beyond detection dogs, with various units across the branches getting involved since the beginning of the pandemic.

One such unit was the Naval Medical Research Center, which conducted a study looking at Marine Corps recruits during the pandemic. The study, conducted by Naval Medical Research Center with Icahn School of Medicine at Mount Sinai and Princeton University, found that men and women had different immune responses to COVID-19, with women having worse symptoms but less viral load.

Women tested in the study had a higher innate immune system activation, Stuart Sealfon, the lead author on the study paper, told USNI News. That early immune response is what causes symptoms when a person gets infected, he said.

“So, the women are mounting a somewhat more vigorous response, which is associated with having more symptoms but less virus,” Sealfon said.

So while women might feel more ill because they have worse symptoms, like a higher fever, their outcome, on average, tended to be better than that of men.

The study captured a baseline level of a protein called interferon, which helps the body attack a pathogen, in the recruits prior to any COVID-19 infection, said Cmdr. Andrew Letizia, science director at Naval Medical Research Unit-2.

The women had higher levels, which helped with their better immune responses, and allowed them to recover quicker, Letizia said.

The study population was overwhelmingly male, given that there are more male recruits than female, but there were still about 200 women in the study, which gave the researchers a large enough sample population.

What made the Navy study stand out is that it was able to follow a population from March to November 2020, Letizia said. During that time frame, the Marine recruits got sick and recovered from COVID-19, allowing the researchers to study their immune responses, while also having a baseline from before they fell ill.

While it was a short amount of time, there were numerous infections, allowing the researchers to collect ample data, Sealfon said.

“It’s a quirk of the pandemic that we were able to have this view of a large number of people before they were affected, during the infection and after infection,” he said. “We have blood samples [to] be able to look at the molecular measurements, that’s not something that would ever happen again.”

The Marine Corps could not shut down during the pandemic, and they still needed to bring in new recruits, Letizia said. That made it possible to do the study, especially since other parts of the country were on lockdown.

The service needed to understand how the virus spreads among a congregate population with a lot of interaction as well as how quickly a person could return to training safely following infection, he said. The study’s goal was to answer some of the fundamental questions and inform mitigation strategies.

Studying the Marine recruits had its pros and cons. While they were able to get the data, the group was healthy 18 to 21-year-olds who were in good physical health, Sealfon said. That means the results of the study cannot be extrapolated to the general public without more research.

The immunological response is just one analysis to come out of the study, Letizia said. The study has produced 10 peer-reviewed papers so far. Another planned analysis is looking at long COVID in the recruits that were infected, he said.