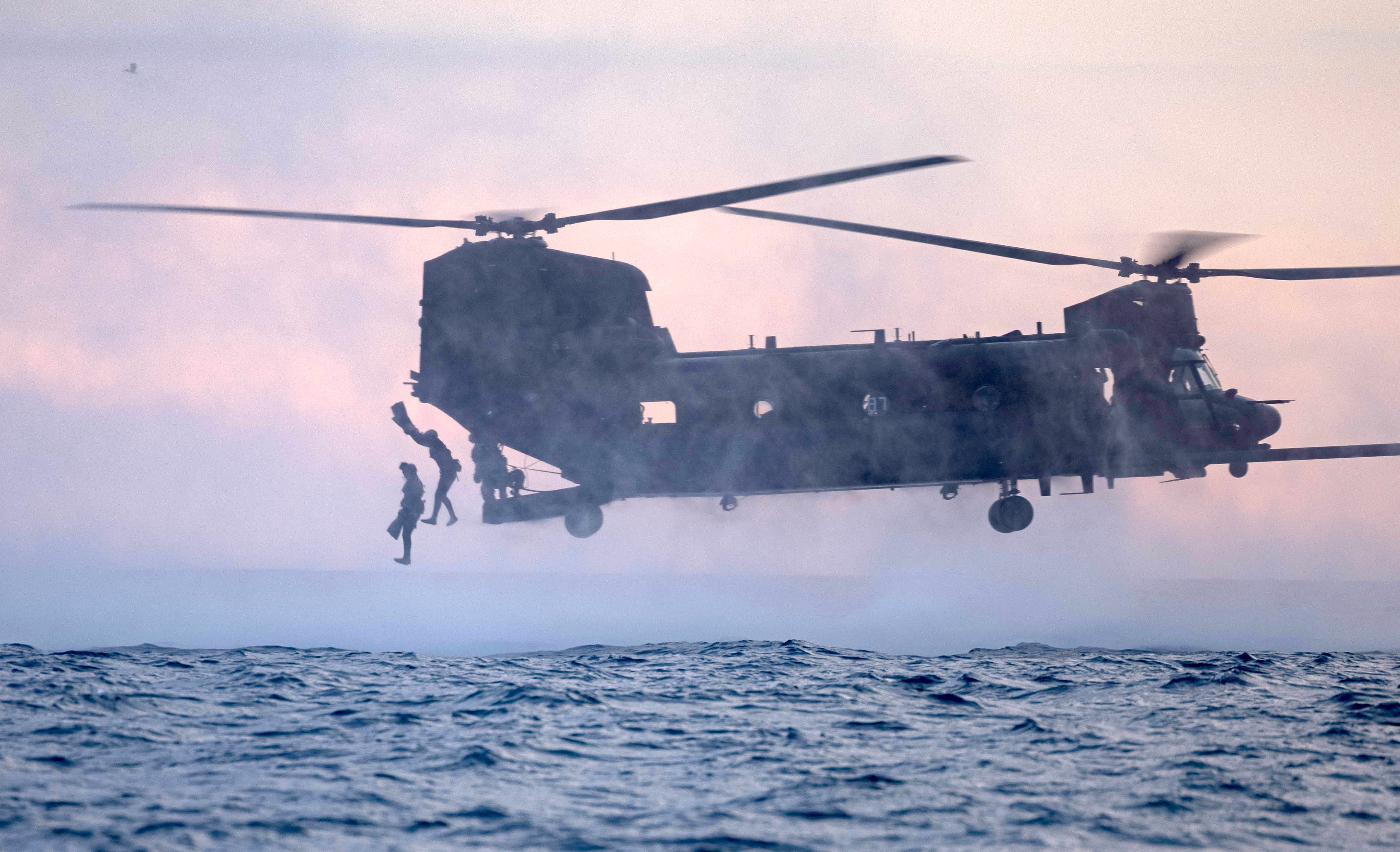 CAMP PENDLETON, Calif. – A pair of helicopter gunships swept over a scrubby valley and waited overhead as the first two MV-22B Osprey tiltrotors landed on the dusty landing zone. The rear-mounted machine guns provided cover as Marines raced into the nearby brush. Far to the south, another force of Marines went ashore via landing craft from San Diego, Calif.-based dock landing ship USS Harpers Ferry (LSD-49).

The assault forces likely won’t meet in this simulated battle, and that’s by intent. The sprawling, coastal Camp Pendleton Marine Corps Base, along with nine other installations and offshore ranges across a region covering 60,000 square miles, are providing a patchwork of “islands” that form the key battlespace during exercise Steel Knight 2023. The area between Camp Pendleton and San Clemente Island is serving as the key strait or strategic waterway the naval forces are tasked defend.

Nearly 10,000 Marines and sailors are participating in this year’s annual exercise in a scenario that includes additional virtual forces and that draws from the Marine Corps’ Force Design 2030 vision and joint maritime strategy to prepare forces for likely battles, including in vast maritime Indo-Pacific region. The “islands” in the scenario represent the maritime, littoral environment that military officials believe will be the next major battlefield in the future – if potential threats from China, Russia or North Korea turn real. 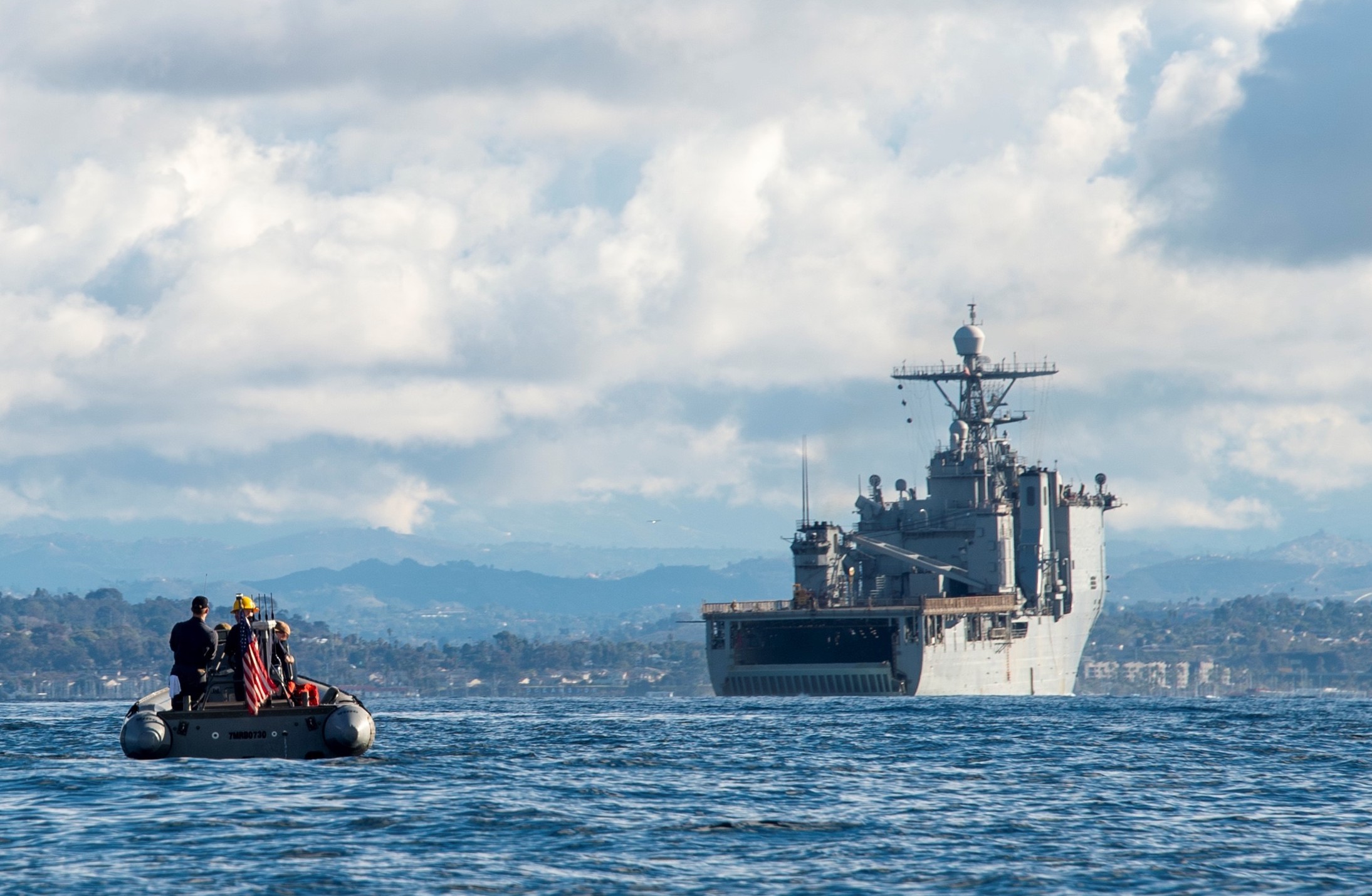 “The naval force… is going to be central to America’s ability to fight and win in that future conflict,” Watson said. “Training together as a Navy and Marine Corps – integrating staffs, making sure that our concepts and our warfighting capabilities are interoperable and able to contribute together to maximum effectiveness in that future maritime naval fight is really important, and that’s what we’re focused on here.”

“This is putting together some parts that don’t always work together and training them for a specific purpose – to be ready to go forward, contribute to deterrence on behalf of the nation,” he added. “But if deterrence fails, fundamentally, we’re the folks that need to be prepared to fight and win against a peer-level adversary in a future war fight anywhere on the globe. In this case, we’re focused on the Western Pacific.”

For the exercise, the division moved most of its combat forces with 1st Marine Regiment over 300 miles to Fort Hunter-Liggett, using the training post along California’s central coast as the main operating base. “From there, they are projecting capabilities” from the shore and by helicopters and tiltrotors, Watson said, to the “forward bases to secure key maritime terrain to emplace strike capabilities and sensor capabilities to control key terrain afloat.” 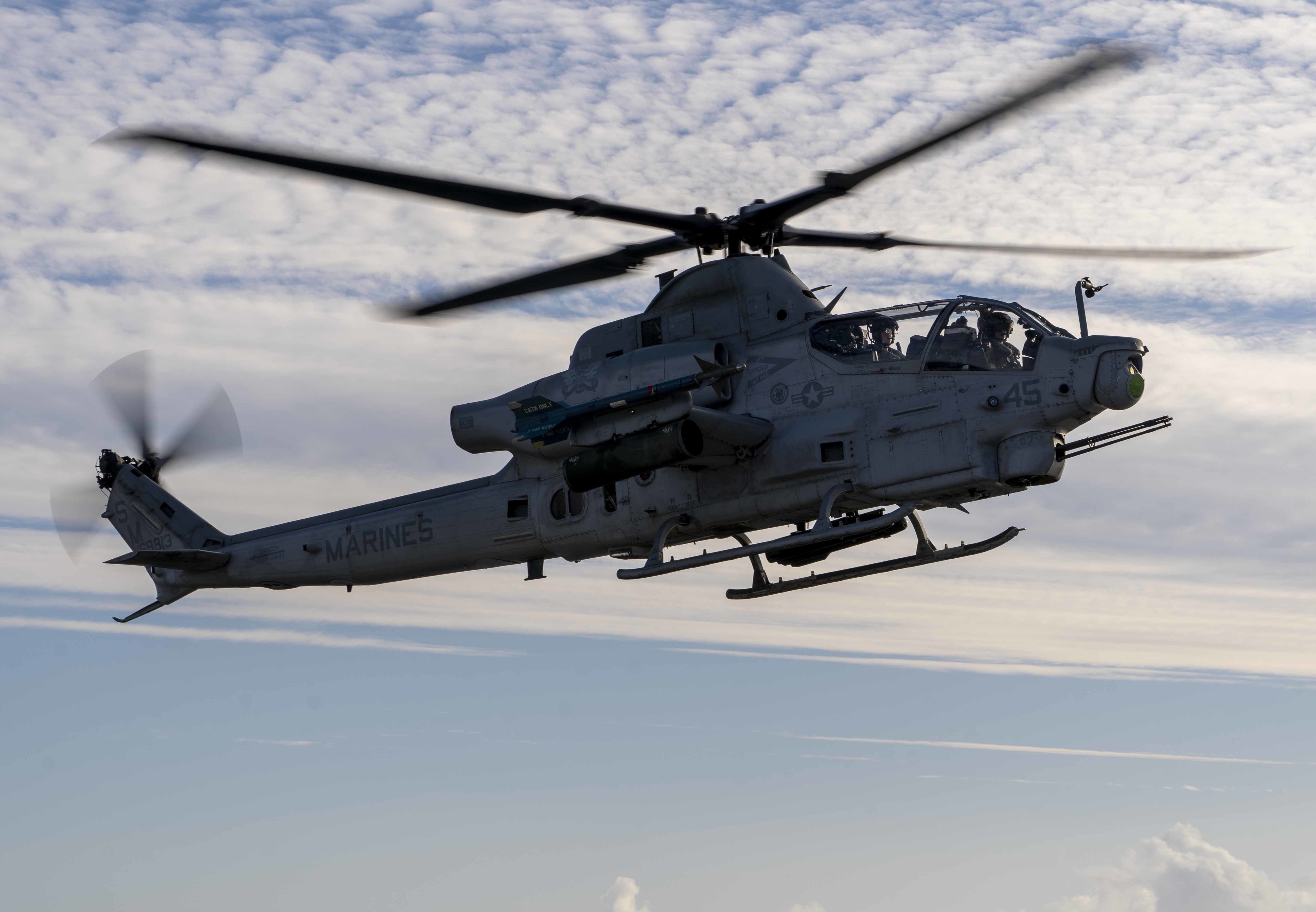 The exercise, Watson said, is providing another venue for Marines to train with NMESIS, the Navy-Marine Expeditionary Ship Interdiction System, “a very capable” anti-ship, naval strike missile that Marines can land ashore and easily move as needed to help defend ships at sea or key waterways.

This year’s exercise also is the final mission rehearsal, done along with Expeditionary Strike Group 3 and I Marine Expeditionary Force, for the Marine air-ground task force deploying in several months as Marine Rotational Force-Darwin for the annual 2023 rotation to Australia.

The SK23 focus on naval integration has the command staffs with 1st Marine Regiment and Amphibious Squadron 5 integrated both at Battle Simulation Center at Camp Pendleton and at sea, officials said. Units in the upcoming Darwin rotation and training at SK23 include 3rd Battalion, 1st Marines and Combat Logistics Battalion 1, both based at Camp Pendleton. 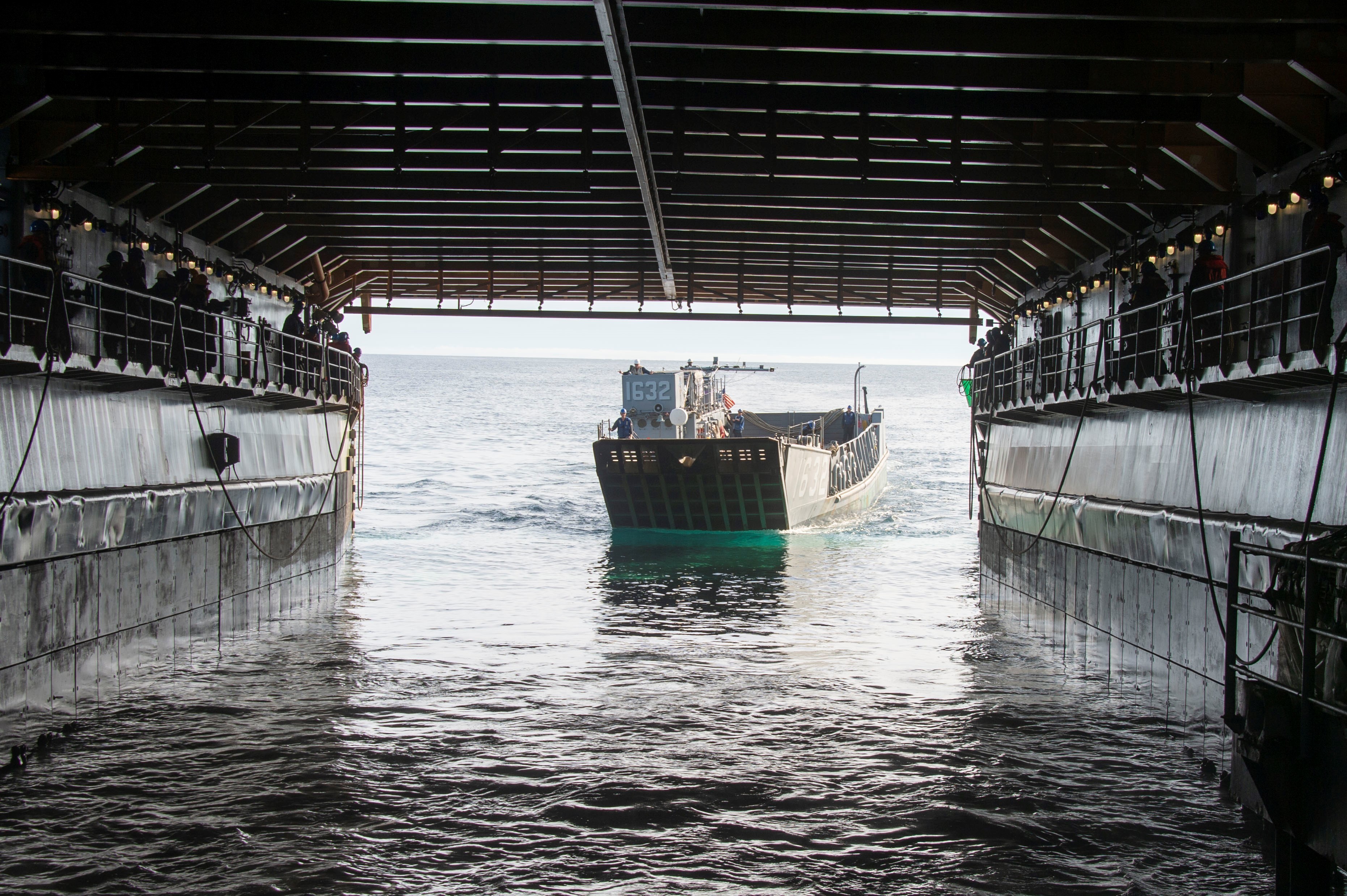 Steel Knight, which began in 1991, long has served as a key event to exercise 1st Marine Division’s command and control among its various subordinate units, providing realistic training – including live-fire events – for its West Coast-based ground combat units. But just in the last year or two, it’s become more of an integrated naval exercise, with more ships and sailors involved.

“In the past, we’ve trained for a large part for the Navy to deliver Marines to a point where they put them ashore to accomplish objectives on the land,” Watson said, “and what we’ve really evolved to now is the Navy and Marine Corps working together to project power from the sea to the shore, but also for the Marines to be able to contribute to things like sea denial. How do we, with capabilities based ashore, to the protection, control or defense of key maritime terrain, like straits and waterways, things like that. How do we project combat power from shore out onto the water.”

The SK23 focus on naval integration has the command staffs with 1st Marine Regiment and Amphibious Squadron 5 integrated both at Battle Simulation Center at Camp Pendleton and at sea, officials said. 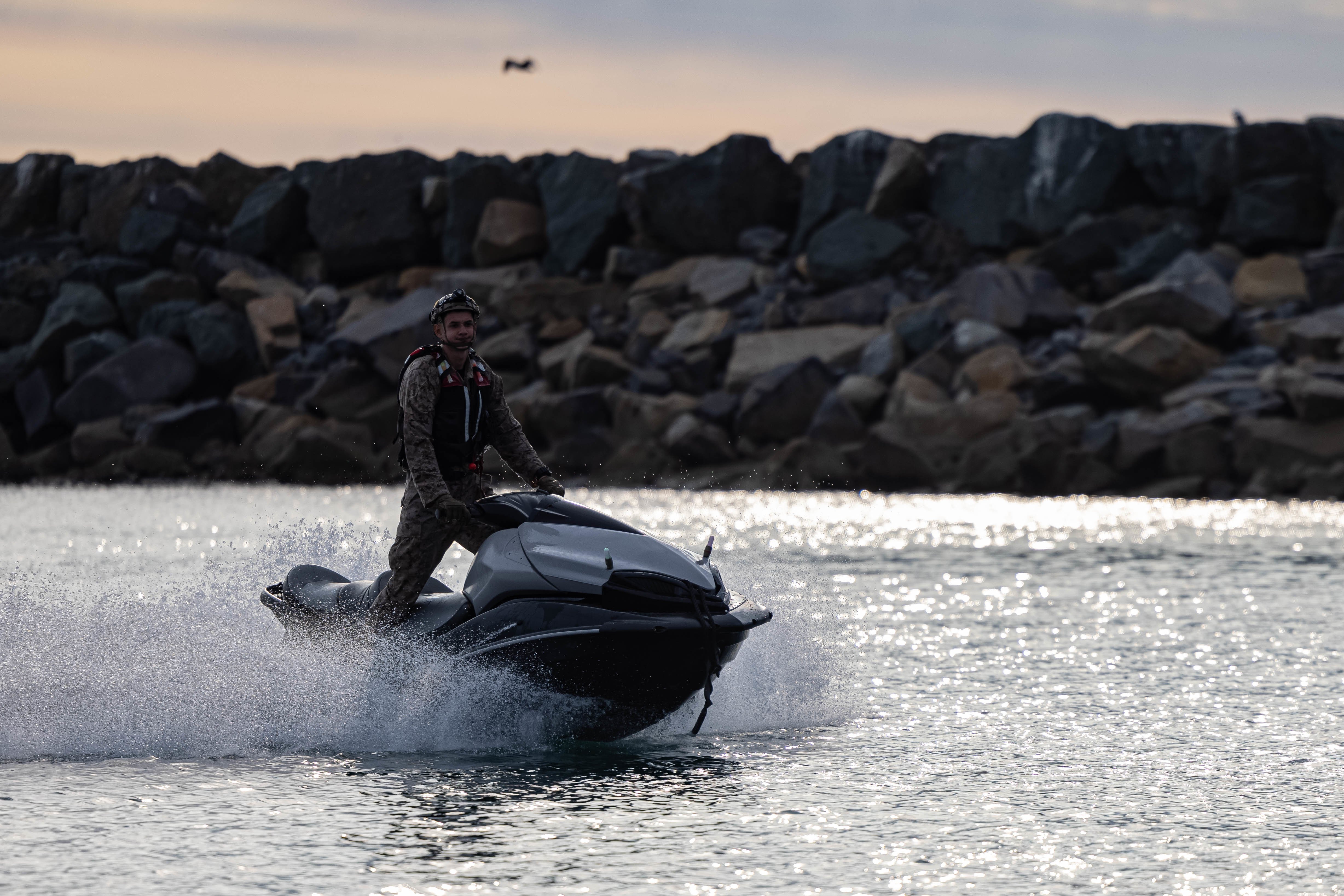 Both services are “continuing to refine the way we plan together, we cooperate and coordinate together, especially with command and control, not only of ships but of Marines ashore,” said Ellinger, now ESG-3’s exercise control lead for SK23. That includes working on integrated naval fires, at land, at sea and in the air and on sea denial operations.

Some newer technologies are at play this year. Joining the ships at sea is Sea Hunter, which is equipped with newer technologies. It’s involved in maritime control and helping to provide the “common operating picture” during SK23, Ellinger said. Jackson is equipped with a weapons package for the Navy Sea Sparrow Mission and has an MQ-8C Fire Scout unmanned aerial vehicle along with its with an embarked helicopter for help maritime surveillance and sea denial operations, she added.

Ellinger said the Steel Knight exercise “is an extension of 3rd Fleet and I MEF’s endeavors to continue to strengthen not only our amphibious forces but also our expeditionary combat forces. So we continue to refine and enhance the capability to interoperate.”

“We have a lot of innovation that’s being developed,” she said, “and Steel Knight is the perfect exercise for the Navy-Marine team to put into fleet experimentation new USVs along with NMESIS and other missile and communication systems that enhance cooperation and innovation.”

Air and Logistics Exercised Too 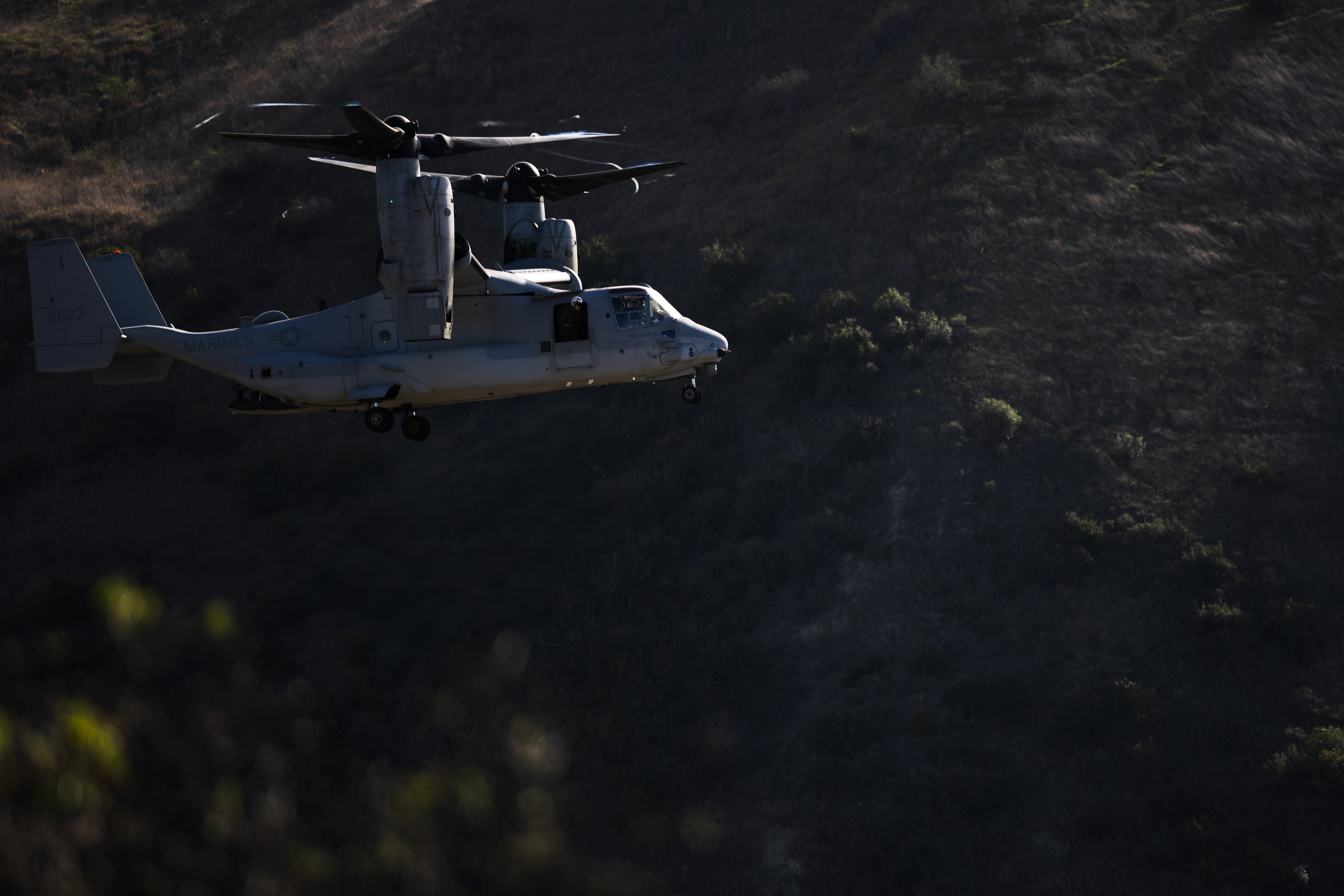 Capt. Joseph DiPietro, a former tank officer who participated in SK22, said that it was important learning “how to work across the MAGTF and to work with our Navy partners, that way we were prepared for anything that might come up in the Indo-Pacific theater.”

Logistics was one of the top challenges DiPietro said he and his Marines faced.

“We treated the local bases as islands so you have to move things differently than if you’re just driving on roads,” said DiPietro, a communication strategy officer with 1st Marine Division. “You have to get everything either on a ship or in the air.”

They took what they practiced at SK22 once they were in Australia and, more than once, had to figure out how to move equipment across islands in the South Pacific.

“In the future operating environments that we’ll be in, you have to be creative and utilize everything, from naval shipping to civilian barges. We used a seaplane one time in Australia,” he said.

Pilots and air crews at Steel Knight are getting the chance to sharpen skills in assault force, escort, strike and armed reconnaissance missions, often working very closely with their Navy counterparts, according to exercise participants.

Capt. Tommy Gavin, a UH-1Y Huey pilot with Marine Light Attack Helicopter Squadron 169, said the squadron has integrated with Navy H-60s for missions including sea denial. “The 60s will kind of coordinate our reconnaissance flights,” including in scenarios where they’re tasked to defend a ship, said Gavin, whose squadron is based at Camp Pendleton. The Hueys are equipped with the advanced precision kill weapons system, or APKWS, rockets that can be used against targets including small enemy boats. 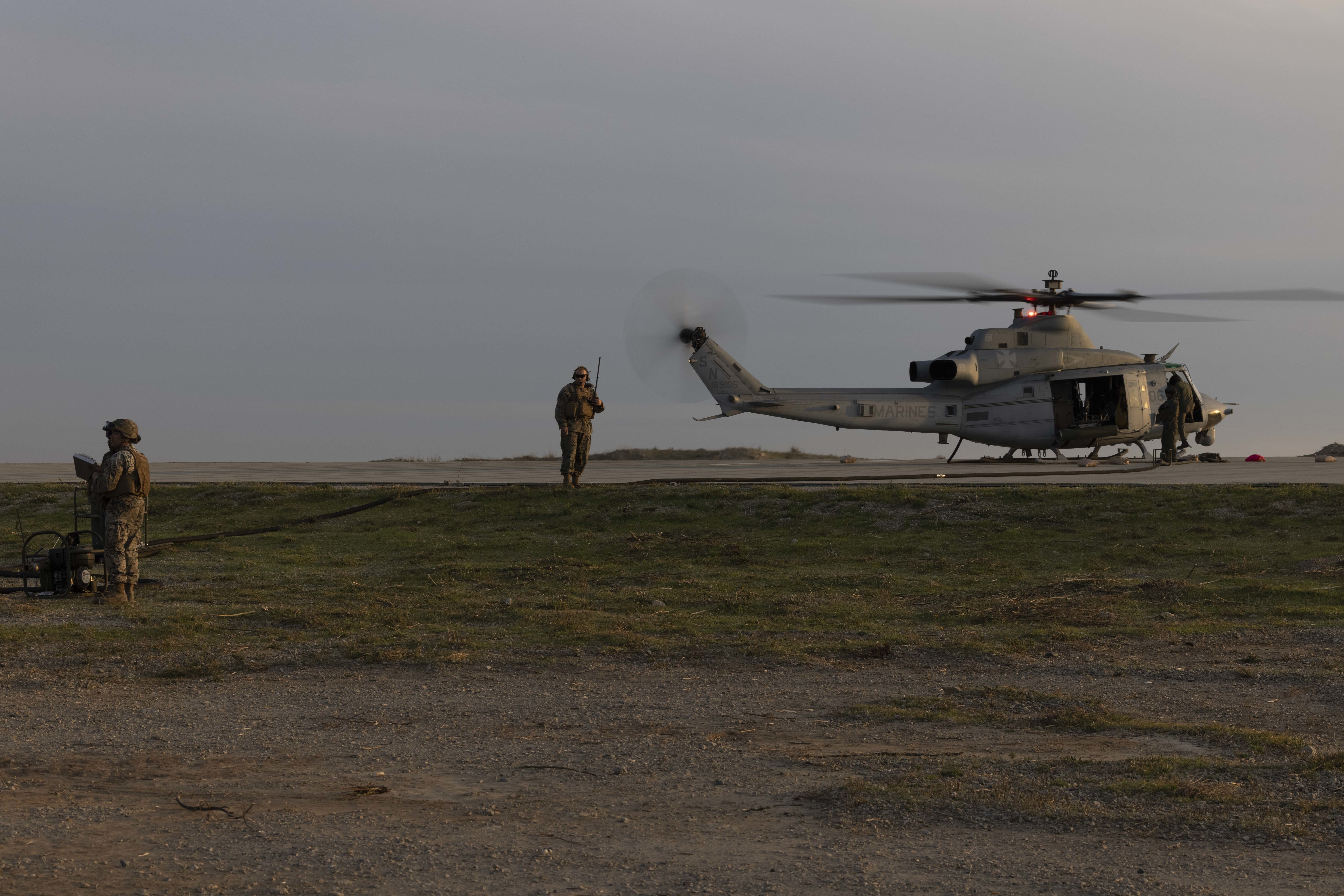 Those might be used as the squadron gears up for likely missions in and around San Clemente Island and the Navy’s adjacent, live-fire sea ranges. “Especially in exercises like this, they push us out to San Clemente Island. It’s great training out there with the ranges” and boats with pulled targets, he said, adding, “That’s really good training, integrated with the Navy there.”

The weather injected a bit of last-minute changes as plans for training missions from Hunter-Liggett got moved south when wet, wintry weather moved across northern California. The exercise is also giving Osprey pilots the chance to work and coordinate with the escorting “skids” of AH-1Z Cobra and UH-1Y Huey helicopters – one of each reconnoitered the zone and provided cover for the air assault into the LZ on Monday – that provide extra situational awareness for the transport flights.

“Approaching an objective area, we reach out to them via radio,” said Capt. Kyle Davinsizer, an Osprey pilot with Marine Medium Tiltrotor Squadron 164, based at Camp Pendleton. “They’re eyes overhead, letting us know whether or not it’s safe to land or stop where you’re at and let us sanitize the zone. They’re making sure it’s safe for us to land.”

That coordination and integration will be critical in maritime environments where naval forces are operating far away from higher headquarters “as if you you don’t have guidance,” Gavin said. In such scenarios like depicted in Force Design 2030, small units are expected to plan, act and react independently within the larger commander’s guidance and standard operating procedures.

They also practice scenarios like losing communication so they “have to develop contingency plans for all the scenarios,” Davinsizer said. “You still practice as if you don’t have communication.”

“We should know how to work together,” added Gavin, “and practicing here just improves those tactics.”