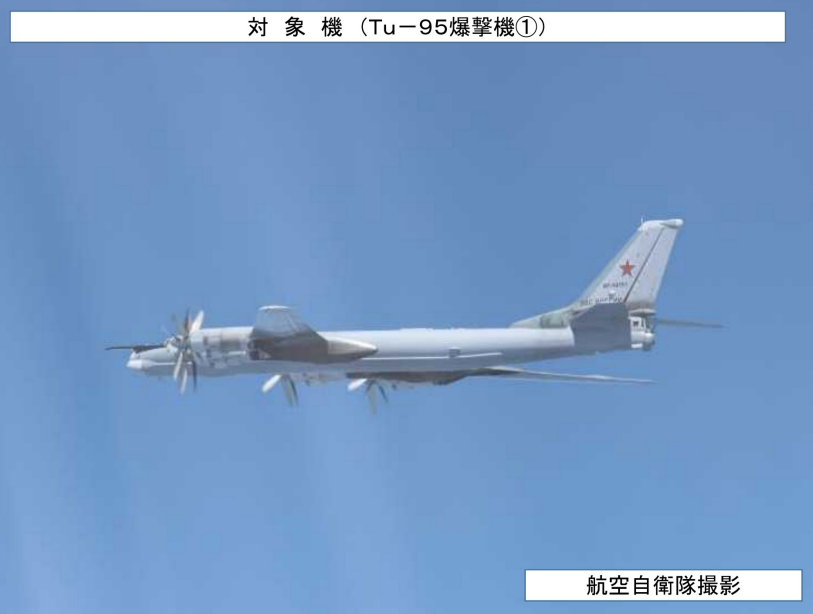 A Russian Tupolev Tu-95 Bear off Japan in May. Japanese MoD Photo

The joint patrol was the most recent one since May this year, which occurred the same day U.S. President Joe Biden met his Australian, Indian and Japanese counterparts in Tokyo, though both the Russian and Chinese defense ministries stated the flights in May were part of their annual military cooperation plan and not intended to be provocative.

On Wednesday morning, two Chinese H-6 bombers were confirmed to have flown from the East China Sea through the Tsushima Strait into the Sea of Japan before heading north, according to the Japanese MoD. Around the same time, two Russian aircraft flew south before turning back and heading north. Japan Air Self-Defense Force (JASDF) fighter aircraft scrambled in response, according to a statement from the MoD. 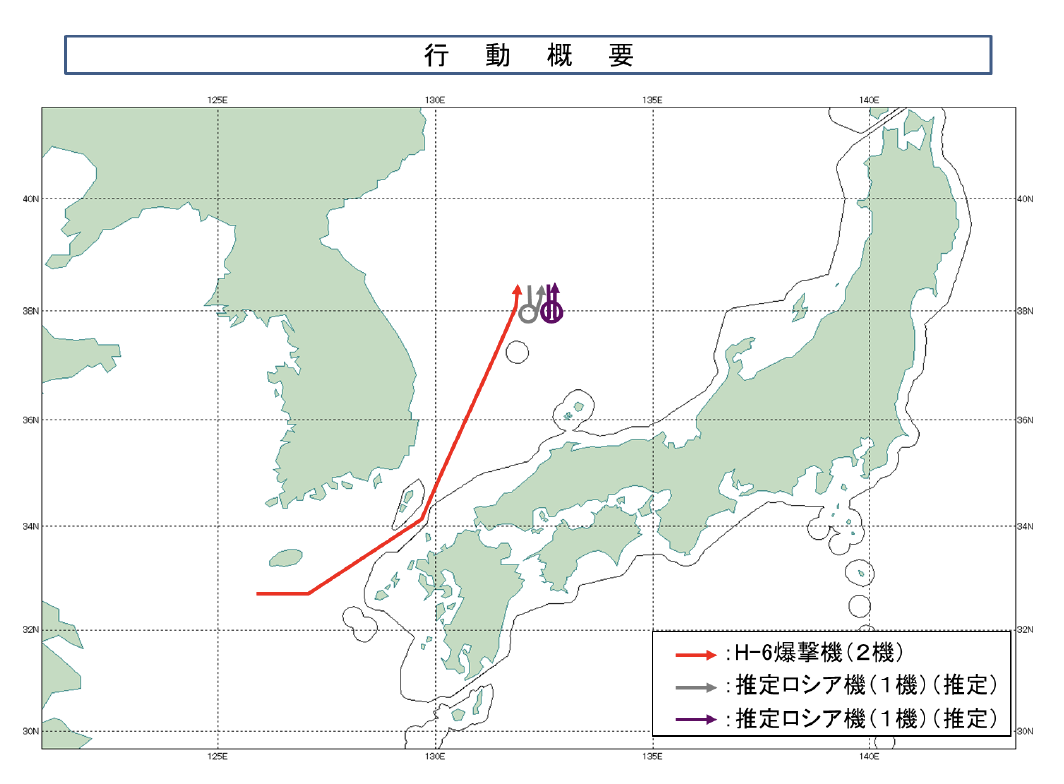 According to Korea’s Yonhap News Agency, the Republic of Korea’s (ROK) Joint Chiefs of Staff (JCS) said Wednesday a total of two Chinese H-6 bombers, four Russian Tu-95 bombers and two Russian Su-35 fighters entered the Korea Air Defence Identification Zone that day with the Chinese bombers entering twice on their own and once with the Russian aircraft. The JCS stated that Republic of Korea Air Force fighters scrambled in response, but the Russian and Chinese planes did not violate ROK airspace.

The JCS said that the two Chinese H-6 bombers entered the Korean ADIZ at 5:48 a.m. local time, in an area 78 miles north of Leo Islet, a submerged rock south of Jeju Island, and left at 6:13 a.m. Following this, the H-6s entered the ADIZ from an area northeast of the port city of Pohang at 6:44 a.m. before exiting at 7:07 a.m. The two Chinese bombers and the four Russian bombers and two Russian fighters then flew together into the ADIZ from an area 125 miles northeast of the ROK’s Ulleung Island at 12:18 p.m. before exiting at 12:36 p.m. Both Russia and China do not recognise the Korea ADIZ.

Russia’s Defense Ministry said in a Wednesday release that the air forces of Russi and China conducted a joint air patrol in the Asia-Pacific region, adding that an air group of Russian Tu-95MS bombers and Chinese H-6 bombers carried out air patrols over the waters of the Sea of Japan and East China Sea.

The Russian bombers were in the air for eight hours, and the combined air group was escorted by Russian Su-30SM and Su-35S fighters, according to the release. Foreign fighter aircraft flew escort on the air group on occasions on the flight route, although the MoD did not state which countries these fighters came from. The release also stated that for the first time in the course of joint air patrols, Russian aircraft landed at an airfield in the People’s Republic of China and Chinese aircraft at an airfield in the Russian Federation though it did not give the locations where this took place.

The Russian MoD also said the aircraft of both countries acted in full accordance with the provisions of international law and there were no violations of the airspace of third countries, according to the release. Upon completion of the joint air patrol, the aircraft involved returned to their home bases. The patrols were carried out as part of the military cooperation plan for this year and are not directed against third countries. 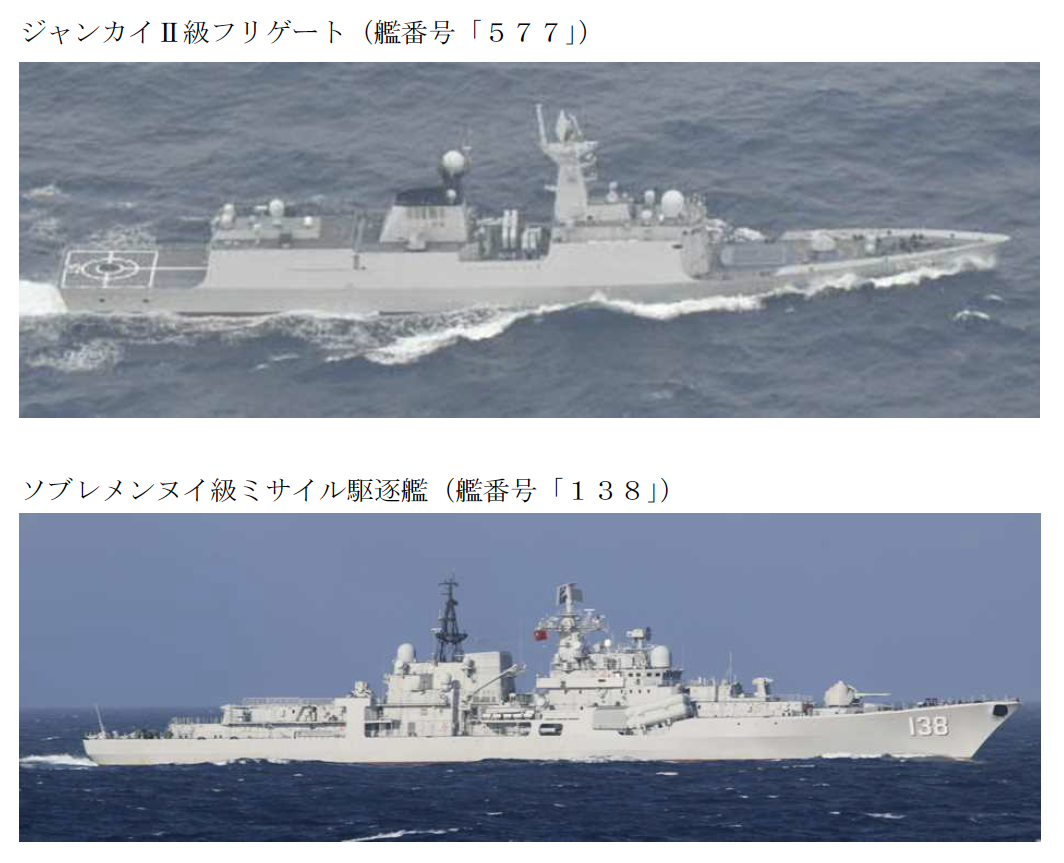 China’s Ministry of National Defense issued a brief statement on Wednesday about the joint operation.

“According to the annual military cooperation plan between the Chinese and Russian militaries, on November 30, the air forces of the two countries organized a routine joint air strategic patrol over the Sea of ​​Japan, the East China Sea, and the western Pacific Ocean,” according to the statement.

Chinese ships have also sailed through the Tsushima Strait as well this week.

At 5 p.m. Monday, a People’s Liberation Army Navy frigate was sighted sailing northeast in an area 93 miles southwest of Tsushima with the image and hull number identifying the frigate as CNS Huanggang (577), according to a Tuesday JSO release.

A PLAN destroyer was sighted 9 a.m. Tuesday sailing northeast in an area 20km southeast of Tsushima. Image and hull number provided in the release identified the destroyer as CNS Taizhou (138).

Both Taizhou and Huanggang then sailed northeast through the Tsushima Strait into the Sea of Japan. The Japan Maritime Self Defense Force destroyer JS Setogiri (DD-156) and JMSDF P-1 Maritime Patrol Aircraft of Fleet Air Wing 4 based at Naval Air Facility Atsugi, Honshu shadowed the PLAN ships, according to the release.