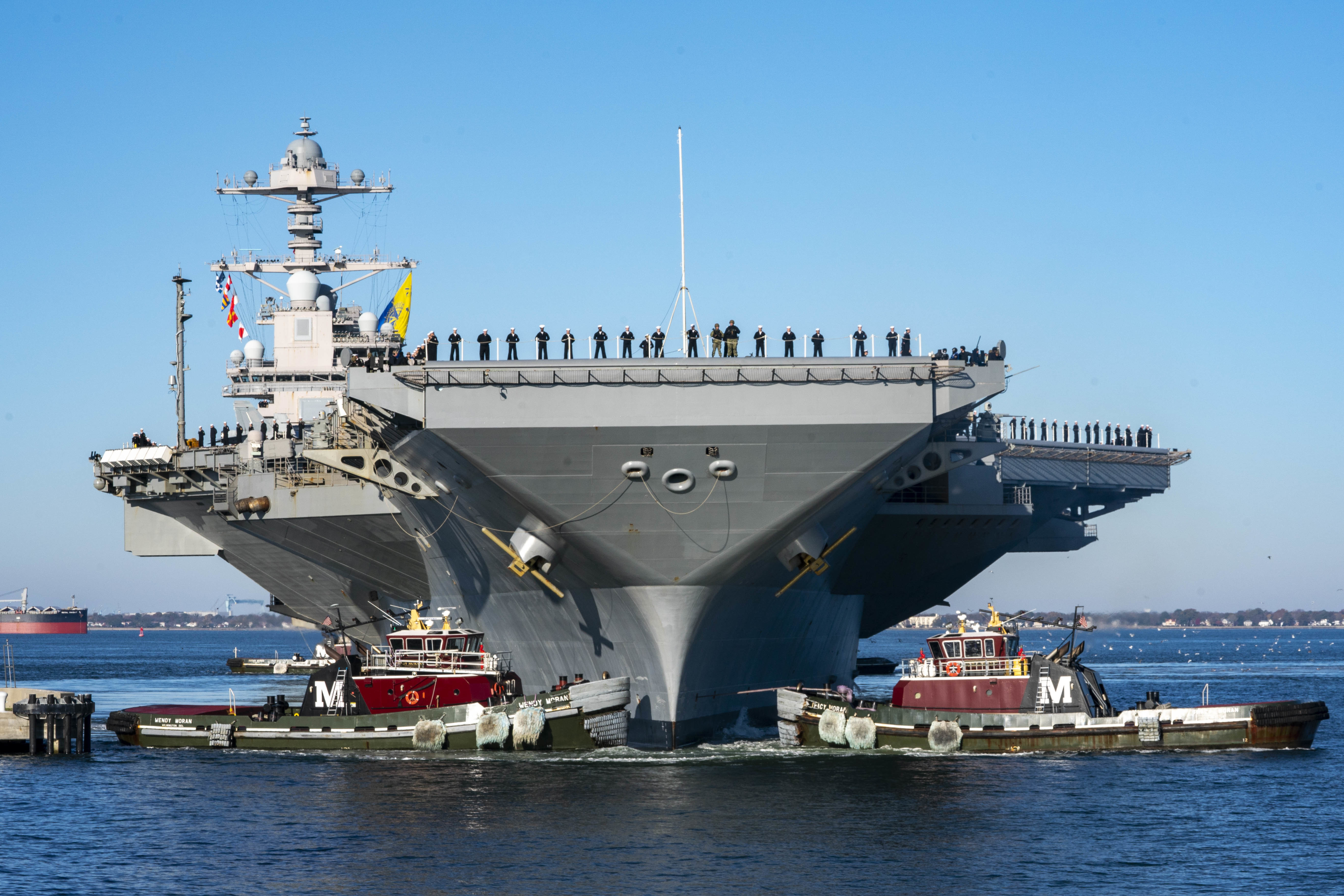 This post has been updated to indicate neither forces from Finland nor Coast Guard cutter USCGC Hamilton participated in the exercise with USS Gerald R. Ford.

Ford arrived in Norfolk after returning from a port visit to the U.K., last week and exercises with allied nations throughout the North Atlantic.

“The flagship set sail from Norfolk, Virginia, Oct. 4, and traveled more than 9,275 nautical miles,” reads a statement from U.S. 2nd Fleet.
“During the scheduled deployment, Ford operated with eight allies and partners, Canada, Denmark, Spain, France, Germany, the Netherlands and Sweden, to strengthen interoperability, while conducting a range of maritime operations and exercises.”

Major events for the strike group included port visits to Halifax, Canada, on Oct. 28 and Portsmouth, U.K., on Nov. 14. Ford and its escorts also participated in the extensive Silent Wolverine exercise with ships from Canada, Denmark, Germany, Spain, France and the Netherlands.

“Through integrated and combined operations such as live and inert ordnance expenditure by Carrier Air Wing 8, anti-submarine warfare, anti-surface warfare, and air defense, we set the stage for operating with Ford-class technologies in a deployed environment,” said Ford commander Capt. Paul Lanzilotta in the Saturday release.
”We completed more than 1,250 sorties, expended 78.3 tons of ordnance, and completed 13 underway replenishments.”

Ford took aboard a partial air wing composed of every type of aircraft used on an aircraft carrier. At any given point during the deployment, the carrier had up to 60 aircraft embarked — about 80 percent of a full air wing. Ford also took on more than 1,200 tons of ammunition as part of the underway.

The time at sea was an opportunity to prove systems that were introduced on Ford designed to increase the sortie generation rate of the aircraft carrier. The carrier features the Electromagnetic Aircraft Launch System (EMALS) and Advanced Arresting Gear (AAG) are both new systems with software elements that have required extensive testing over the last few years. Also, the Advanced Weapons Elevators (AWE), which has delayed Ford’s ability to deploy are fully operational and were tested extensively.

Now back in Norfolk, Ford and its crew will now prepare for a longer deployment planned for next year, defense officials have told USNI News.

“This deployment laid a strong foundation for the strike group, created momentum to carry us forward for future operations, and has prepared us to answer our nation’s call when needed,”
said Carrier Strike Group 12 commander Rear Adm. Greg Huffman said in the Saturday statement.