The Shupang-class survey ship was sighted sailing northeast through Japan’s contiguous zone west of Gaja Island and entered Japan’s territorial waters southwest of Kuchinoerabu Island at 12:10 a.m. local time on Wednesday. The ship departed Japan’s territorial waters after three hours of operating near Yakushima Island and sailed southeast. According to Japanese officials, the transit was the fourth intrusion of a foreign warship this year, marking a record high.

On Monday, the Japanese MoD issued a statement that said on Oct. 28, a Russian Navy Balzam-class surveillance ship was sighted sailing west in an area 160 kilometers west of Cape Ryupi, Aomori Prefecture, Honshu. An image and hull number provided in the release identified the ship as Pribaltica (80), which is part of the Russian Navy Pacific Fleet. The following day, the Russian ship was sighted sailing southeast towards the Tsugaru Strait before turning around in an area 80 kilometers west of Cape Ryupi and subsequently sailing northwest into the Sea of Japan. Minesweeper JS Izushima (MSC-687) and a JMSDF P-3C Orion MPA of Fleet Air Wing 2 based at JMSDF Hachinohe Air Base, Honshu monitored the Russian ship, according to the release.

Meanwhile, a number of naval vessels are docked in Yokosuka for the JMSDF International Fleet Review (IFR), which will happen on Sunday at Sagami Bay. Australia, Brunei, Canada, India, Indonesia, Malaysia, New Zealand, Pakistan, Singapore, Thailand, the United Kingdom and the United States will take part in the IFR. Details on the U.S. participation have not yet been disclosed, but the following list of ships are currently docked at Yokosuka, according to ship spotters:

U.K. patrol vessel HMS Tamar (P233) is also taking part in the fleet review. Submarine Farncomb was originally scheduled to take part in the Rim of the Pacific exercise in Hawaii over the summer, but maintenance issues caused the submarine to miss the exercise, according to Australian media reports. The submarine did deploy to Hawaii at the end of RIMPAC and conducted bilateral training there before heading to Japan.

Several ships have wrapped up deployments to the Indo-Pacific recently. USCGC Midgett (WMSL-757) arrived home on Monday in Honolulu following an 83-day, 16,000 nautical-mile deployment to the Western Pacific, which began in August. The national security cutter operated under the tactical control of U.S. Navy 7th Fleet, according to a Coast Guard news release. 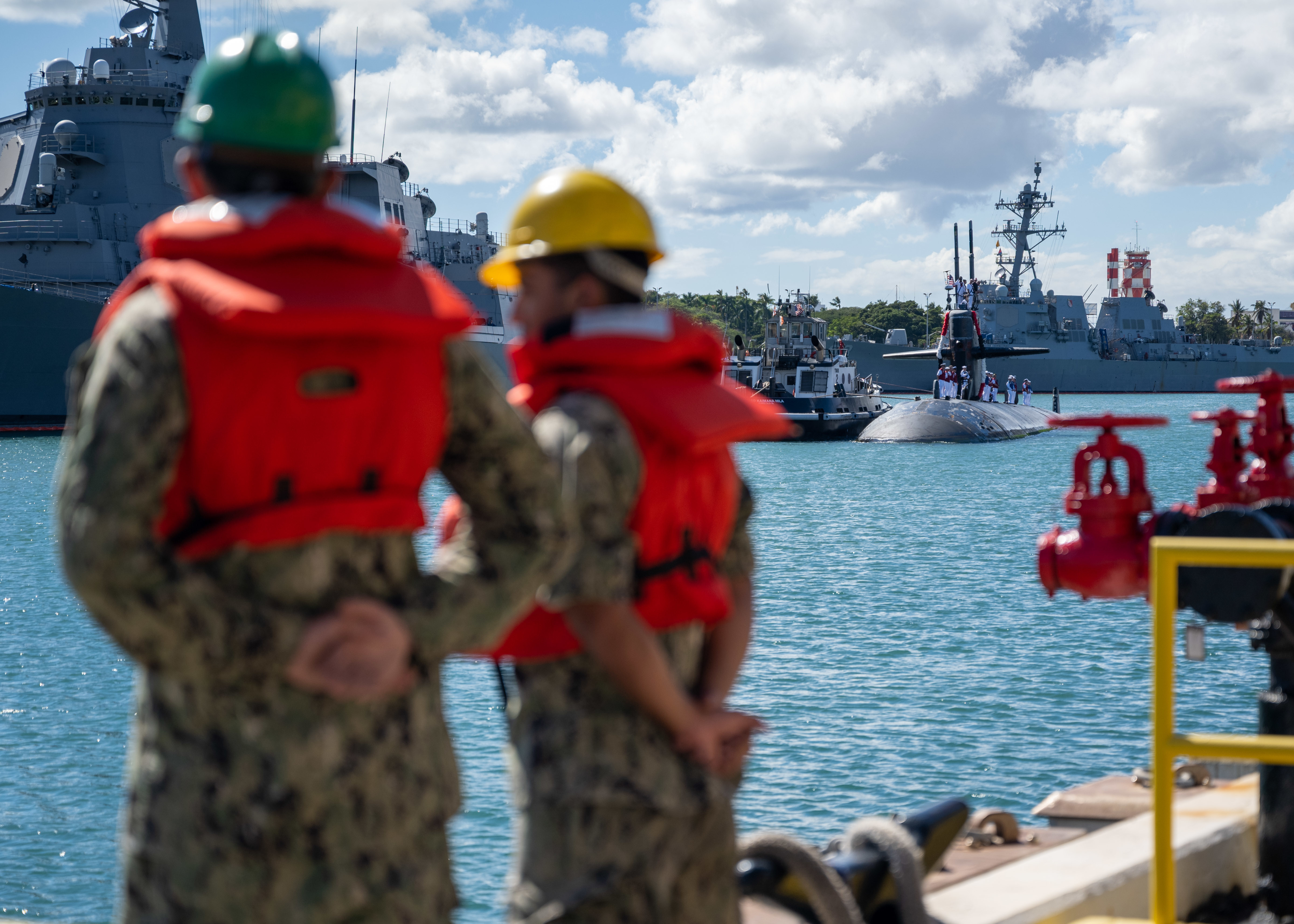 USS Chicago (SSN 721) returns to Joint Base Pearl Harbor-Hickam after completing a deployment in U.S. 7th Fleet on Nov. 2, 2022. US Navy Photo

On Wednesday, USS Chicago (SSN-721) returned to Joint Base Pearl Harbor-Hickam following a seven-month deployment that began on March 28. It was the submarine’s final deployment before decommissioning, which is scheduled for 2023 following 37 years of service, according to a U.S. Navy news release.