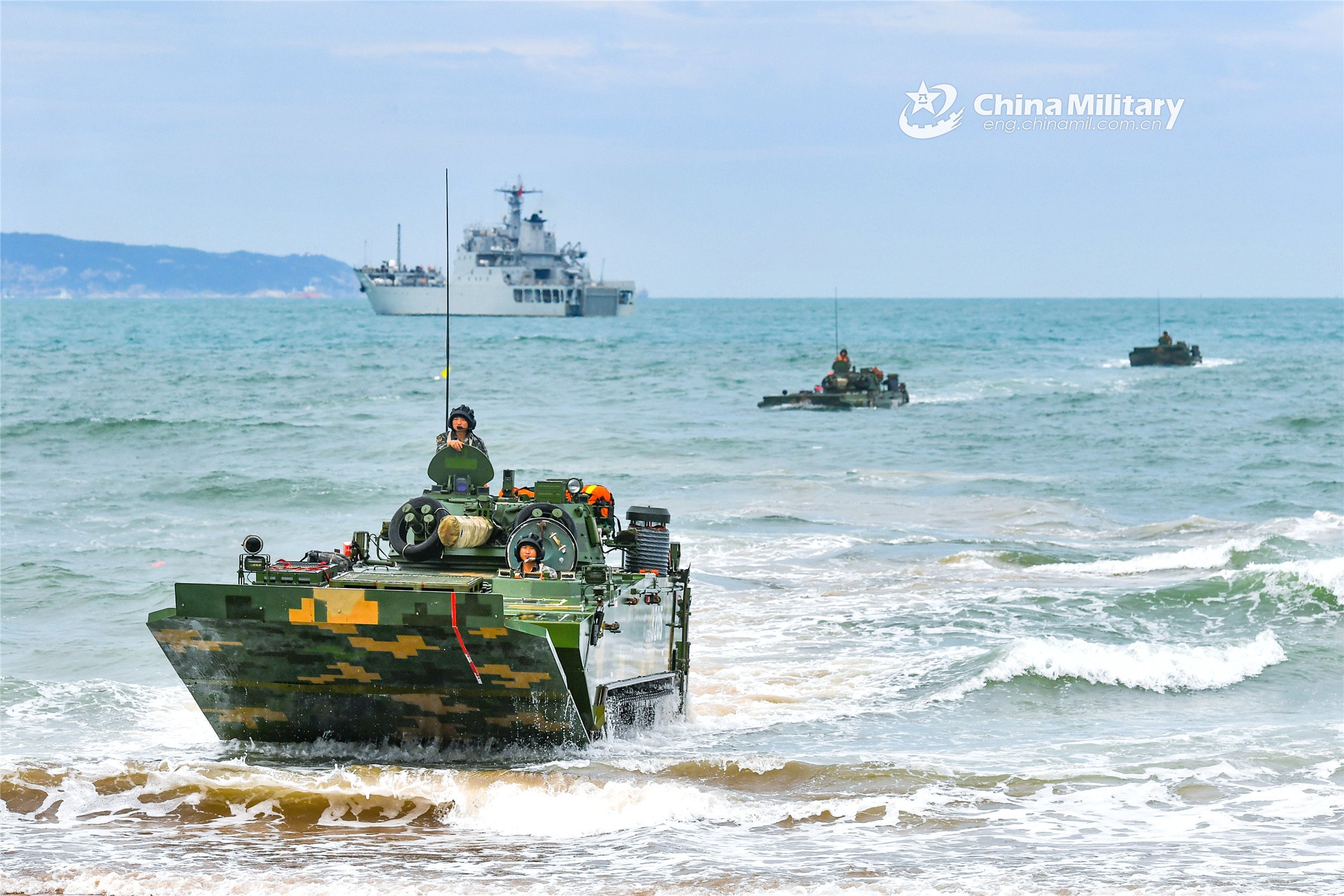 Amphibious infantry fighting vehicle, soldiers assigned to an army brigade under PLA Eastern Theatre Command stay on alert and prepare for landing during a ferrying and assault wave formation training exercise on May 7, 2022. PLA Photo

Amid concerns that China could try to reunify the mainland with Taiwan faster than previously anticipated, the United States Navy is also eyeing a more immediate window for a potential conflict over the island, the service’s top officer said Wednesday.

The Navy is still assessing how China’s recent 20th Party Congress meeting affects its plans for the fleet, Chief of Naval Operations Adm. Mike Gilday said at a virtual event hosted by the Atlantic Council.

“It’s not just what President Xi says, but it’s how the Chinese behave and what they do. And what we’ve seen over the past 20 years is that they have delivered on every promise they’ve made earlier than they said they were going to deliver on it,” Gilday said when asked about the so-called “Davidson window,” referring to former U.S. Indo-Pacific Command chief Adm. Phil Davidson testifying to Congress in 2021 that China wanted the capability to seize Taiwan within the next six years.

During the Chinese Communist Party meeting on Sunday, President Xi Jinping reaffirmed China’s ambitions to reunify Taiwan with mainland China. The next day, U.S. Secretary of State Antony Blinken said the People’s Republic of China is moving on a faster timeline to take over the island.

U.S. Navy officials and members of Congress have invoked the 2027 timeline since Davidson’s March 2021 testimony before the Senate Armed Services Committee, when he said the threat of China taking Taiwan was more imminent.

During the conversation at the Atlantic Council, Gilday also made the case for why readiness is his top priority as CNO.

“We are still recovering with our carrier force as an example for back-to-back deployments that we did 10 years ago. And so we’re still catching up on deferred maintenance so that we can get 50 years out of those platforms. So I’m not going to come off of the maintenance piece in terms of an area where we can save money because we just can’t,” he said. “And I would say the same thing about supply parts – about missiles and magazines, about training and readiness for the force. I just don’t think we can skimp on that. There are lessons of the past as recent as 2017 with the collisions that have caused me to rethink anybody’s challenging the money we’re putting into readiness and training.”

Gilday also discussed the Navy’s Project Overmatch initiative – meant to connect platforms and systems to a network that can share and transmit targeting data.

“Some of our allies and partners – I’m not going to mention which ones – but those that we see a higher likelihood of interoperability in the near term, we are sharing our Project Overmatch work with them. They’re highly interested. Some of our heads of navy have been to San Diego to visit Adm. Small and his team at [Naval Information Warfare Systems Command],” the CNO said, referring to Rear Adm. Doug Small, who Gilday put in charge of leading the Project Overmatch effort.

“And so it’s not lost on me the power of including them. We have to be inclusive, or we’re not going to be able to fight together. So we’re moving forward I think at a good pace with our allies and partners in that effort. We’re not holding back.”

While Gilday would not say which countries the U.S. is sharing the Project Overmatch information with, Navy officials have repeatedly made the case for interoperability and operating interchangeably with nations like France and the United Kingdom.

Another avenue for the U.S. Navy’s work with allies and partners has been the Task Force 59 effort in the Middle East, where U.S. 5th Fleet commander Vice Adm. Brad Cooper is leading the charge on using unmanned systems to collect data for situational awareness in the region.

Gilday said that this work with allies and partners is helping the U.S. field unmanned capabilities within the next five years.

“And so we’re closing that gap with unmanned and we’re learning from it. And as a result of that, working closely with allies and partners, we’ll be able to field capability in this FYDP,” he added, referring to the Pentagon’s five-year budget outlook known as the Future Years Defense Program.