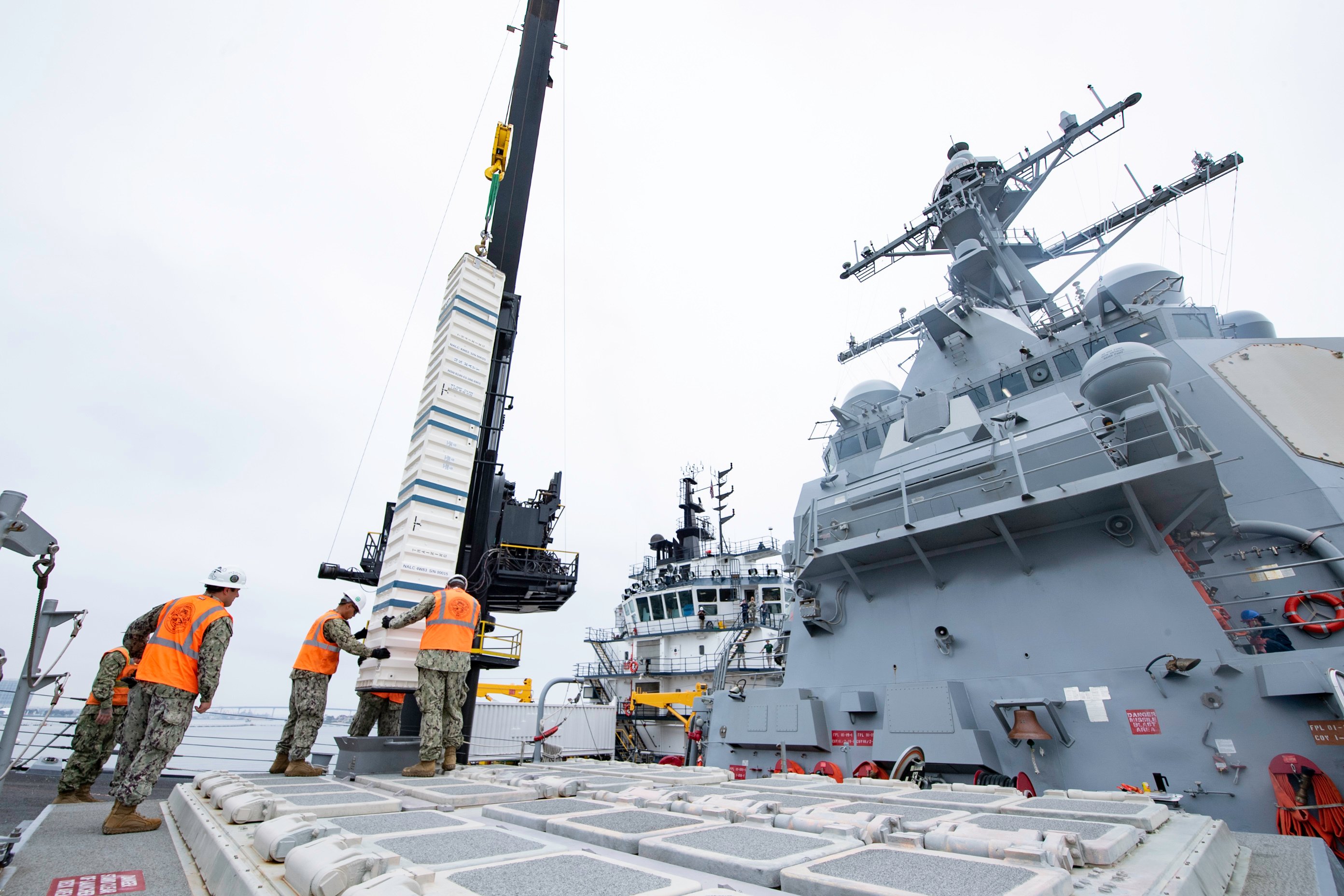 A pairing of a guided-missile destroyer and a supply ship in San Diego Bay last week was the Navy’s latest test to learn how to resupply its warships with missiles during a high-end conflict.

The test marked the first time the Navy has used an offshore support vessel to test the reloading of the vertical launch system aboard a warship, officials announced.

“There was an open-ocean work scheduled. They did not do it. They had some safety concerns,” he said. “Because of excessive roll, they didn’t do the open-ocean transfer.”

It’s unclear if the Navy would conduct an open ocean, at-sea reloading of a ship’s VLS. “They’re working out the after-action reports, and there will be a determination” at some point, Robertson said. He declined to speculate when that might occur or with which mix of ships and support vessels. 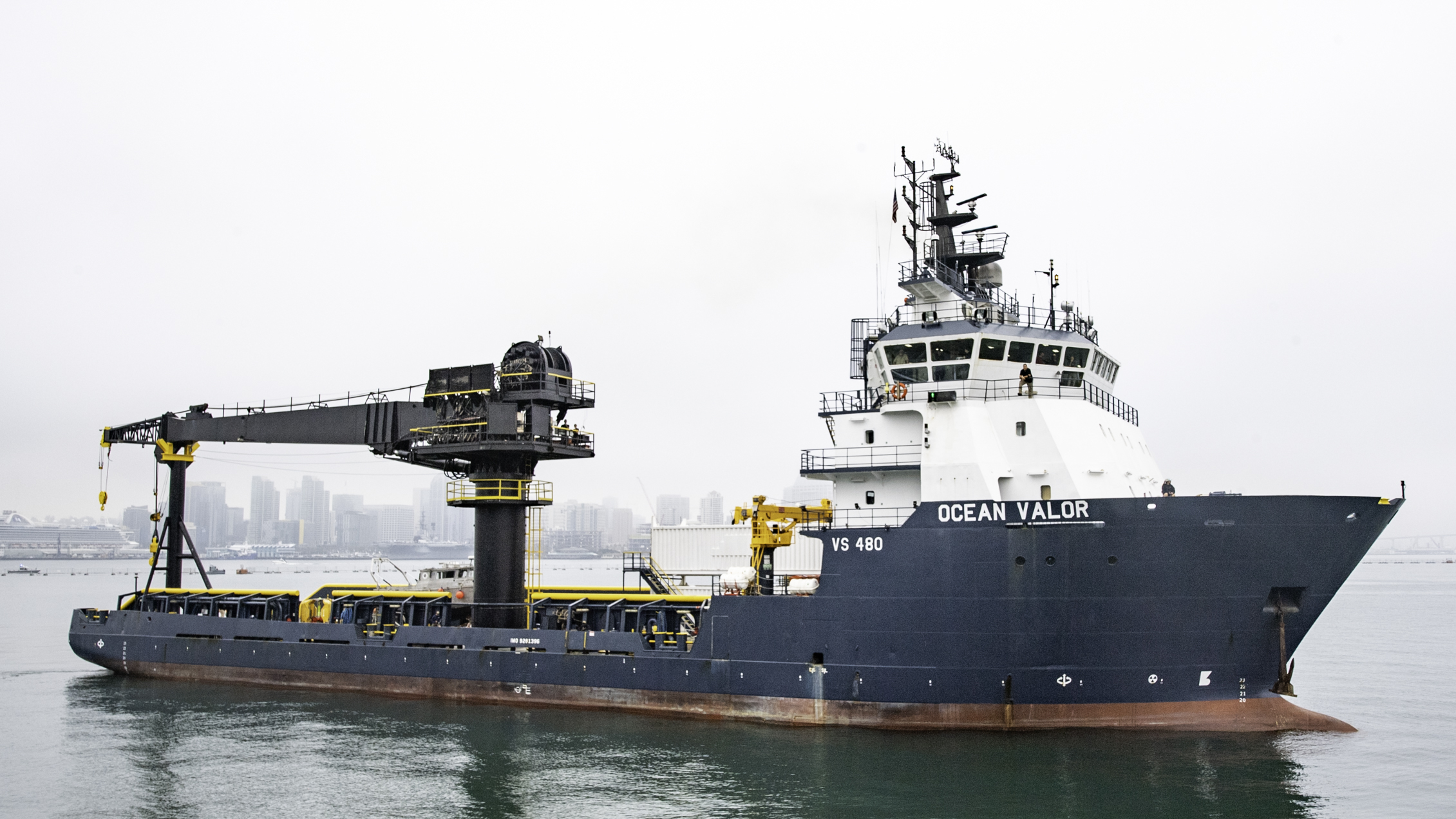 Military Sealift Command fleet experimentation ship MV Ocean Valor maneuvers alongside Arleigh Burke-class guided-missile destroyer USS Spruance (DDG 111) in order to conduct a proof-of-concept evolution in San Diego, Oct. 5, 2022. US Navy PhotoThe Navy, in recent years, has been pursuing the capability to reload a warship’s VLS while at sea and, presumably, closer to the maritime fight. The recent years’ VLS reloading experimentation has involved a number of Pacific Fleet ships.

In 2021, the dry cargo ship USNS Amelia Earhart (T-AKE-6) and guided-missile destroyer USS John S. McCain (DDG-56) experimented with VLS reloading at sea, Robertson said. That was preceded in 2019 by two separate VLS-reloading tests, which “were pierside and protected harbor only. There were no open ocean events.”

The first one that year was in May 2019 and involved the guided-missile destroyer USS Curtis Wilbur (DDG-54) and the dry cargo/ammunition ship USNS Richard E. Byrd (T-AKE-4). Both ships had participated that month in the combined maritime exercise Pacific Vanguard off Guam. The second, held in August 2019, involved the dry cargo/ammunition ship USNS Washington Chambers (T-AKE-11) and guided-missile destroyer USS Wayne E. Meyer (DDG-108).

Options for the Pacific Fight 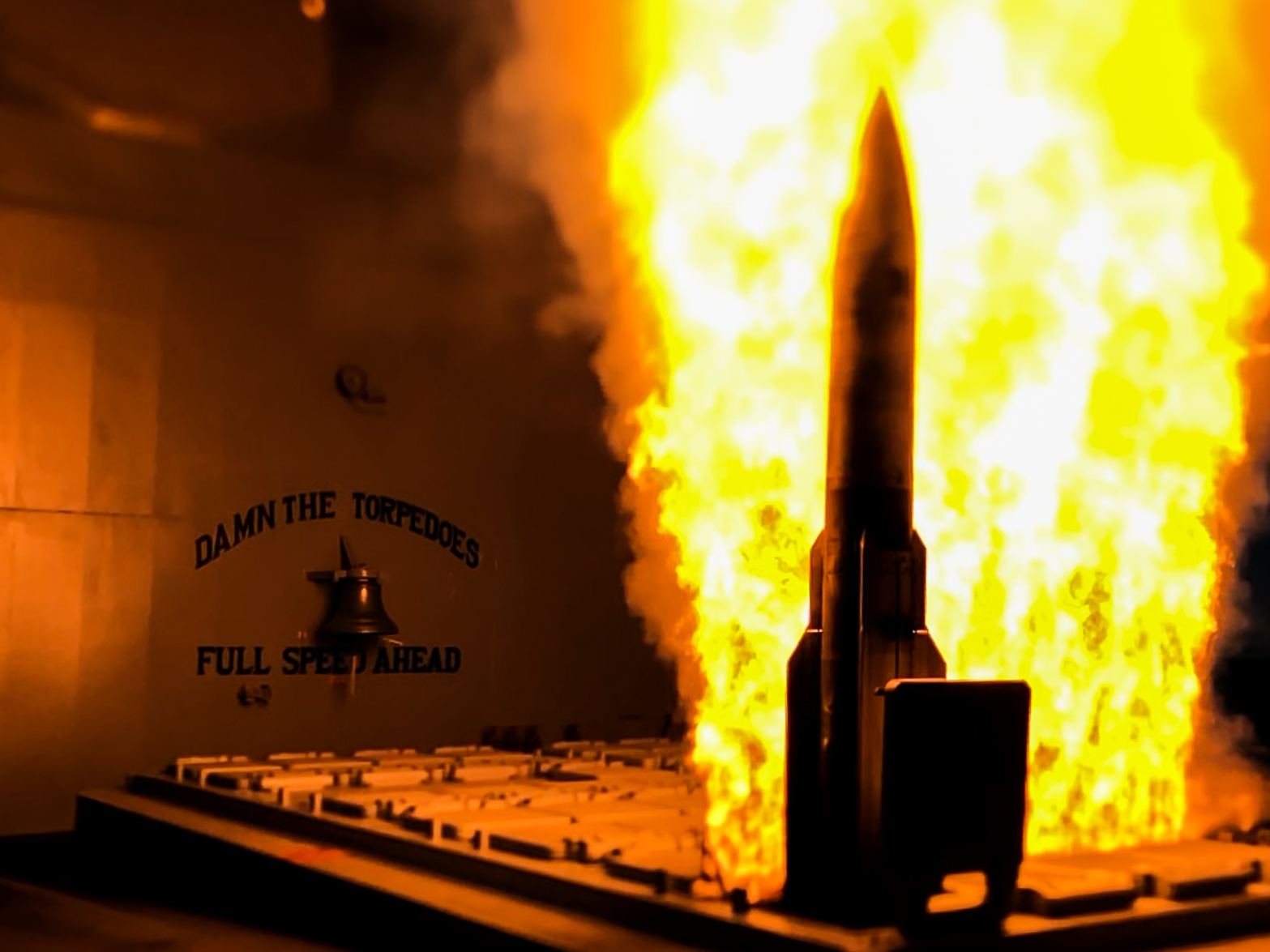 An SM-2 missile launches and destroys an airborne training target during a successful first test of the updated AEGIS Baseline 9 weapons system aboard the guided-missile cruiser USS Mobile Bay (CG 53) on Oct. 24, 2017. US Navy Photo

The ship-to-ship transfer of missiles, especially in the open ocean, is no small feat. Missiles in the Navy’s fleet of cruisers and destroyers are stowed in individual cells of the MK-41 Vertical Launch System, but they can’t be reloaded while the ship is underway. The missiles must be loaded by cranes — which would be difficult to do at sea.

A ship today needs to return to a port or reach a safe, calm harbor where it can reload its VLS from a support ship – and be a safe distance from threats from adversaries, like China or Russia. That also means that ships, especially in the vast Pacific region, will be out of the fight for days or weeks, with time lost to transit but also with the added potential enemy threats from air or space.

The loss of a warship that needs to travel far to a safe harbor to get its resupply of missiles is a problem for the surface fleet.

“Those ships are gone for a month, basically. If the fight is only going to last a month or two, that means you get one use out of them and that means they’re out of action for the remainder of the war,” naval analyst Bryan Clark told USNI News.

What’s needed is a reload capability closer to the front, “maybe a few days away, maybe in the Third Island Chain or Second Island Chain islands,” in the case of conflict with China, said Clark, a senior fellow and director of the Center for Defense Concepts and Technology at the Washington, D.C.-based Hudson Institute. “Or you can even do it alongside a really big ship, like an [mobile landing platform] or an ESD, that allows you to make it so there are more locations to reload and, more importantly, you can reload closer to the area of action.” Those larger ships, like the expeditionary sea bases, also could offer protection in calm seas.

Auxiliary ships like the fleet of T-AKEs and LMSR vessels, if tasked, could be positioned “outside the fight. The whole purpose is to make it so it’s only a few days away, as opposed to it being two weeks to a month away to reload,” he said. “You’ve got a shrinking surface fleet, so we need every ship to contribute as much as possible.” Clark had authored a 2017 paper – Commanding the Seas: The U.S. Navy and the Future of Surface Warfare – that noted the shortfall in VLS reloading capability and early experimentation.

Challenge of the Open Ocean 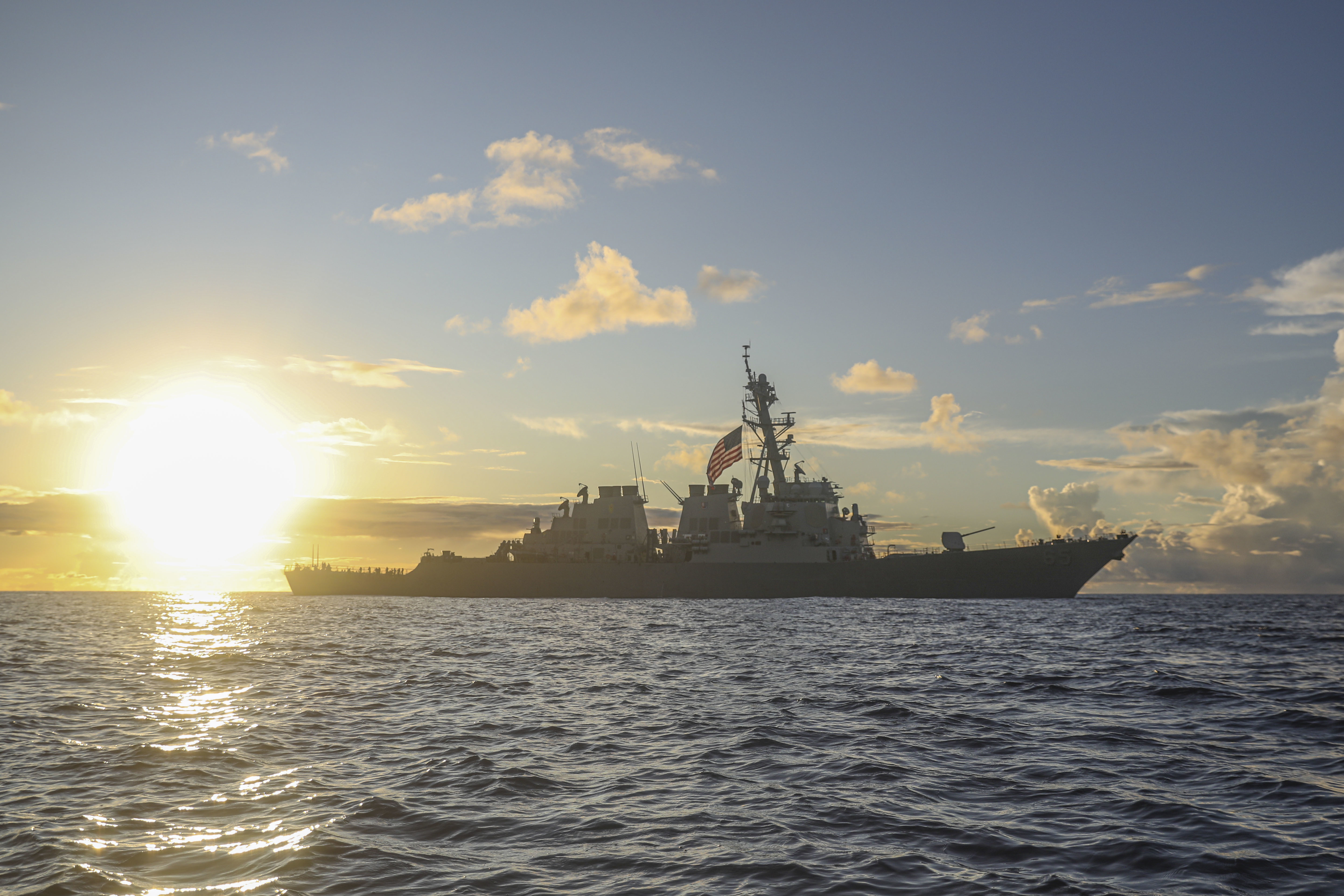 Navy officials “probably need to figure out a way to reload surface combatants with air defense missiles to get them to get back in the fight so they can continue to protect the carriers and protect places like Guam. That’s probably why you’re seeing a renewed interest in this idea. That’s why this hasn’t been fixed a long time ago,” Clark said. The surface fleet “would like to see itself as very much this strike contributor, where reloading makes a big difference. But it’s really just not been in practice a major element of their contribution to these war fights, at least as how they’re played out in war games.”

A reload ship tasked to support might be 1,000 miles or three days’ travel away – “that’s far enough away where the PLA would have to decide, do I want to expend a really expensive and scarce intermediate-range ballistic missile on this ship, which may not be something that they’re willing to do,” he said. “You can put the reload ship far enough away and still get benefit from it, because it’s still going to be a lot closer than having to drive the DDG all the way to Guam, potentially, but more likely Yokosuka or Hawaii or maybe Australia. But having the reload ship in the second or third island chain is going to be a lot closer than any of those other options.”

The main obstacle to doing this, he said, “is the willingness of the Navy to outfit some of those auxiliary ships with some of this capability.” The Navy has auxiliary ships in the maritime prepositioning force – although that may take it out of the fleet that supports the Marine Corps – as well as the MSC surge fleet that could be repurposed, as seen in some of the reloading experiments.

“It’s certainly doable,” he added if the Navy “wants to spend the money to buy the gear and then outfit these ships and position them out in the Pacific. I would think that from INDO-PACOM’s perspective, I think that investment makes a lot of sense from a deterrence point of view.”

“The question is,” Clark said, “does the Navy share that idea or does the Navy say, ‘I’d rather spend that money on buying more missiles to fill up my existing magazines or spend it on making sure that we get all the upgrades done to the existing DDG fleet’?”