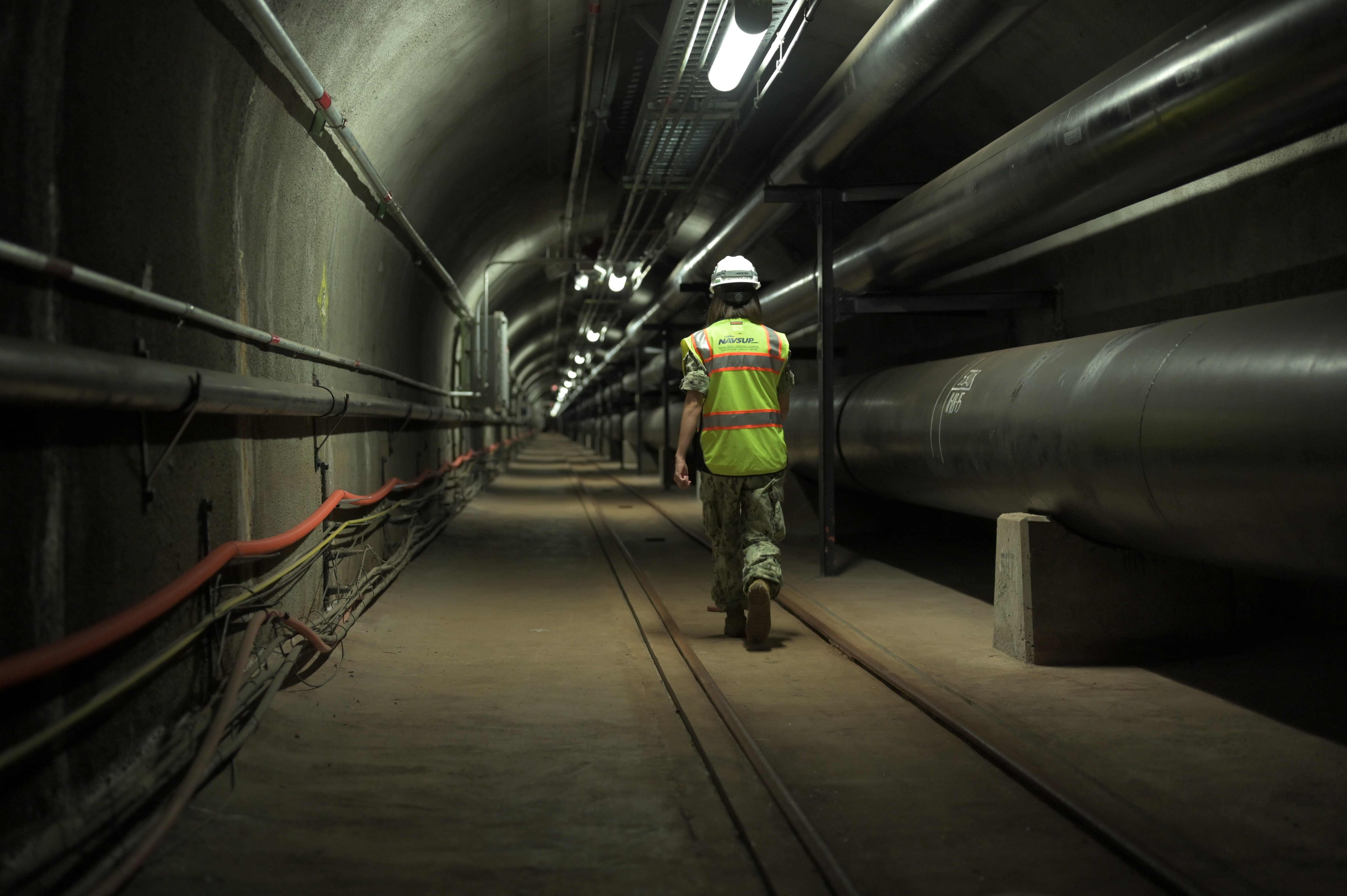 Fuels director, LCDR Shannon Bencs walks a portion of the 7 miles of tunnels of the Red Hill Underground Fuel Storage Facility on July 17, 2020. US Navy Photo

This story has been updated to clarify that Joint Task Force – Red Hill is overseeing the unpacking and defueling of the Red Hill Bulk Fuel Storage Facility.

A water main break on Joint Base Pearl Harbor-Hickham Hawaii, has caused the Navy to delay the first step of removing approximately 1.16 million gallons of fuel from the Red Hill Bulk Fuel Storage Facility.

Joint Task Force – Red Hill, the task force set up by the Navy to oversee the defueling of the fuel facility, was supposed to start unpacking fuel from three pipelines Monday, but the Friday water main break affected the systems that would be used for removing the fuel, Cmdr. Tiffani Walker, a spokesperson for Joint Task Force – Red Hill, said in a statement to USNI News.

Unpacking is expected to start this week, although a date has not been nailed down, Walker said in an email.

Removing the fuel from the three pipelines is the second phase of the Department of Defense’s plan to completely defuel Red Hill. According to the most updated plan, the DoD projects it will completely remove all fuel by July 2024, although it included shortened timelines in its most recent supplement.

To remove the fuel from the pipes, Joint Task Force – Red Hill will slowly open up a valve and use gravity to flow the fuel to a tank farm on the Pearl Harbor side of the base and into permanent holding tanks or fuel barges, Capt. Shawn Triggs, the commander of the Naval Supply Systems Command under the Fleet Logistics Center Pearl Harbor, said in a video on the unpacking.

The fuel will flow through the upper tunnel, lower tunnel and harbor tunnel on the base, according to the video.

It will take one day each for the F-24 and J-5 pipelines and two days for the F-76 pipeline, according to the fact sheet.

Once the fuel is removed from the pipes, the Navy will use pumps to get any remaining fuel from the lines that did not come out, according to the fact sheet.

The pipeline defueling phase of the plan was approved by the Hawaii Department of Health. The Navy has conducted spill accident exercises and training to ensure that the fuel is removed safely, according to the fact sheet.