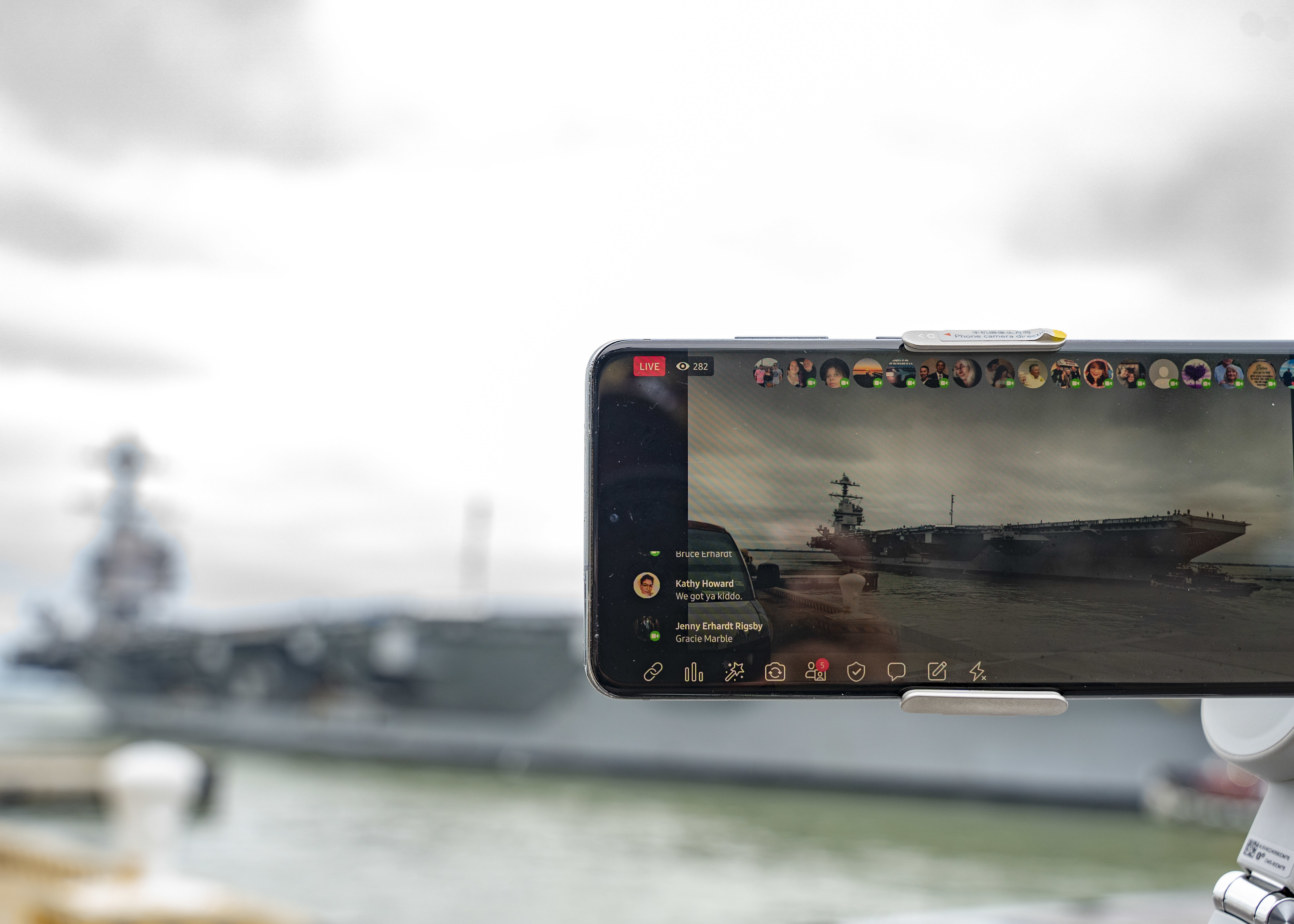 This story has been updated to clarify the amount of ammunition the ship loaded aboard before departing.

ABOARD AIRCRAFT CARRIER USS GERALD R. FORD IN THE VIRGINIA CAPES – After years of delays, the Navy’s first-in-class aircraft carrier is underway on a two-month operational stress test of the carrier’s new systems and air wing as the ship and its crew prepare for an extended deployment early next year.

Ford, the first of its class, has a host of new technologies new to the fleet and will have about 60 aircraft aboard at any given time during the service-retained deployment. The ship is taking about 80 percent of a carrier air wing and embarking with every type of aircraft that operates from a carrier.

“Stressing the flight deck, stressing the air wing – in terms of the sorties that we’re able to generate – and then working within the entire strike group construct to make sure that we’ve got all of our ships operating to the max of their capacities,” Rear Adm. Gregory Huffman, the commander of Carrier Strike Group 12, told reporters aboard the carrier last week.
“We haven’t had a chance to really explore in a strike group setting what the Ford is going to bring to the table. And this is our first opportunity to do that and set the foundation for follow-on deployments – not just the Ford, but the entire class.”

The two months at sea will allow the sailors to move into a more operational mindset compared to the last few years of workups and testing, multiple officers told USNI News during a recent trip aboard the carrier.

“Really we’re just coming out to operate the carrier and show what it’s capable of. So we are a fully operational carrier at this point and we are simply attempting to validate and show folks that we are in fact on that footing,” Cmdr. John Peterson, Ford’s air boss told USNI News.

The multi-national cruise will also allow Ford to exercise with eight other countries and prepare the carrier’s crew for real-world scenarios in which it will work with allies and partners.

“I think it’s a good stress [test] in terms of making sure that we can coordinate appropriately as a command-and-control platform. It starts with language. Are we using compatible publications and procedures? Are we just using the English language in a compatible way?” Ford commanding officer Capt. Paul Lanzilotta said.
“That goes both ways. My sailors have to speak on the radio in a way that’s standard, enunciated properly and intelligible to a unit that’s operating far away from home in a language that probably most of the crew members did not grow up speaking every single day.” 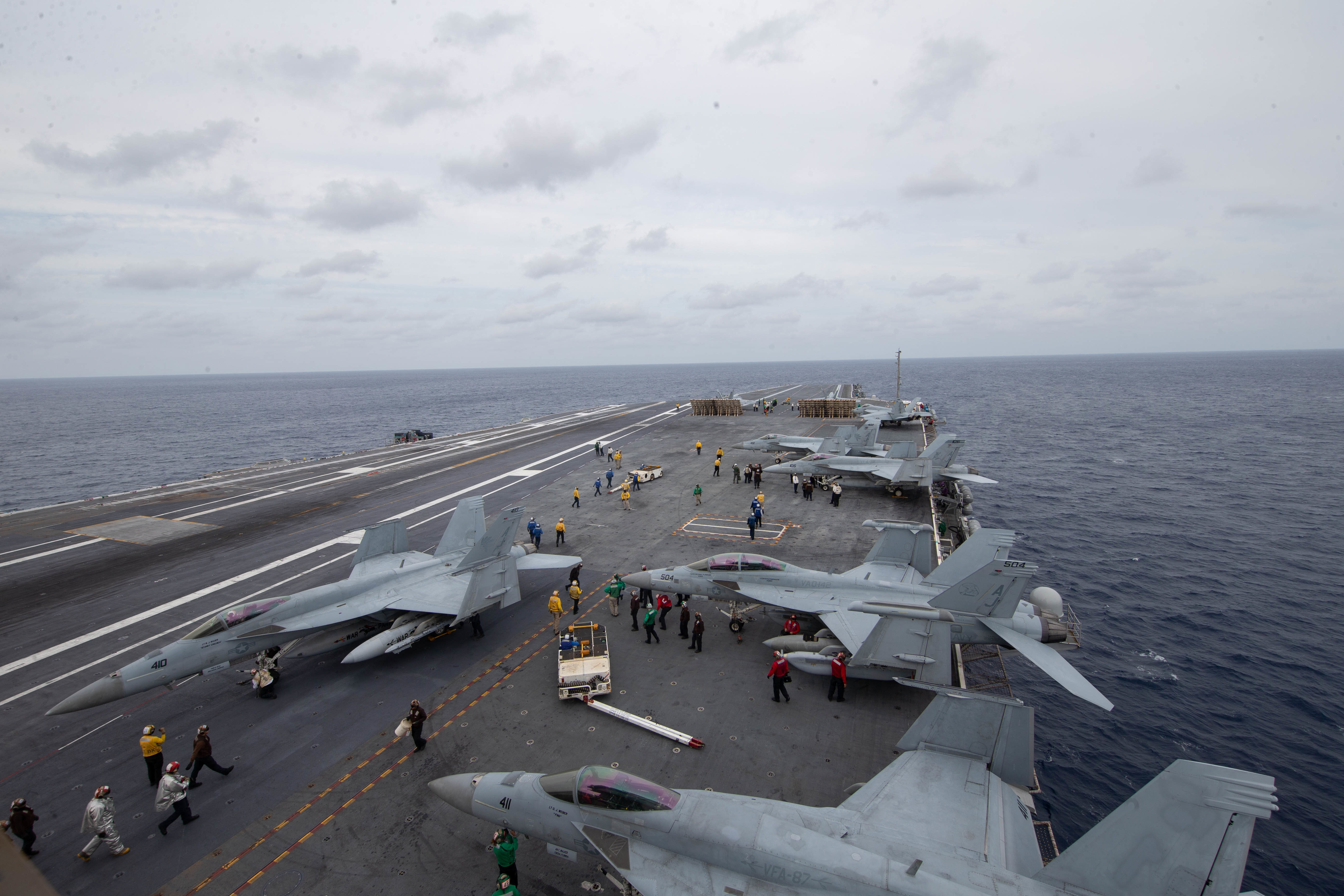 Ford incorporates multiple new technologies aboard that are meant to make the carrier air wing operate faster and more efficiently. For example, the ship has in-deck refueling to make it easier to fuel aircraft without having to drag hoses across the flight deck.

The carrier also features new technologies for the systems that launch and recover aircraft. The Electromagnetic Aircraft Launch System (EMALS) and Advanced Arresting Gear (AAG) are both new systems with software elements that have required extensive testing over the last few years.

“We’ve gone from a very archaic way of catching aircraft per se, with hydraulics, that slowly advance into some electronic upgrades. With this new system, we are able to put less stress on the ship, on the system itself, and on the aircraft,” Ens. Justin Knighton, who is taking over as the aircraft launch and recovery equipment maintenance officer aboard Ford, told reporters in one of the machinery spaces for the Advanced Arresting Gear.

As the sailors have become more familiar with the new AAG system, Knighton said the reliability has improved, but he acknowledged the crew has more work to do to get AAG to where it needs to be years down the road and on future Ford-class carriers.

“Longevity wise we have gotten a lot more proficient. A lot of that has to do with our operators becoming a lot more involved in the systems, having repetition behind the wheel, being able to identify things at quicker levels,” Knighton said. “And then as new software comes out and new hardware changes, kind of take a little step back, it takes us a little time to get used to the new stuff, identify reliability issues and come through them and work with our engineering team up at Lakehurst to develop an engineering change proposal to come through that in the long run.”

The reliability for EMALS, the new launching system that does not use steam like the catapults on the Nimitz-class carriers, has also improved, according to Knighton.

“As far as proficiency, we’ve gotten very good at coming through minor issues. We do not have hardly any catastrophic issues that take us down for extended periods of time. We do have minor issues here and there that we need to troubleshoot throughout the day. A lot of that is the mass amount of redundancy in sensors that we do have within the system,” he told reporters.

“We’ve done a lot of engineering investigations on parts that we’ve found non-reliable that were supposed to be very reliable in the beginning. We’ve had more robust changes for a lot of those things to make sure that they’re not failing. And things have gotten really good with EMALS, especially in the last I’d say two years.”

While past failures of EMALS have brought down two catapults at once, recent issues with the system have been minor, Knighton said.

“We really don’t have as many high-powered issues that we used to have coming through over 10,000 launches with aircraft. So it’s been less effecting to us as far as if we lose a pair of catapults, which it doesn’t happen very often,” he said.

The new elevators bring ordnance to the flight deck faster to arm the aircraft. The AWE operates with electromagnetic motors, unlike the cables used for the weapons elevators on the Nimitz-class carriers.

“We were able to run ammo downstairs in the magazines much quicker because we were able to put extra weight on the elevator, able to run it down quicker, which means you have to run those cycles a lot less,” Fish said.

During preparation for the two-month period, Ford’s crew loaded more than 1,200 tons of ammunition worth about $400 million. It took 1,400 lifts of the elevators over two-and-half days, according to Fish.

“That’s a very good respectable first-time, out-the-gate evolution. That is varsity numbers for our first time and that was absolutely on the work of my sailors here,” he said. 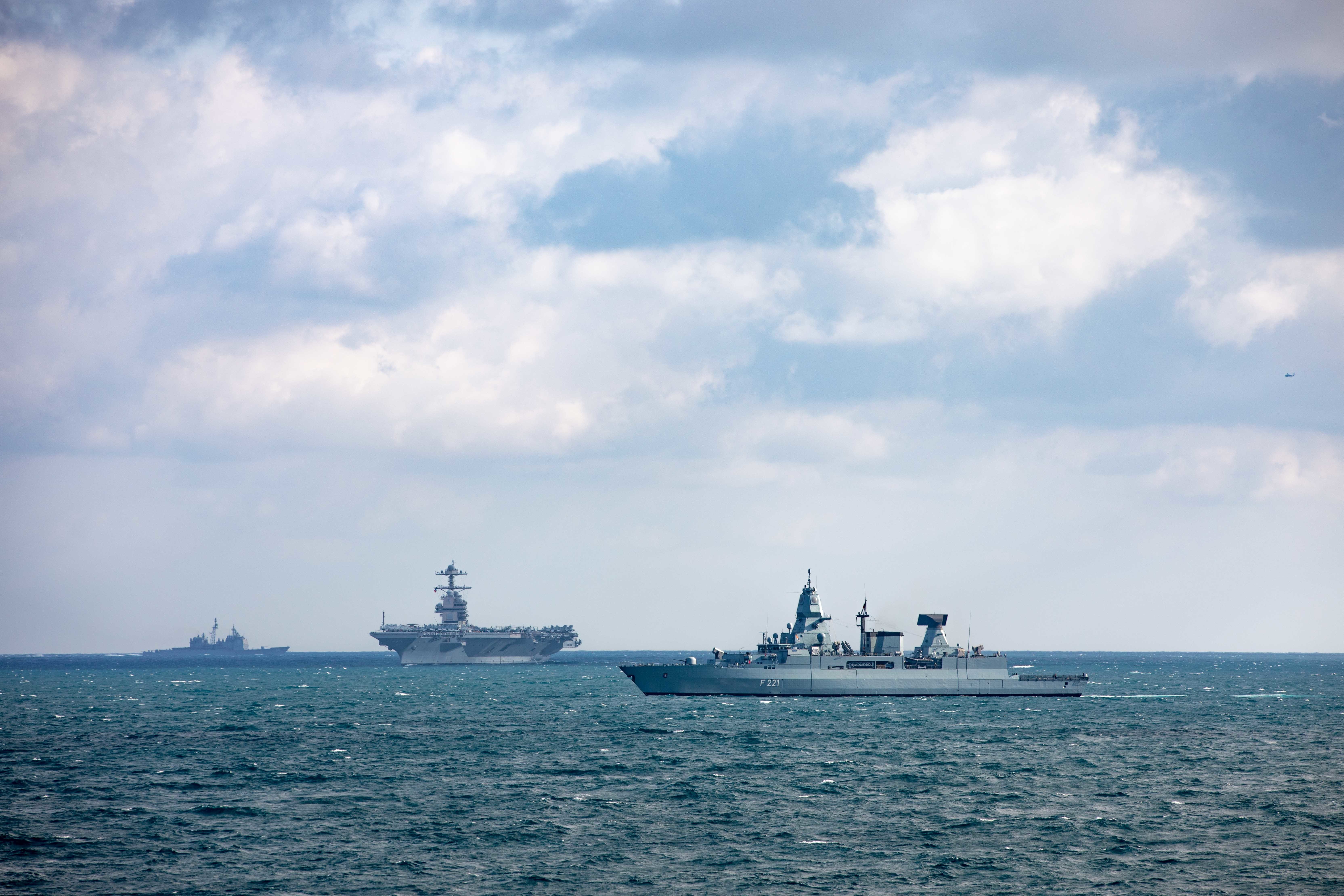 Ford’s two months at sea will allow the carrier and its escorts to work with multiple NATO and NATO-aspiring nations, including Finland and Sweden. During USNI News’ time aboard the carrier last week, German frigate Hessen (F221) was operating nearby.

“This is really a chance to work with a full strike group with almost a full air wing,” Huffman told reporters.
“And then with those allies and partners, to get a good understanding of how the Ford – with its new capabilities – will be able to interact with different ships and perhaps change how we do tactics from a big picture perspective. So that’s what we look to do is just basically explore that new technology and see what kind of operations we can develop out of that.”

Ford will also work with ships and aircraft from France, Denmark, Spain, the Netherlands and Canada while at sea this fall. During the next two months, Ford will pass control of air wing assets to the allies operating nearby with the carrier strike group.

“If we suffer a casualty and we need to push something over to another ship – whether they suffer one or we suffer one – our ability for them to immediately and easily and coherently pick right up where we left off, or wherever that unit was that may be temporarily taken out of the fight, their ability to do that, we have to have that capability,” said Capt. Daryl Trent, the commander of Carrier Air Wing (CVW) 8.

“And that is one of the strengths of our partners that we’re working together – not only legitimizes what we’re doing but also gives us the capability of, ‘hey we can pass this over to you. We’re going to do some maintenance or troubleshooting on a system. You can take it for now.”

The chance to work with the French Navy is unique because the French and U.S. aircraft can cross-deck between each other’s carriers, Lanzilotta noted. The French carrier FS Charles de Gaulle (R-91) uses the same catapults and arresting gear to launch and recover aircraft as the U.S. Nimitz-class carrier.

“Whenever we are in the vicinity of a French aircraft carrier, we immediately start operating together in an interchangeable fashion. That’s true allied operations. I’m excited for the opportunity to do that,” said Lanzilotta. 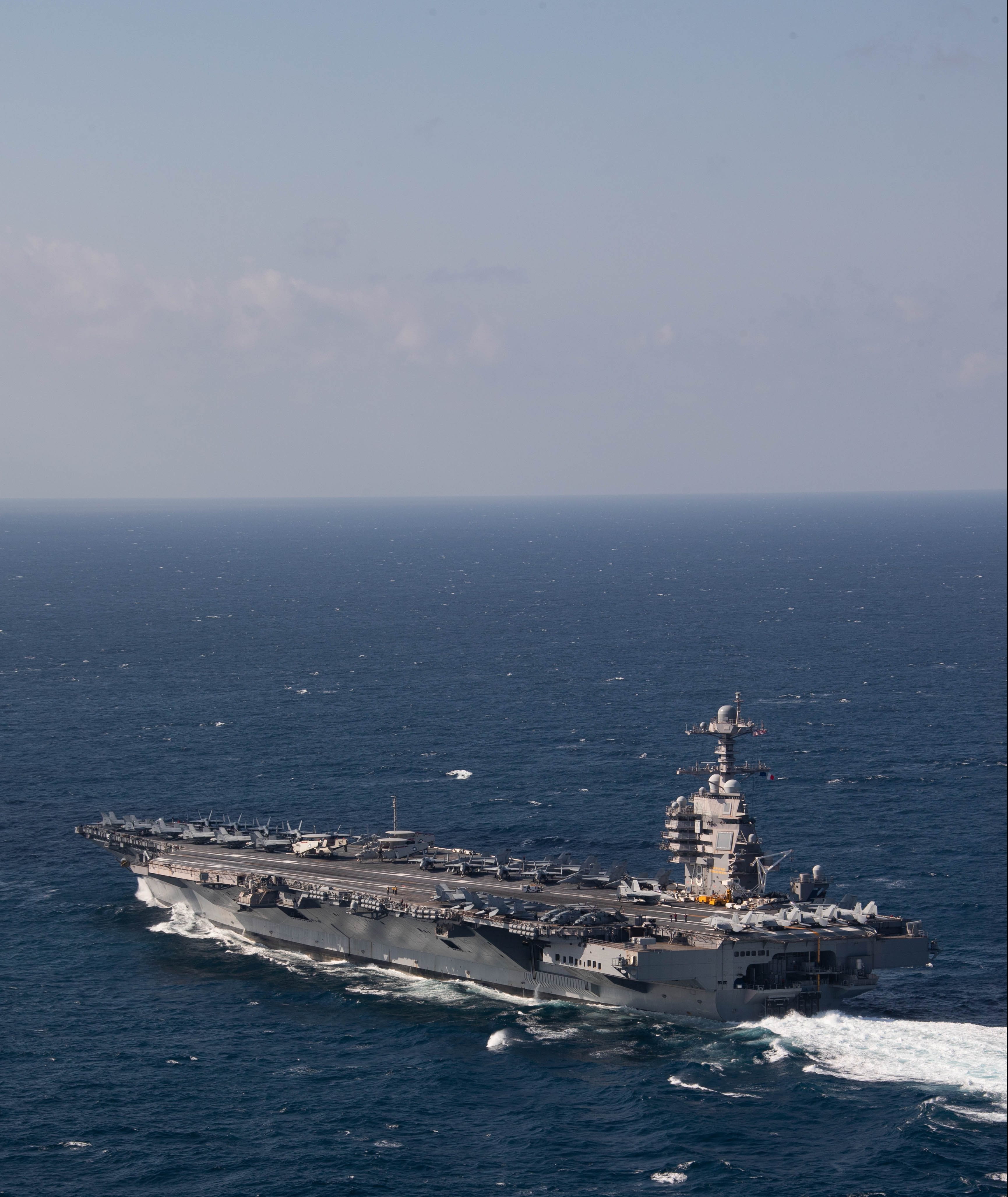 The lifespan of aircraft carriers – anywhere from 50 to 60 years – means Ford will remain in service as new technologies like unmanned air vehicles and weapons like lasers are introduced.

Multiple officials during USNI News’ visit to Ford noted the carrier has room to grow and evolve with these modernization efforts.

“This ship was built as a new class with a lot of expanded capability but also with margin for more. So while our propulsion plant is new and pushing us through the water at a good pace … the electrical generation capacity of this ship is not even close to being taxed,” Lanzilotta said. “So as things develop in the coming years, as advanced weapons come online from the United States side, I expect those to be able to be installed on the ship whether it’s in a yards period or some other modernization period, and bring our lethality up even higher over the course of the ship’s life, which is 50 … maybe 60 years.”

The carrier’s electrical plant has extra cooling capacity, meaning the Navy can add new weapons like lasers to the ship and install new capabilities during future maintenance availabilities.

“With the room to grow and the fight of the future that may go on, whatever weapons systems they bring on – whether it be self-defense or be offensive to go over the horizon – there’s a lot of spare electric plant equipment,” said Cmdr. Homer Hensy, Ford’s chief engineer. 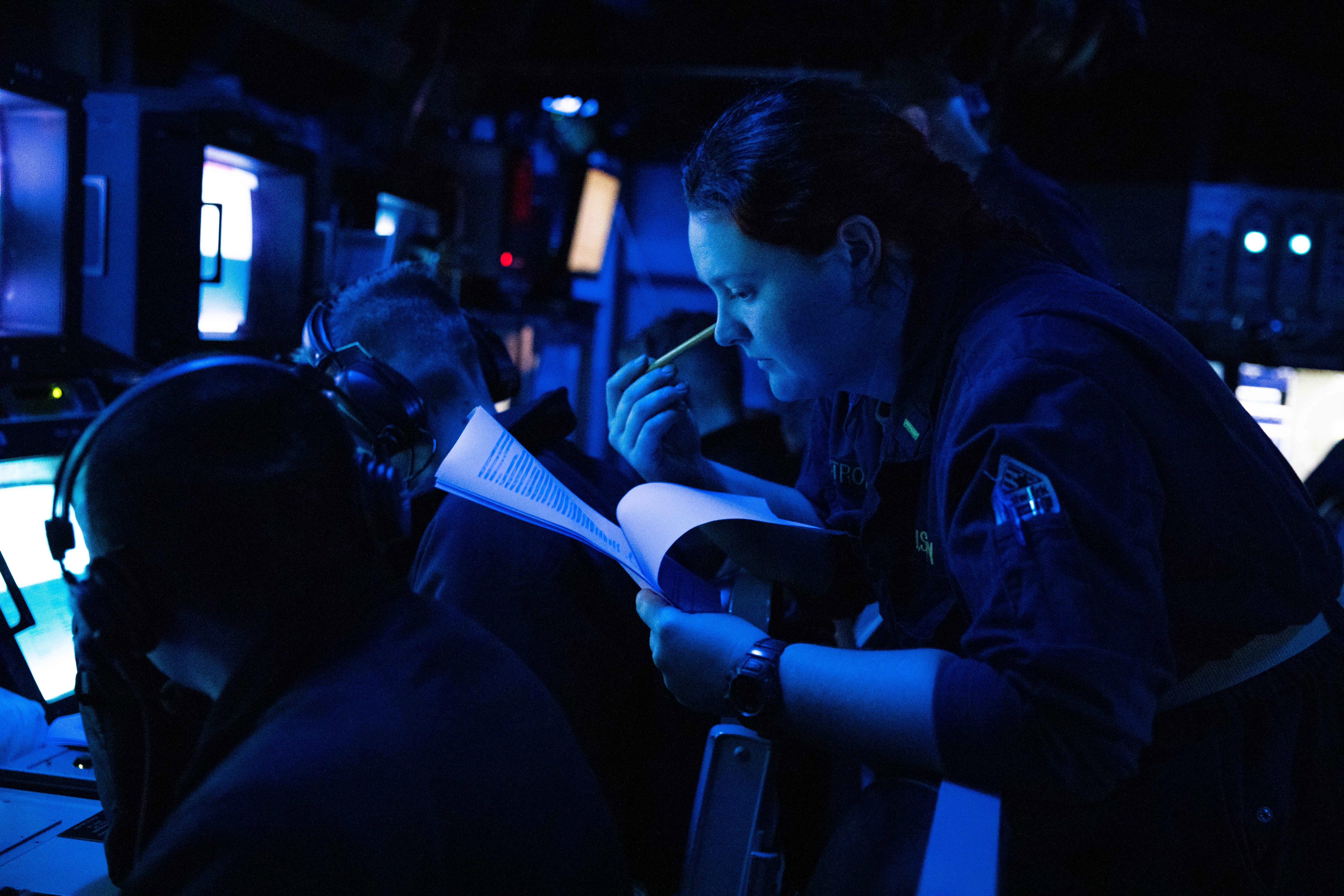 “The breakers and operations and logic controllers that aren’t quite set in, that we’re just waiting for the time to install those, do a system operability test for whatever the combatant commander needs for over the horizon – whether it be the Pacific Fleet or the European theater,” he said. “Either way we go on there, our public yards are ready to operate through the whole planning yard and to install those systems for whatever period we get to make sure that the ship is ready and most modern to defend [against] whatever the threat is in the future.”

The margin will also help the carrier air wing evolve with new technology and platforms, and incorporate the fifth-generation F-35C Lightning IIJoint Strike Fighter Lightning II and future unmanned aerial vehicles. The Navy’s sixth-generation Next Generation Air Dominance (NGAD) program is expected to include a manned fighter, known as F/A-XX, that will operate as the nucleus for the service’s manned-unmanned teaming concept.

“Over time we’re going to go, as a force, we’re going to go to a lot of manned-unmanned teaming capabilities out there. That is the future,” said Trent, the CAG.
“And that is what the ship is built for and is going and there are certainly other systems that they’ve got a lot of growth capability in the future that is absolutely amazing, as we develop our weapons systems to the fight of the future.”