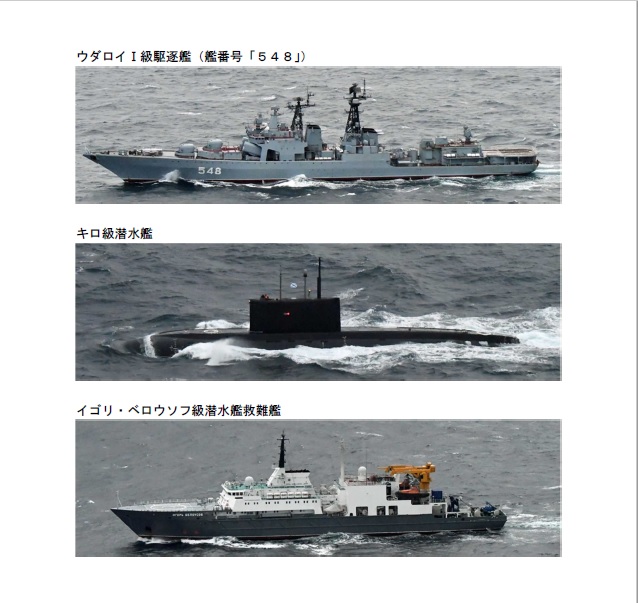 A Russian Navy Kilo-class submarine, along with two Russian Navy ships, transited La Pérouse Strait on Friday, according to a Friday Japan Ministry of Defense release.

The Russian ships sailed westward through La Pérouse Strait into the Sea of Japan. The Russian vessels were monitored by fast attack craft JS Kumataka (PG-827) and JMSDF P-3C Orion MPAs of Fleet Air Wing 2, based at JMSDF Hachinohe Air Base, Honshu, according to the release.

Chinese People’s Liberation Army Navy (PLAN) ships also continued to operate around Japan this week, although at a lower number and tempo.

A PLAN Dongdiao class surveillance ship carrying hull number 796 was spotted about 60 miles west of the coast of Aomori Prefecture, Honshu, early Sunday, and sailed northeast towards the Tsugaru Strait between Honshu and Hokkaido, according to a Monday statement from the MoD.

However, the ship turned around about 13 miles west of Cape Tappi and sailed southwest into the Sea of Japan. Multipurpose support ship JS Suo (AMS-4302) monitored the PLAN ship, according to the release.

A PLAN frigate was sighted sailing east in an area 30 miles north of Aguni Island, which is located northwest of Okinawa, early Sunday, according to an MoD release.

The frigate was identified as CNS Hengshui (572). The ship then sailed north along the western side of the Nansei Islands, and on Monday, was sighted 56 miles southwest off Kusagaki Island where it turned west to sail into the East China Sea.

On Tuesday the JSO said Dongdiao 796 was spotted sailing southwest in an area 120 km north of the Oki Islands. On Tuesday, it sailed southwest through the Tsushima Strait into the East China Sea. 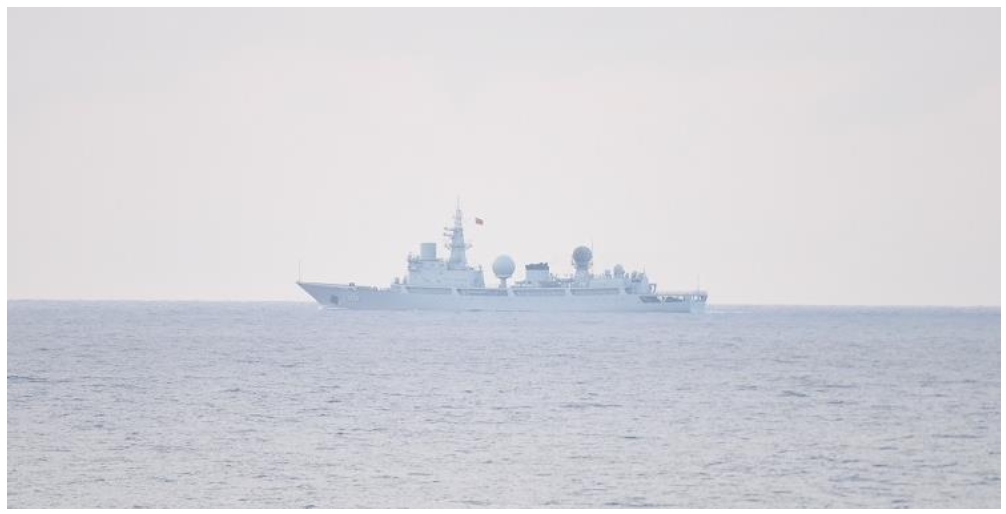 “Merging the two staffs simply makes sense. It’s an idea that’s really well-suited to this region,” said Rear Adm. Derek Trinque, commander, Task Force 76/3, in the release. “A command that is truly a Navy and Marine Corps team provides the most capable and most ready force to commanders in the key maritime terrain of the Indo-Pacific.”

Task Force 76/3 is an experiment for proof of concept, and following the experimentation period, feedback will be provided back to senior Navy, Marine Corps and defense leaders with lessons learned and in order to determine the way forward.

Under Noble Fusion 22.2, Task Force will be experimenting, operating and evaluating naval integration concepts through operations at-sea and ashore and will concurrently participate in operations and exercises throughout the Indo-Pacific. TF 76/3 will support the 3rd Marine Division during Exercise Kamandag 6, which began Monday in the Philippines and will additionally participate in exercises and operations throughout the fall, according to the release.

There are currently 1,900 U.S. Marines in the Philippines conducting Exercise Kamandag 6 with 530 Philippine Marines and 100 personnel from the Philippine Navy and Air Force. The Republic of Korea sent 120 Marines for the exercise, joining 30 personnel from the Japan Ground Self Defense Force (JGSDF) Amphibious Rapid Deployment Brigade who will participate in some portions of the exercise, including parts that involve coastal defense, humanitarian assistance and disaster relief, maritime security, combined arms, amphibious operations and special operations, according to a Marine Corps release.

The exercise is being across Luzon, Batanes and Palawan in the Philippines and includes a combined arms live-fire exercise in central Luzon featuring aircraft and High Mobility Artillery Rocket Systems (HIMARS), as well as amphibious operations along the eastern and northern coasts of the Philippines. Exercise Kamandag 6 ends on Oct. 14.

In Hokkaido, Japan, 1,400 Japan Ground Self-Defense Force personnel from the 2nd Division, Northern Army and 1,600 U.S. Marines from across III Marine Expeditionary Force are conducting Exercise Resolute Dragon 22 which began on Oct. 1 and ends on Oct. 14.

“Today, as the security environment surrounding Japan becomes more turbulent, there is a need to further strengthen the deterrence and response capabilities of the Japan-U.S. Alliance,” said Gen. Yuichi Togashi, the JGSDF 2nd Division commander said in a Marine Corps release. “ we recognize that Resolute Dragon, the largest field training exercise with the U.S. Marine Corps in Japan, is extremely important in terms of further strengthening the cooperation between the Japan Ground Self-Defense Force and the U.S. Marine Corps. It is my hope that through this training, the Japanese and U.S. forces will deepen mutual understanding, improve their tactical skills and joint response capabilities to the operational level, and, in turn, further strengthen the Japan-U.S. Alliance”.