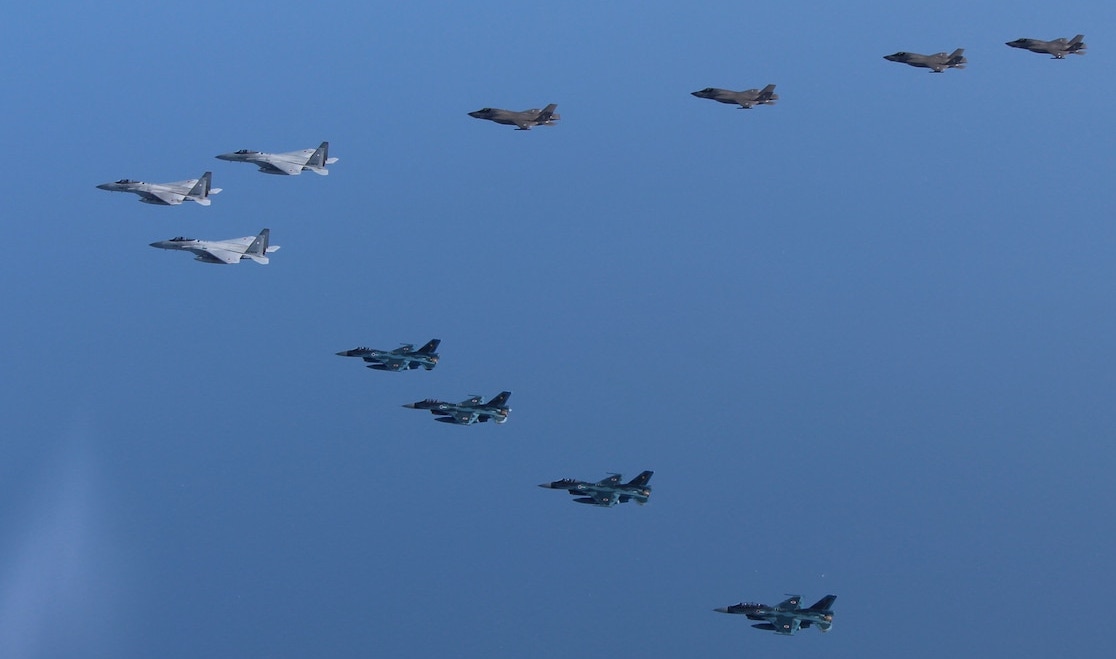 Eleven U.S. and Japanese fighters flew a show of force mission over the Sea of Japan following a North Korean missile test over the Japanese home islands, a Pentagon spokesman said on Tuesday.

“Our ability to work and fight and deter alongside our partners is critical in terms of deterrence, demonstrating that we do have the capability to fight together when and if we need to,” Pentagon spokesman Brig. Gen. Pat Ryder told reporters on Tuesday afternoon.
“These exercises are an opportunity for our military members to work together to exercise those capabilities to one: send a message that we are prepared, and two: that if we need to fight, we can and we can do it together.”

The missile flew a provocative flight path over the Japanese home islands before splashing down in the Pacific. The launch was the first North Korean missile test over Japan since 2017 and prompted warnings for residents on the island of Hokkaido and the Aomori prefecture, Japanese officials said.

South Korea’s Joint Chiefs of Staff told reporters the missile was launched from the Jagang Province and may have been a Hwasong-12, reported Reuters.

According to U.S. Indo-Pacific Command, the exercise “showcased the combined deterrent and dynamic strike capabilities while demonstrating our nation’s bilateral interoperability. During the exercise they conducted a live Joint Direct Attack Munition (JDAM) strike in the Jikdo Range.”

The two exercises are the latest uptick of U.S. military operations in the region since tensions with Pyongyang have risen during the last several weeks.

The Ronald Reagan Carrier Strike Group completed a round of large-scale naval exercises with Japan and South Korea last week.

As of Monday, the strike group was in the Pacific “just to the east of northern Japan,” according to Monday’s USNI News Fleet and Marine Tracker.

Ryder would not say if Reagan would return closer to South Korea and the Sea of Japan when asked by reporters on Tuesday. In terms of future tests, Ryder warned North Korea of conducting future missile or nuclear tests.

“There have been indications in the past that [North Korea] is preparing a test site for what would be its seventh nuclear test,” Ryder said. “If they do such a test — from our perspective — it would clearly constitute a grave escalatory action,” Ryder said.
“We continue to work with our Republic of Korea and Japanese partners for all contingencies and again, we’re calling the DPRK to cease these types of destabilizing and unlawful actions.”