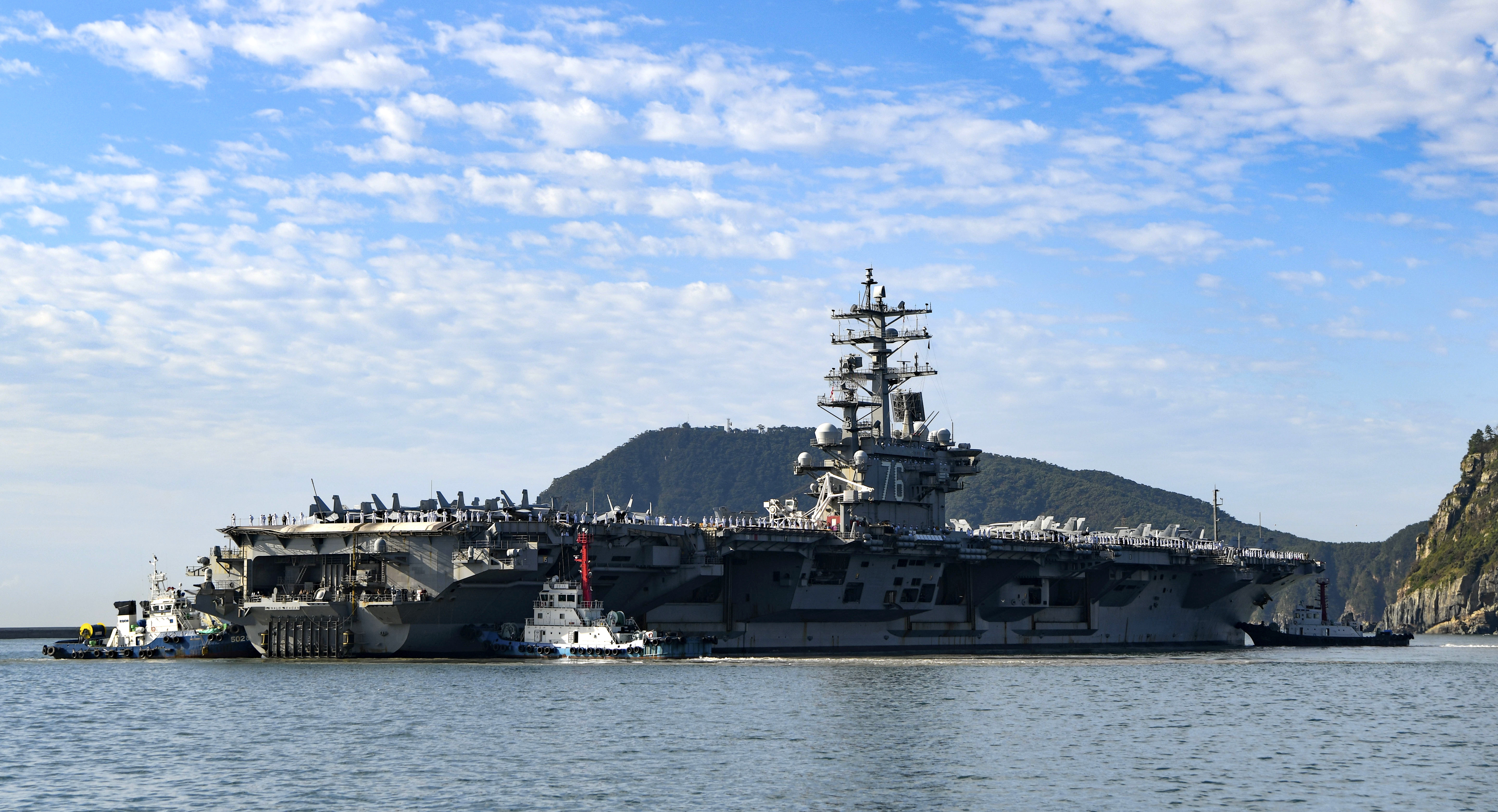 USS Ronald Reagan (CVN-76) made a port call to the Republic of Korea on Friday, the Navy announced. It’s the first port call of a U.S. carrier to South Korea in four years.

“The Ronald Reagan Strike Group’s visit is of strategic importance to the U.S. and Republic of Korea relationship and is a clear and unambiguous demonstration of U.S. commitment to the Alliance,” Rear Adm. Buzz Donnelly the strike group’s commander said in the statement. “We’re excited to return to Busan. Our presence and commitments to the Republic of Korea and the Indo-Pacific region are not new, and visits like this are part of our routine operations in the region that have helped maintain peace for more than 70 years.”

The Reagan CSG will drill with the Republic of Korea Navy next month, following the port visit, which combines both preparations and planning for the drill along with engagement activities and crew recreation. Prior to arrival in Korea, the Reagan strike group conducted drills with the Japan Maritime Self Defense Force (JMSDF) destroyer JS Amagiri (DD-154)

In addition to Reagan, guided-missile destroyer USS Zumwalt (DDG-1000) is operating in the Western Pacific.

Zumwalt departed Guam on Monday after a scheduled port call, according to the U.S. Navy. The visit marks the farthest the destroyer ever been from its home port of Naval Base San Diego, Calif.

Amphibious assault ship USS Tripoli (LHA-7) is currently in the Philippines Sea after drilling with USS America (LHA-6) on Sept. 17 while both ships were sailing in the East China Sea.

Operating around the East China Sea now is the Royal Canadian Navy (RCN) frigate HMCS Vancouver (FFH331) as part of Operation Neon – Canada’s contribution to a coordinated multinational effort to support United Nations Security Council sanctions imposed on North Korea. Canada’s participation includes surveillance and monitoring any ships that break the U.N. sanctions. Vancouver has been conducting the mission since mid-September and it is the sixth such deployment by the RCN since 2018. On Tuesday, Vancouver conducted a Taiwan Straits transit with USS Higgins (DDG-76).

Ivanovets is part of the Russian Black Sea Fleet and has been sighted as part of that fleet since July this year, it is unclear if the ship had been reassigned to the Pacific Fleet or if one of the other Tarantul-class corvettes in the Russian Pacific Fleet, which operates a total of 10 of the class, has been renumbered. Since its invasion of Ukraine, Russia has been painting over the hull numbers of its ships to obscure their identities.

La Pérouse Strait is an international waterway that divides the Russian island of Sakhalin and Japan’s island of Hokkaido. The strait is routinely transited by Russian Pacific Fleet ships moving between the Sea of Japan and Sea of Okhotsk as both seas form part of the fleet operational areas. Japan monitors closely the activities of Russian and Chinese naval vessels sailing nearby.

In Australia, a total of 16 ships, one submarine, 34 aircraft and 3000 personnel from 22 countries are carrying out the sea phase of the Royal Australian Navy led Exercise Kakadu 2022 in the waters and airspace of the Northern Australian Exercise area. The exercise is being held from Sept. 12-24 and encompassed both warfare and maritime enforcement training. Countries involved in the exercise are Australia, Brunei, Chile, Cook Islands, Fiji, France, Germany, India, Indonesia, Japan, Republic of Korea, Malaysia, New Zealand, Pakistan, Palau, Philippines, Samoa, Singapore, Solomon Islands, Thailand, Timor Leste, the United Kingdom, the United Arab Emirates, the U.S. and Vanuatu.

Along with Royal Australian Air Force (RAAF) P-8 Poseidon MPAs and Hawk fighter trainers, an Indian Navy P-8I Poseidon MPA and s U.S Navy P-8 Poseidon MPA is also taking part in the exercise while the German Air Force and Republic of Singapore Air Force (RSAF) contingents, which were in Australia for the RAAF Pitch Black exercise held from Aug.19 through Sept. 8 have stayed on to participate in Kakadu. The German Air Force contingent comprises of six Eurofighter Typhoons, three A330 Multi-Role Tanker Transports (MRTT), and an A400M transport while the RSAF contingent comprises of 8 F-15SG and 8 F-16D fighters, a Gulfstream 550 airborne early warning aircraft and a A330 MRTT.