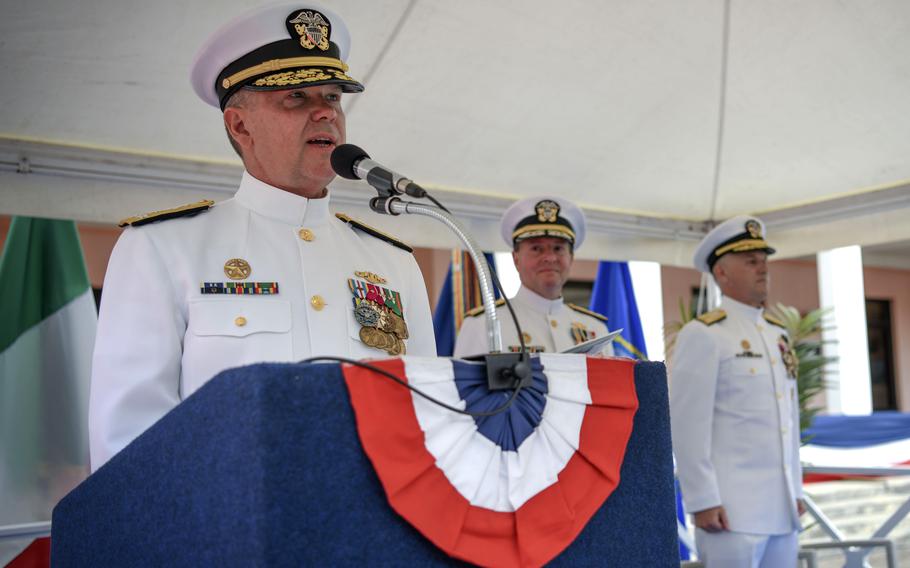 Ishee, who most recently served as director of global operations for U.S. Strategic Command, was tapped for 6th Fleet commander in May, when he was also nominated by President Joe Biden for vice admiral rank.

He commissioned into the Navy in 1988 after attending Officer Candidate School in Newport, Rhode Island, according to his Navy biography. His previous tours include USS Narwhal (SSN-671), USS Sea Devil (SSN-664) and USS Tunny (SSN-682). He served as the executive officer for USS La Jolla (SSN-701) and commanded USS Key West (SSN-722).

As 6th Fleet commander, Ishee will also lead Naval Striking and Support Forces NATO. He assumes command as the Russian invasion into Ukraine stretches into its seventh month. It is on the forefront of his mind, Ishee said, as he comes back to Naples.

“History is unfolding before our eyes, and our nation, the Alliance, other allies and our partners around the world are relying on 6th Fleet and Strike Force NATO to maintain freedom of navigation, defend our nations in the alliance and support our partners,” he said.

Adm. Stuart Munsch, commander of U.S. Naval Forces Europe-Africa and commander of Allied Joint Force Command Naples, spoke at the change of command ceremony held at Naval Support Activity Naples, Italy, and highlighted Ishee’s previous experience that he will bring to the role.

“Tom is the right leader at the right time to take the reins from Gene,” Munsch said.

He offered advice to both Ishee and Black, telling them to stand their ground when they know they are right.

Black, who served in the command for more than two years, will head to Washington, D.C., as deputy chief of naval operations for operations, plans and strategy, N3/N5. Biden nominated him for the position back in April.

During his time as the 6th Fleet commander, Black saw an increased level of activity after Russia invaded Ukraine, Munsch said. During Black’s time in charge, he oversaw a more visible maritime presence in the Mediterranean and Black Sea, the transition of USS Harry S. Truman (CVN-75) to NATO control and strengthened African partnerships.

“At every opportunity, Gene has sought to advance our warfighting advantage,” Munsch said.

Black assumed command of 6th Fleet as the COVID-19 pandemic raged, especially in Italy, he said. The changing regulations made it difficult to bring new sailors and Marines into the country. He oversaw a streamlining of the arrival process in order to address the quarantine periods and the travel woes.

As he entered his last months, Black said he watched as Russia invaded Ukraine. He worried that the Navy would be stretched thin.

“My concerns were misplaced,” he said. “The unity, power and trust displayed among NATO allies in the maritime [domain] soon became apparent as 165 ships and 21 submarines put to sea largely without signal and every single Russian ship quickly had an escort or two or more, no matter where they [were]. Ships across the alliance came together to establish communications, provided logistics, coordinated helicopter operations and filled in gaps for one another.”

Black called the 6th Fleet commander role the toughest job he had, saying that Ishee will experience both the highs and lows as he assumes the command.

“Know I am your strongest supporter and will help you in every way I can,” Black said. “And keep your powder dry and your sword sharp.”