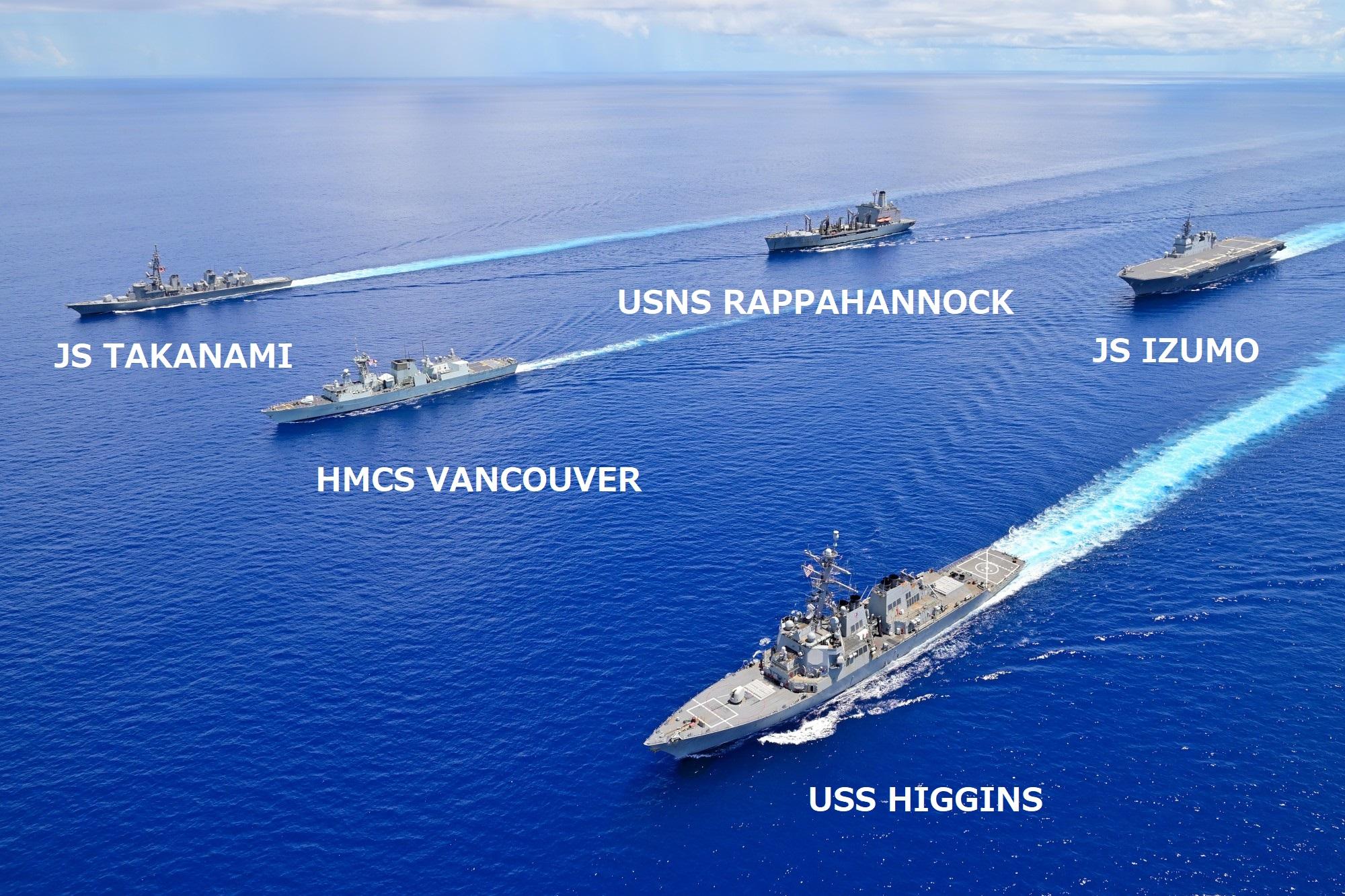 Japan, Canada and the United States wrapped up Noble Raven 22 this week, an exercise that took place in the waters from Guam to the South China Sea, according to a Japan Maritime Self-Defense Force news release.

Izumo and Takanami form the first surface unit of the JMSDF’s Indo-Pacific Deployment 2022 (IPD22), a a four-month deployment throughout the Indo-Pacific region from June 13 to Oct. 28.
“Through increased practical exercise, we improved tactical capabilities and interoperability between the JMSDF, the U.S. Navy and the Royal Canadian Navy, and we promoted cooperative relationship of Japan-U.S.-Canadian naval forces in order to realize a Free and Open Indo-Pacific,” Rear Adm. Toshiyuki Hirata, the commander of the first surface unit, said in the news release.

Vancouver together with sister ship HMCS Winnipeg (FFH338) are on a deployment to the region following their participation in the Rim of the Pacific 2022 exercise, which ended on Aug. 4. Winnipeg is now conducting Operation Projection, in which the Canadian Armed Forces conduct port visits, training, exercises and engagements with foreign navies and other international security partners in the region. Winnipeg is currently in Singapore, having docked there on Tuesday for a week-long port call and maintenance. Meanwhile, Vancouver is conducting both Operation Projection and Operation Neon – Canada’s contribution to a coordinated multinational effort to support United Nations Security Council sanctions imposed on North Korea. Canada’s participation includes surveillance and monitoring any ships that break the U.N. sanctions.

In other developments, amphibious assault ship USS Tripoli (LHA-7) is now back operating in the South China Sea, according to U.S. Defense Department imagery. Tripoli is scheduled to take part in an amphibious exercise in Japan with the JMSDF from Sept. 16-19, according to a Thursday news release from the JMSDF. The JMSDF and U.S. Navy will conduct a bilateral exercise in the waters around Japan and at the Numazu Beach training area, Honshu, the release said. The exercise participants will include Tripoli, landing ship dock USS Rushmore (LSD-47) and landing ship tank JS Osumi (LST-4001). The drills will involve both a beaching exercise and a search and rescue exercise. 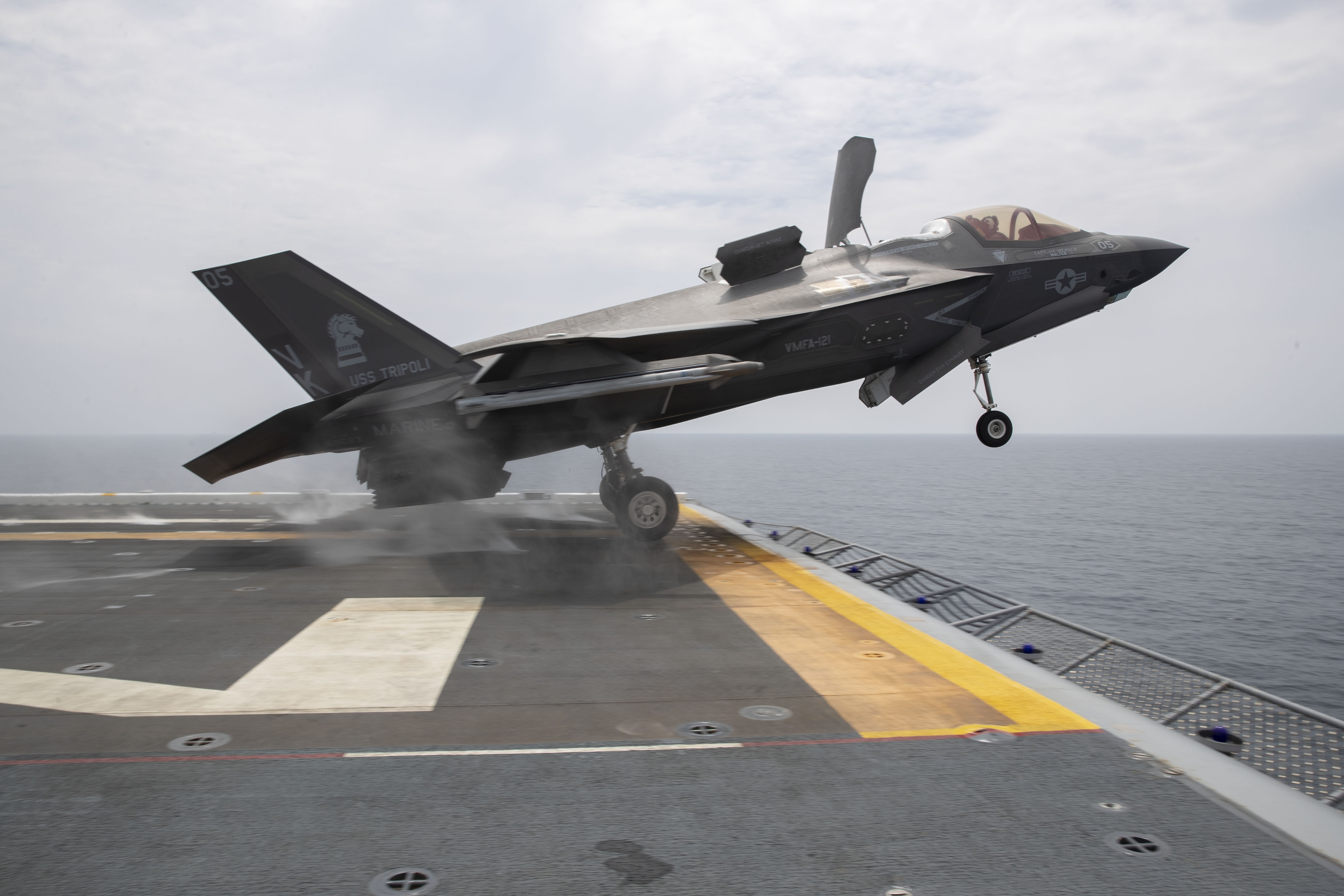 On Friday, the Joint Staff Office of Japan’s Ministry of Defense issued a news release detailing the sighting of a Russian destroyer in the Sea of Japan on Thursday at 11 a.m. local time. The hull number and image provided corresponds to destroyer RFS Marshal Shaposhnikov (543). The destroyer then sailed east through La Pérouse Strait on Friday, according to the release, which said JMSDF fast attack craft JS Kumataka (PG-827) and JMSDF P-3C Orions Maritime Patrol Aircraft of Fleet Air Wing 2 stationed at JMSDF Hachinohe Air Base, Honshu shadowed the Russian ship.

The deployments are part of the Oceania Maritime Support Initiative (OMSI), an effort led by the U.S. Secretary of Defense to better maritime security in the region.

“The joint Navy and Coast Guard OMSI mission capitalizes on the agility and mission adaptability LCS was designed for,” Cmdr. Derek Jaskowiak, the commanding officer of Oakland, said in the release. “It is our privilege to support our partner nations through presence in Oceania and to ensure continued security, stability, and prosperity throughout the region”.

Oakland finished its OMSI patrol in late August and Jackson will remain on station for the rest of this month. Jackson has been deployed in the Indo-Pacific region since July 2021, while Oakland only recently deployed this August, replacing USS Tulsa (LCS-16). Tulsa returned to San Diego on July 30. The third LCS in the Indo-Pacific, USS Charleston (LCS-18) – which arrived in the region in May last year – was in Singapore on Sept. 2 and hosted the change of command ceremony for Destroyer Squadron 7 (DESRON7).

The U.S. Navy this week announced that a destroyer and a submarine have recently returned home from deployments to the Indo-Pacific. On Tuesday, the service announced the return of destroyer USS Momsen (DDG-92) to its homeport of Naval Station Everett Washington following a seven-month deployment to U.S. 3rd, 5th, and 7th Fleets. 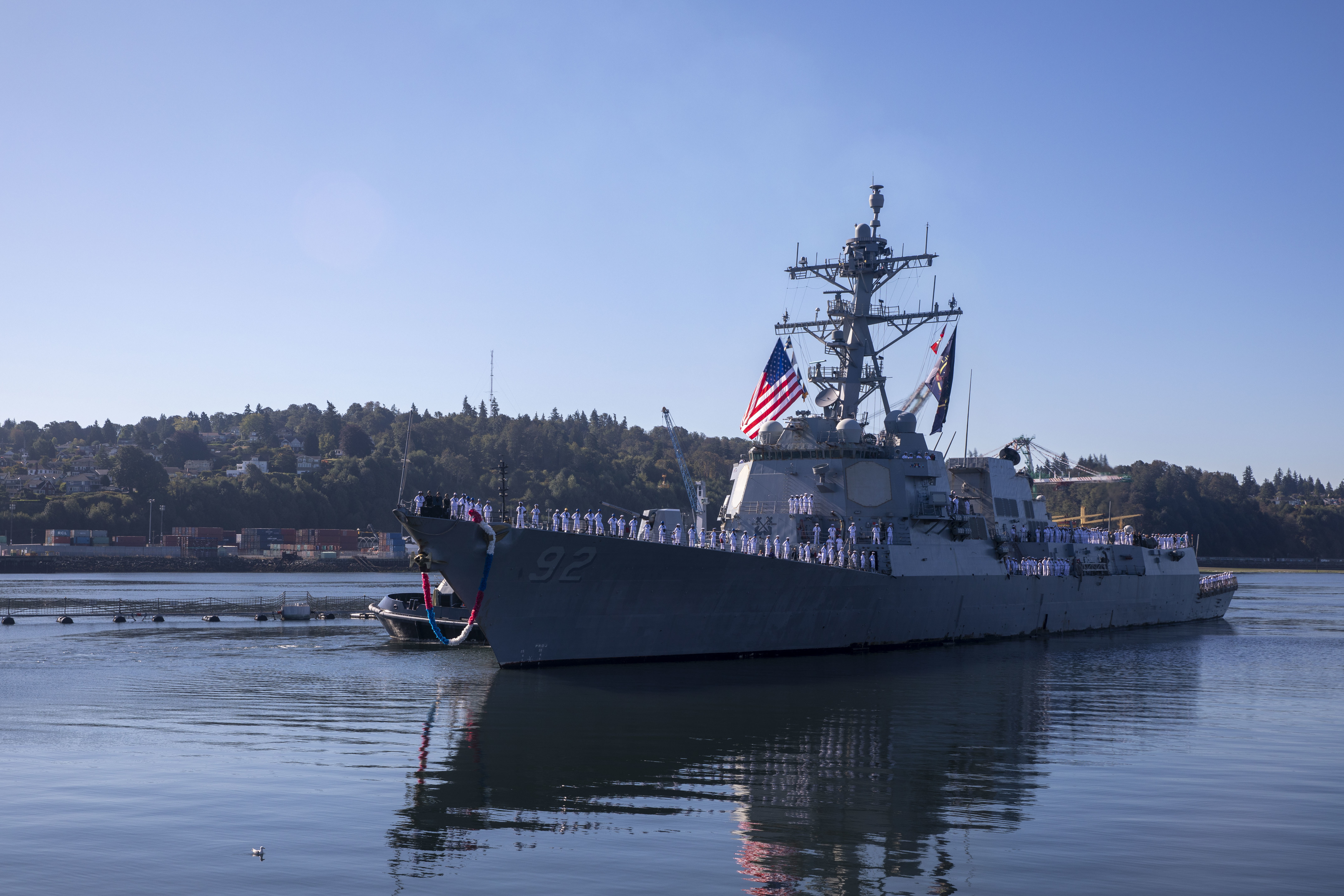 While operating in 5th Fleet, Momsen took part in Iron Defender 2022, an exercise that takes place each year between the United Arab Emirates and U.S. Naval Forces Central Command.

“While operating in support of Combined Task Force (CTF) 150 counter-narcotics operations, Momsen worked in coordination with the U.S. Coast Guard, seizing 640 kilograms of methamphetamine worth $39 million from a fishing vessel while patrolling international waters in the Gulf of Oman,” the release reads.

On Thursday, the Navy announced that submarine USS Scranton (SSN-756) returned to Naval Base Point Loma, San Diego on Wednesday following a seven-month deployment to the Western Pacific.

“Our time on deployment proved the submarine force is the most flexible deterrent available to our strategic planners against near peer competitors,” Cmdr. Michael McGuire, Scranton’s commanding officer, said in the news release, “Scranton benefited greatly from the adaptive planning based on the dynamic operations in 7th Fleet. I can say without a doubt that the officers, chiefs and ship’s crew are better prepared to continue to defend our great nation.”

Scranton traveled about 50,000 nautical miles while out on the deployment and stopped in Yokosuka, Okinawa and Guam, according to the release.