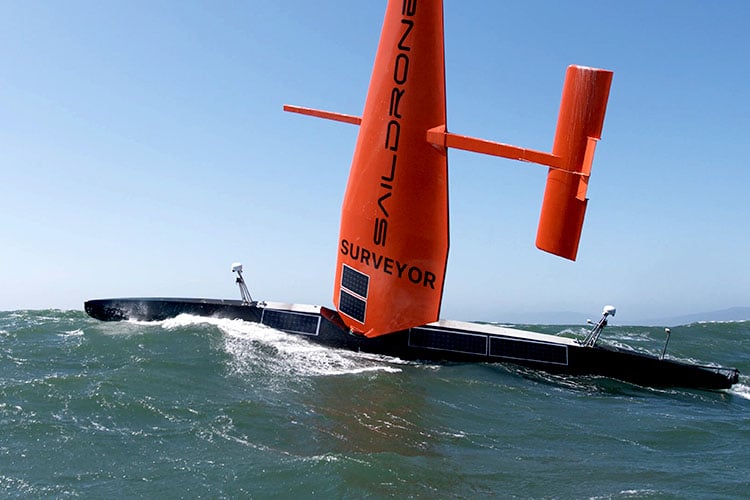 By the end of the year, Austal USA’s yard will start producing sail-powered, unmanned surface vessels for the Navy and other customers, the company announced this week.

Starting in October, the Mobile, Ala., shipyard will start building the 65-foot aluminum Saildrone Surveyor drones in its modular manufacturing facility for use by the U.S. Navy.

“The Saildrone Surveyor … is designed specifically for deep ocean mapping and intelligence, surveillance and reconnaissance applications, both above and below the surface,” reads a Wednesday statement from Austal USA.

Powered by wind and solar power, Saildrones are designed for high endurance voyages, originally for maritime research applications. But the Navy has been using them as surveillance platforms in U.S. Central Command since late last year as part of U.S. 5th Fleet’s Combined Task Force 59.

“We use the wind to sail these around, primarily collecting ocean data, atmospheric and oceanographic observations, but we can also put a payload in the keel and do things like fisheries surveys or single-beam mapping,” Brian Connon, Saildrone’s vice president of ocean mapping, told USNI News last year at the Navy League’s annual Sea-Air-Space symposium.

The long endurance of Saildrones as part of the testing in CENTCOM is one of the ways the Navy is developing its future fleet of unmanned systems that will provide the surveillance information for the Navy’s nascent distributed maritime operations concept.

The Navy announced earlier this year it had a notional plan to acquire 150 USVs in its latest long-range fleet structure. Yards like Austal and smaller shipbuilders in the Gulf Coast are looking to the smaller ships as part of the growth of the service’s unmanned fleet.

“To do a 70-foot autonomy ship was something not on our radar a couple of years ago but what you’ll see is the yard is agnostic … [Austal USA] is, able to build 70-foot ships or 700-foot ships. That’s the range of shipbuilding that we have going on as booked business right now and we’re going to continue to keep that wide range as long as it meets the needs of our customers and supports the yard’s ability to do high volume,” Murdaugh told USNI News.
“We’ve changed the way we manage the business from hulls to platforms. And so the panel can handle eight to 10 different platforms going through it at once. It has a lot of capacity. And we have growth plans that go out 50 years so that we can double the panel line.”