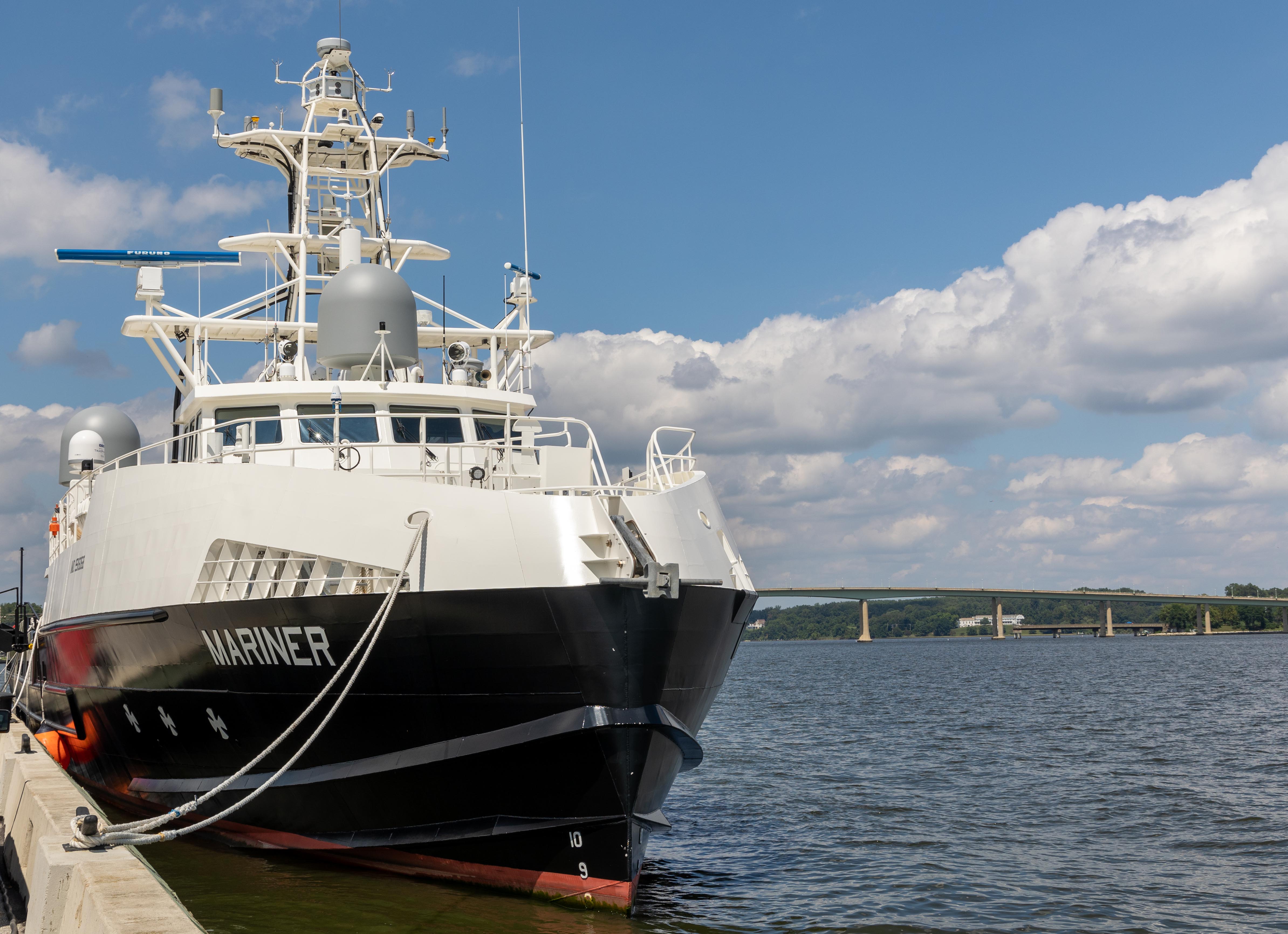 ABOARD OVERLORD USV MARINER IN ANNAPOLIS, MD., – In a small ceremony on Tuesday, the Navy christened its latest Ghost Fleet Overlord unmanned surface vehicle, putting the service on a path to ramp up autonomy experimentation with its fleet of USVs.

Mariner, which Gulf Craft built on spec at its Franklin, La., facility under prime contractor Leidos, will help the Navy advance testing for the autonomous technology needed for USVs. It will also add to the wide array of commercial systems – like sensors, satellite links, radars and communications suites – that the Navy is experimenting with across its fleet of USVs.

“Besides this platform doing a lot of work in … allowing us to test and mature basically our system engineering pillars – which are really applicable to no matter what we built, whether it’s [Large Unmanned Surface Vehicle] or MUSVs or something else – a lot of the basics here, the perception and the autonomy, the reliable machinery, almost all of that can cross over between those classes. The real differences are the size of the engines,” Rear Adm. Casey Moton, the program executive officer for unmanned and small combatants, told reporters on Tuesday.

“This baseline of what we’re doing first I want to say is really applicable to whatever approach we go. In terms of requirements, LUSV clearly is a program of record requirement, the [vertical launch system] capability – adjunct magazine capability – is important. It’s in our request. That’s really a big aim of what we’re developing,” he added.

The basic design of Mariner is similar to other craft on the Gulf Coast used to support oil rigs and was half-way built when the Navy purchased it, according to Brian Fitzpatrick, the principal assistant program manager for USV’s at the Naval Sea Systems Command’s unmanned maritime systems program office, or PMS 406.

The 194-foot long Mariner is also equipped with datalinks and systems to function as a mothership for other USVs, making it easier for the Navy to now experiment with multiple unmanned craft at the same time.

“Now we can take two of our USVs and go out and do multi-vessel [operations] and control and not necessarily have to take a DDG off of actual fleet operations to go to that,” Moton said. “It gives us that ability to just get there that much more quickly through the testing and the different scenarios.”

Mariner also features the command and control portions of the Aegis combat system and can link to other Aegis ships in the fleet. The Navy added a third electrical generator, on top of the two generators in the original design for redundancy and the aft part of the USV can fit containerized payloads. The convertible mission area can accommodate two 20-foot payloads in the front and either four 40-foot payloads or eight 20-food payloads in the back.

Mariner will head to the West Coast to join the Navy’s other MUSVs under San Diego, Calif.,-based Unmanned Surface Vessel Division One in Fiscal Year 2023.

Moton said that while the goal is to have Mariner perform long transoceanic transits, the Navy still needs to figure out the refueling piece for USVs.

“We actually have some [science and technology] work going on into how to do like a stern refueling while it’s unmanned. But for now, when we’re going to refuel the vessel, we actually put humans aboard and we refuel it because it’s a complex operation,” Moton said.

While the service currently refuels the USVs with humans aboard, it plans to do a refueling test next year to see how it can function without a human in the loop.

“We have to go through the not just the getting people onboard and doing it with the USV, but also us working with the oiler and how many people do we need to do that from a [concept of operations] development standpoint,” Fitzpatrick said.

Mariner is the fourth MUSV that’s part of the Ghost Fleet Overlord effort but the third to deliver to the Navy. The third USV, Vanguard, is under construction at Austal USA under prime contractor L3Harris Technologies.

Vanguard will be 205 feet long and Austal USA is building the hull to commercial standards, Fitzpatrick said. The additional length will allow Vanguard to carry more fuel and heavier payloads.

“The extra length – and it’s actually deeper – so it’s deeper, it’s wider and it’s longer. So lots more volume so we can get more fuel onboard. We can also carry more payloads, not necessarily the size, the length of the payload, but the weight of the payload,” Fitzpatrick said.

The Navy just wrapped up fleet-wide experimentation with the four MUSVs under USVDIV that participated in the biennial Rim of the Pacific 2022 exercise. Ghost Fleet Overlord test ships Nomad and Ranger, the Defense Advanced Research Projects Agency-developed Sea Hunter and its sister ship, Seahawk were each pairs with a single destroyer during RIMPAC.

Fitzpatrick said the RIMPAC experimentation yielded 400 terabytes of data that the Navy will spend the next few months combing through to filter what data it needs.

“We’ve been standing up pipelines to bring that data in to be able to do automated processing of that,” he said.

“Right now, it’s collect everything we can. Collect everything we can. There’s a certain amount from a [Convention on the International Regulations for Preventing Collisions at Sea] side and [hull, mechanical and electrical] side that we know we want to collect,” Fitzpatrick continued. “But right now we’re pulling everything and then it’s got to set the pipeline up to make that not a two or three month evolution, but a couple days.”