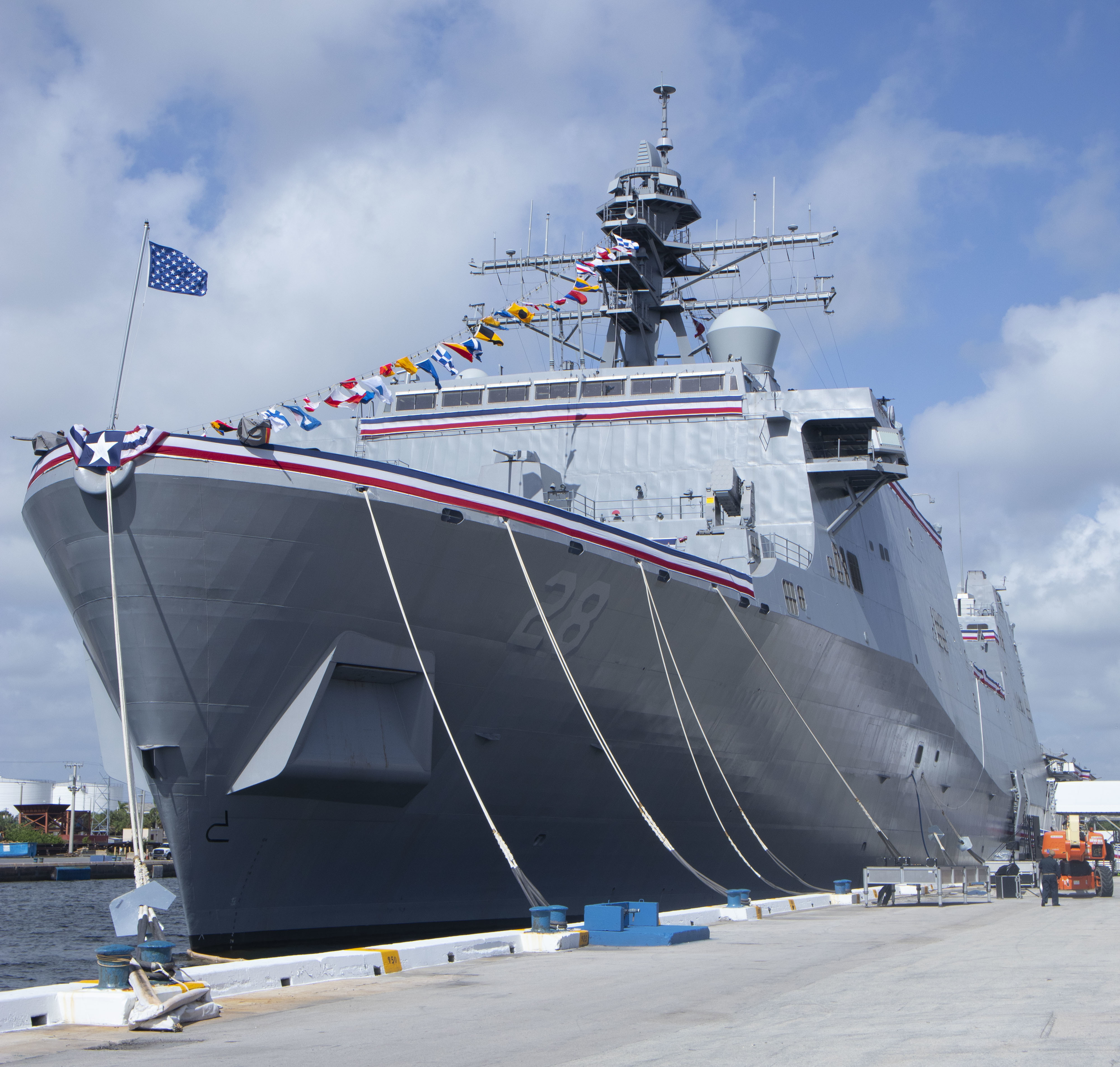 The 12th San Antonio-class amphibious warship formally entered service on Saturday in a ceremony in Florida.

USS Fort Lauderdale (LPD-28) is the first LPD-17 commissioned beyond the original 11 LPD-17s envisioned for the class. Fort Lauderdale serves as the bridge between the current class and the Flight II San Antonios that will replace the Whidbey Island and Harpers Ferry amphibious warships (LSD-41/49).

Fort Lauderdale delivered to the Navy in March from HII’s Ingalls Shipbuilding, according to the service. The ship’s sponsor is Assistant Secretary of the Navy for Energy, Installations & Environment Meredith Berger. Fort Lauderdale will be homeported at Naval Station Norfolk, Va.

In his remarks at the ceremony, Marine Corps Assistant Commandant Gen. Eric Smith referenced the ongoing push from the service to acquire more of the San Antonio amphibs. The Marines have made a public call for a minimum of 31 amphibious warships in the Navy’s inventory – 10 big-deck amphibious warships and a combination of 21 San Antonios and Whidbey Island ships for the service’s new Force Design 2030 battle plan.

“We fight so hard for these ships, because we have to fight from these ships,” he said in his speech.
“When [Fort Lauderdale is] fully ready to go, you’ll see attack helicopters, you’ll see assault support helicopters, you’ll see Landing Craft Air Cushion, you’ll see Landing Craft Utility, High Mobility Artillery Rocket systems. You’ll see intelligence operators, you’ll see the ability to do everything that this ship needs to do. It is the Swiss Army knife of the fleet. It’s highly sought after. It is a national strategic asset that will be on the water for 40 years. It’s a Navy and Marine Corps asset … it’s a national asset.”

In his speech, Secretary of the Navy Carlos Del Toro highlighted the European deployment of the Kearsarge Amphibious Ready Group with the 22nd Marine Expeditionary Unit embarked as an example of the amphibious force in action.

“Our amphibious platforms, these ships, indeed send a strong message to our friends and our potential adversaries, that we are prepared to always maintain the peace and respond with forest from the sea when needed,” he said.
“The performance of … the Kearsarge, [USS Gunston Hall (LSD-44)] in the Baltic, operating with our allies is one force spoke louder than ever regarding our commitment to NATO, and our partner nations in Europe and elsewhere.”

“In addition to LPD-28, HII’s Ingalls Shipbuilding Division is currently in production on the future USS Richard S. McCool (LPD-29) and the future USS Harrisburg (LPD-30), with start of fabrication for future USS Pittsburgh (LPD-31) planned for later this spring,” the Navy said in a statement.

Fort Lauderdale will be the first San Antonio without the distinctive composite mast of the previous 11 ships. The masts, along with the deck houses for the first two Zumwalt-class, were built at HII’s composite facility in Gulfport, Miss., which closed in 2014.