On July 22, a PLAN corvette was sighted sailing about 50 miles west of Uotsuri Islands, part of the Senkaku Islands, according to the Japanese Self-Defense Force. Subsequently, the corvette sailed south between Yonaguni Island, which is part of the Yaeyama Islands, and Taiwan into the Pacific Ocean.

On Wednesday, the corvette was sighted 44 miles west of Uotsuri Island and sailing northward. The PLAN ship subsequently sailed into the East China Sea.

The Senkaku Islands are administered by Japan, but both China and Taiwan claim the islands. Japan has raised concerns about PLAN activities near the islands.

China, however, claims that its activities around the islands, which it calls the Diaoyu Islands, are lawful. During a Thursday press briefing at the Ministry of National Defense, Senior Col. Wu Qian, a spokesperson for China’s Ministry of National Defense said Japan’s claims were “irresponsible,” and the PLAN activities in the waters around the Diaoyu Islands were legal and legitimate.

“We urge the Japanese side to stop all provocative actions, manage differences through dialogue and consultation, and avoid causing unexpected maritime accidents,” he said. 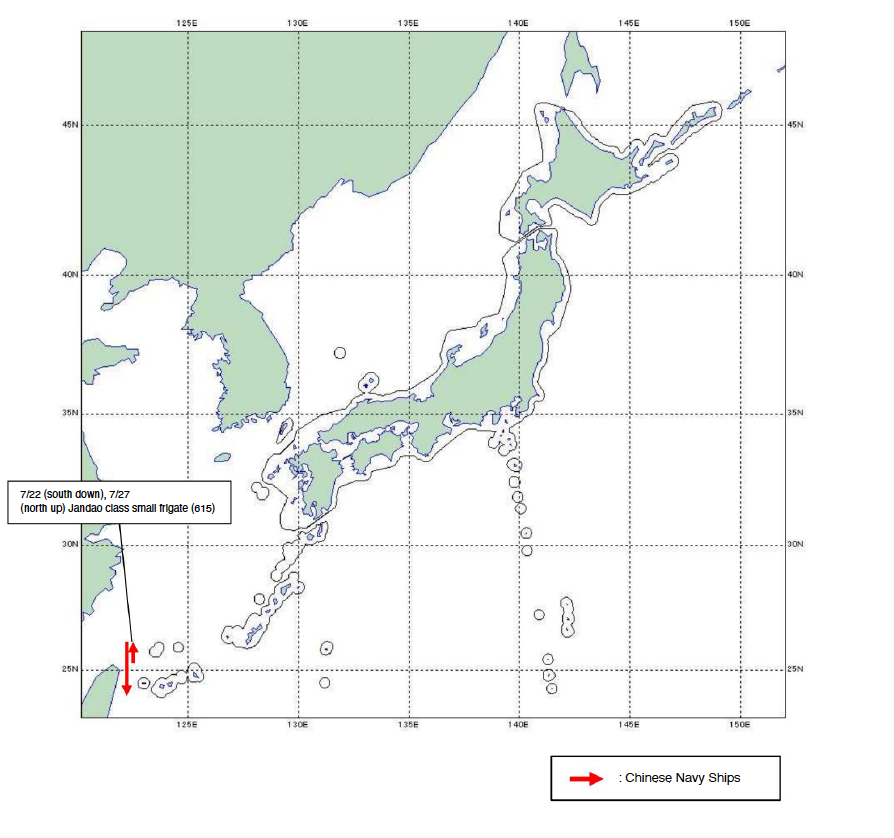 Also on Thursday, two PLAN Shupang class hydrographic survey vessels carrying pennant numbers 23 and 25 were sighted traveling northeast in an area 150 miles northwest of Yokoate Island, which is part of the Tokara Islands group. Subsequently, the ships sailed northeast through the Osumi Strait into the Pacific Ocean.

On Friday, a Shupang class hydrographic survey vessel carrying pennant number 22 was sighted moving northeast in an area 25 miles west of Tsushima and subsequently sailed northeast through the Tsushima Strait and into the Sea of Japan. The PLAN ship was monitored by JMSDF P-1 MPAs of Fleet Air Wing 1 based at JMSDF Kanoya Air Base, Kyushu and Fleet Air Wing 4 based at Naval Air Facility Atsugi, Honshu.

The United States has not sent any ships near Taiwan ahead of Speaker of the House Rep. Nancy Pelosi’s (D-Calif.) trip to Asia, a senior military official told reporters Friday, referring further questions to the State Department. It is unclear if Pelosi will visit Taiwan.

A Global Times columnist Hu Xijin tweeted that if the U.S. sends fighter jets to accompany Pelosi’s plane, it would be seen as an invasion.

“The will of the people cannot be defied and those who play with fire will perish by it,” Xi allegedly told Biden, according to the article. 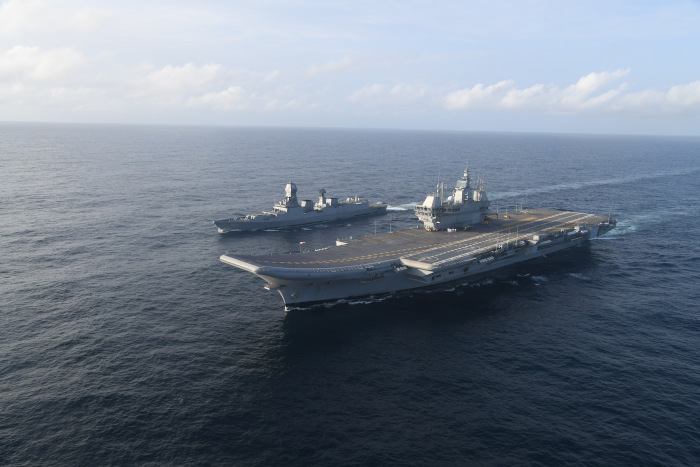 The 286-yard-long carrier has a full displacement of close to 45,000 tonnes, and Vikrant is capable of operating an air wing consisting of 30 aircraft comprising of MIG-29K fighter jets, Kamov-31 and MH-60R helicopters, in addition to the indigenously manufactured Dhruv- Advanced Light Helicopters (ALH) and naval version of the Tejas Light Combat Aircraft (LCA) stated an Indian Navy release.

Vikrant uses a ski jump for launching aircraft and is expected to be commissioned next month.

An Indian Navy release that day stated that a third MH-60R will delivered in August 2022. The Indian Navy already has previously taken delivery of three MH-60Rs in the United States, which are being used to train Indian Navy crews there. India ordered in 2020 a total of 24 MH-60Rs with delivery of all helicopters to be completed by 2025.

USNI News reporter Heather Mongilio contributed to the reporting of this article.