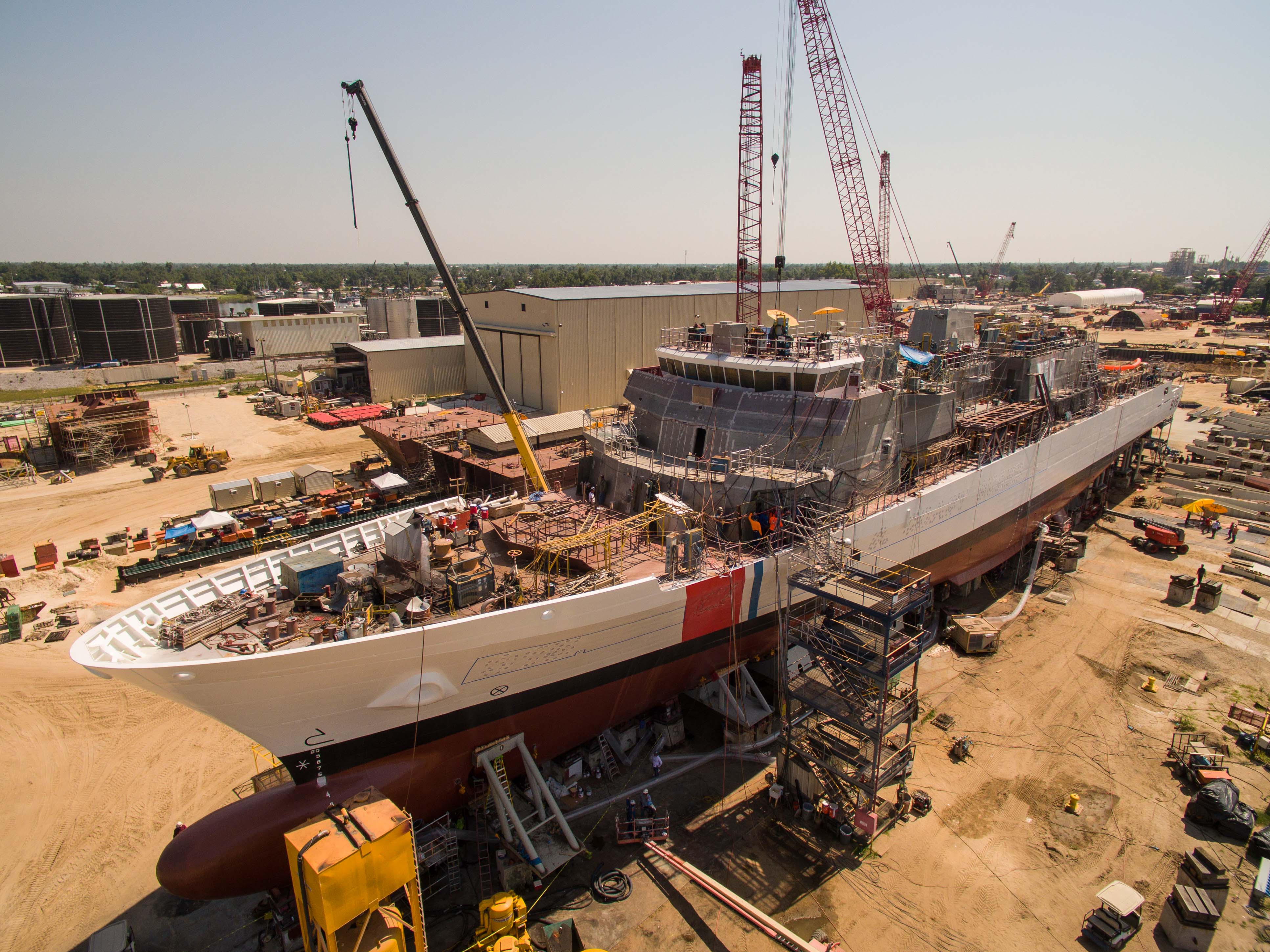 This story has been updated on with additional information from Austal USA and HII.

The shipyard first tapped to build what the Coast Guard considers its most important shipbuilding program is contesting the service’s decision to change yards with a formal protest to the Government Accountability Office, company officials told USNI News.

Eastern Shipbuilding Group filed the GAO protest following the late June $208.26 million award to Austal USA in Mobile, Ala., to build the future Heritage-class Offshore Patrol Cutters. The Coast Guard decided to recompete the program in 2019 after Eastern failed to meet production schedules due in part to damage the yard suffered during a 2018 hurricane. Eastern is under contract to build the first four cutters.

Austal is best known for aluminum ship construction – building the Navy’s Independence-class Littoral Combat Ships and Spearhead-class Expeditionary Fast Transports. The OPC cutters would be one of the first on Austal’s new steel ship line. The company said it has already cut steel for the Navy’s T-ATS Navajo-class towing, salvage and rescue ships.

In its protest, reviewed by USNI News, Eastern says Austal overstated its ability to produce the OPC and that the Coast Guard did not follow its own criteria in awarding the Mobile yard the potential $3.3 billion contract for 11 of the OPCs – the fifth through the eleventh in the class. The complaint also alleged Austal had an unfair competitive advantage due to leaked pricing information and that the Mobile yard employed a former Coast Guard officer who would have non-public information on the OPC program.

“Our decision to protest does not come lightly. Our community is left reeling from the decision to abandon our workforce and move the Coast Guard’s largest acquisition program from our successful production line to a high-risk situation,” Eastern president Joey D’Isernia said in a statement provided to USNI News.
“While this process plays out, we remain committed to our USCG partners and delivering shipbuilding excellence on the first four hulls.”

The Coast Guard is slated to purchase 25 of the OPCs as a replacement to its fleet of 29 Famous and Reliance classes of medium endurance cutters. The 4,250-ton Heritage-class cutters will be the backbone of the Coast Guard’s fleet, former Coast Guard commandant Adm. Karl Schultz said earlier this year.

Austal said in a Wednesday statement to USNI News, “we are confident in the integrity of the solicitation process and that the United States Coast Guard’s selection of Austal USA as the Stage II OPC shipbuilder will be upheld. We will remain focused on delivering world-class ships to our customers.”

HII’s Ingalls shipbuilding in Pascagoula, Miss., also submitted a bid for the OPC contract as a follow on to its Legend-class National Security Cutter work.

“We are disappointed in the OPC decision, however Ingalls remains focused on and committed to serving the Coast Guard on the National Security Cutters we are currently building,” HII said in a statement.

The Coast Guard acknowledged a request for comment from USNI News but did not immediately provide a response.

Prior to the OPC work, Eastern had been a commercial shipbuilder known for building offshore oil and industry vessels and tugs. The OPC award is the company’s first federal contract.