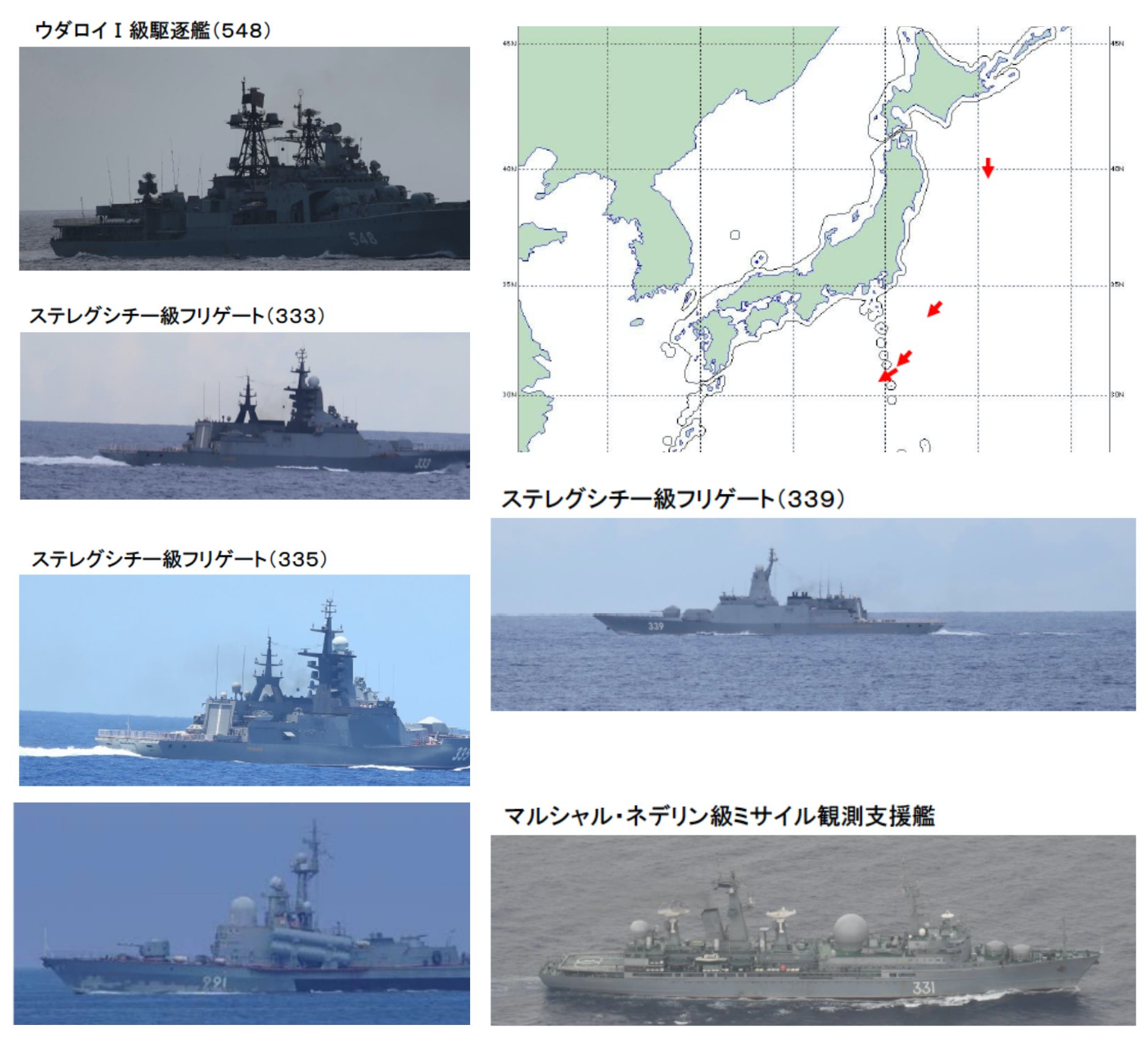 Russian warships are now steaming in the East China and the Philippine seas near Japan, the Russian Navy and the Japan Defense Ministry announced on Monday.

Meanwhile, the Japan Maritime Self Defense Force (JMSDF) Indo-Pacific Deployment 2022 (IPD22) drilled with the U.S. Navy while ships from five Indo-Pacific nations sailed together out of Guam en route to the Rim of the Pacific 2022 (RIMPAC2022) exercise in Hawaii.

The Russian Navy said destroyers RFS Marshal Shaposhnikov (543) and RFS Admiral Panteleyev (548) and the missile range instrumentation ship RFS Marshal Krylov were underway with accompanying corvettes had operated replenishment ship Pechenga in the Philippine Sea. The release added that the ships practiced joint maneuvering in the region with air defense, submarine search and cooperation with the aircraft of the Pacific Fleet. Earlier on Friday, the Russians said a detachment of the Russian Pacific Fleet had entered the Philippine Sea and was engaging in anti-aircraft training as well as searching for mock enemy submarines.

The movements of Russian, as well as Chinese warships around Japan, have been observed by the Japanese Ministry of Defense, with the Ministry’s Joint Staff Office issuing releases. On Friday, the JSO issued a release stating the sighting of five Russian ships comprising of a destroyer and four corvettes on Thursday in the vicinity of the Izu Islands, with the ships subsequently sailing southwest between Smith Island and Torishima. Subsequently, on Friday, a Russian Navy destroyer together with Marshal Krylov was seen at in the same area moving southwest.

On Sunday, the JSO issued a release stating that five Russian ships were observed around Okinawa and sailed northwest through the Miyako Strait into the East China Sea. Hull numbers and images provided corresponded to Admiral Panteleyev, Sovershennyy, Gromkiy, Hero of the Russian Federation Aldar Tsydenzhapov and Marshal Krylov. Teruzuki and replenishment ship JS Tokiwa (AOE-423) together with a JMSDF P-3C Orion MPA of Fleet Air Wing 5 based at Naha Air Base monitored the Russian ships.

On Sunday, three People’s Liberation Army Navy ships were sighted sailing south in the sea area about 137 miles east of Mt. Jinhua, Miyagi Prefecture, hull numbers and images provided identified the ships as destroyers CNS Lhasa (102) and CNS Chengdu (120) and replenishment ship CNS Dongpinghu (902), according to Japanese officials. The PLAN ships were monitored by the destroyer JS Makinami (DD-112), the release also included details of the PLAN ships’ movement since their sighting on June 12 in the Tsushima Strait and the movement of a Dongdiao class surveillance ship with hull number 794 which has been on and off sailing in the vicinity of the group. Dongpinghu and Dongdiao 794 had sailed together through the Tsugaru Strait on An earlier JSO release on Friday stated that Lhasa and Chengdu were sighted on Thursday at noon sailing northeast in an area 230 km southwest of Rebun Island, Hokkaido and subsequently sailed east through La Pérouse Strait. The release stated that Wakataka and a JMSDF P-3C Orion of Fleet Air Wing 2 monitored the PLAN ships.

Meanwhile the JMSDF’s IPD22 deployment conducted its first engagement with JS Izumo (DDH-183) and destroyer JS Takanami (DD-110) having carried out an exercise with destroyer USS Sampson (DDG-102) and replenishment ship USNS Rappahannock (T-AO-204) in the Pacific Ocean from Friday to Sunday. IPD has been an annual deployment by the JMSDF since 2019 and IPD 2022 will involve two surface units, one comprising of Izumo and Takanami while a second surface unit comprises of the destroyer JS Kirisame (DD-104). An unnamed submarine will also be deployed.

In other developments, a multi-national sail exercise was held from Thursday to Saturday by ships of five Indo-Pacific navies who are sailing towards Hawaii for the Rim of the Pacific 2022 (RIMPAC 2022) exercise, set to be held in Hawaii from June 29 until August 4. The ships in the joint sail were the Indian Navy frigate INS Satpura (F48), Philippine Navy frigate BRP Antonio Luna (FF-151), Indonesian Navy frigate KRI I Gusti Ngurah Rai (332), Republic of Singapore Navy frigate RSS Intrepid (69) and Royal Malaysian Navy corvette KD Lekir (FSG26).