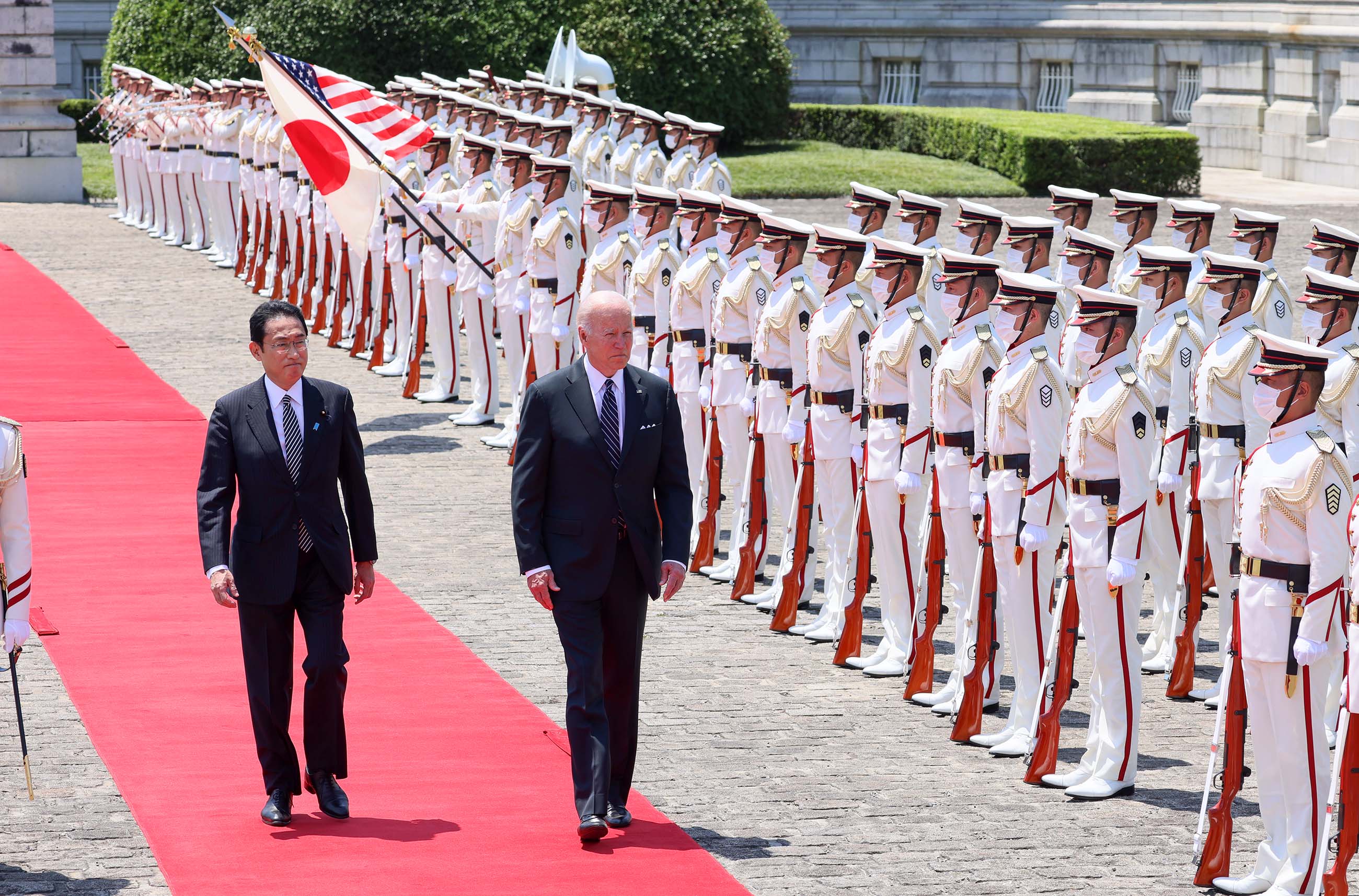 Japan Prime Minister Fumio Kishida unveiled his strategy for Japan’s role in the Indo-Pacific region during a Friday address at the International Institute for Strategic Studies Shangri-La Dialogue forum in Singapore.

Referring to it as the ‘Kishida vision for peace’, he said it would comprise five pillars of initiatives: maintaining and strengthening the rules-based free and open international order by bringing in new developments towards a free and open Indo-Pacific, enhancing security by advanced reinforcement of Japan’s defense capabilities in tandem with reinforcing the Japan-U.S alliance and strengthening security cooperation with other like-minded countries, promoting realistic efforts toward a world without nuclear weapons, strengthening the functions of the United Nations along with reform of the U.N. Security Council and finally, strengthening international cooperation in new policy areas such as economic security.

While Japan was committed to building a stable international order via dialogue and not confrontation, Kishida said it must be prepared for “the emergence of an entity that tramples on the peace and security of other countries by force or threat without honoring the rules.” He added that in order to prevent such situations, Japan must enhance its deterrence and response capabilities.

With the situation surrounding Japan becoming more severe, Kishida said the Japanese government will unveil a new National Security Strategy at the end of the year. He said he’s determined to reinforce Japan’s defense capabilities within the next five years and secure a substantial increase in the defense budget. Kishida also said Japan would not rule out any options, including obtaining counterstrike capabilities, though he stressed that Japan would not change its posture as a peace-loving nation and it will carry out any efforts in accordance with its constitution and international law.

Kishida criticized Russia for its invasion of Ukraine and reiterated Japan’s commitment to supporting Kyiv and the imposition of sanctions on Russia. He warned that the situation in Ukraine today could be East Asia tomorrow, a veiled swipe at China over its disputed claims in the region. He did not openly name China in his speech, but at the same time pointed to disputes in the East and South China seas, along with tensions over Taiwan. He said that in the East China Sea, unilateral attempts to change the status quo in violation of international law are continuing.

Kishida struck a more conciliatory tone in the question and answer session. In response to a question from People’s Liberation Army Lt. Gen. He Lei on Kishida’s vision of ties between Japan and China, Kishida said bilateral relations between the two countries were important not only for them, but also for the region and international community. Kishida called upon China to act responsibly and build a constructive relationship. He also pointed out North Korea’s repeated launch of ballistic missiles and efforts to strengthen its nuclear and missile activities in violation of U.N. Security Council resolutions. Kishida said those actions pose “a clear and serious challenge to the international community”.

During his speech, Kishida also spoke about Japan’s planned efforts to strengthen nations in the Indo-Pacific both in security and economic aspects. The security side will include transferring patrol boats in the region, strengthening regional maritime law enforcement capabilities and providing defense equipment and technology transfers. Singapore is one of the countries that will sign a defense equipment and technology transfer agreement with Japan.

Earlier on Friday, U.S. Defense Secretary Lloyd Austin met with Chinese Defense Minister Gen. Wei Fenghe to discuss the U.S.-China defense relations on the sidelines of the Shangri-La Dialogue. A Pentagon news release said the meeting was programmed for 30 minutes, but lasted just under an hour, in which Austin and Wei mostly talked about Taiwan. They also talked about Russia’s ongoing invasion of Ukraine, issues in Northeast Asia, and North Korea, according to the news release.

“Austin and Wei discussed the need for crisis communication between the two militaries. Austin urged China’s People’s Liberation Army to participate more proactively in crisis communications and crisis management mechanisms,” the U.S. Defense Department said in the release, with a senior U.S. defense official noting Wei “was responsive to that.”

China’s Ministry of National Defense issued a statement on the meeting, in which it said China hopes to establish a healthy and stable major-country relationship with the U.S. China said the U.S. must view China’s development and growth rationally, not attack and smear China, not try to contain and suppress China, not interfere in China’s internal affairs or harm China’s interests.

“Stable military-to-military relations are crucial to the development of bilateral relations, and the two militaries should avoid conflict and confrontation,” the statement said.

The Pentagon said that on Taiwan, “The secretary also read chapter and verse of the Taiwan Relations Act and stressed the part about the peace and stability in the Taiwan Strait ‘being of grave concern’ to the United States,” according to the U.S. defense official.

“Austin told Wei that the United States will continue to provide arms with defensive character to Taiwan as called for under the act. Also contained in the act is language that says ‘the United States will maintain the capacity to resist any resort to force that threatens the security of the people on Taiwan,'” the official continued in the release.

Wei Fenghe reiterated Beijing’s stance that Taiwan is a break-away province and that the basis of the U.S.-China relationship is rooted in the American “One-China” policy. Wei added that continued U.S. arms sales to Taipei, “damages China’s sovereignty and security interests,” according to a translation of the statement.

In other regional developments, Russian ships are operating in international waters in the vicinity of Japan based on news releases from the Joint Staff Office (JSO) of the Ministry of Defense. Russian surveillance ship RFS Pribaltica (80) was sighted sailing westward in an area 15 kilometers north of Cape Soya at 7 a.m. that day, according to a JSO news release issued Tuesday. The ship subsequently sailed eastwards through La Pérouse Strait. The release noted that Pribaltica had sailed west through La Pérouse Strait in May. A Japan Maritime Self-Defense Force P-3C Orion Maritime Patrol Aircraft (MPA) of Fleet Air Wing 2 based at JMSDF’s Hachinohe Air Base, Aomori, monitored the Russian ship.

Pribaltica sailed down south and was spotted on Thursday traveling southeast, about 90 kilometers south-southwest of Okushiri Island, Hokkaido, according to a JSO release issued that day. The release added that the ship then traveled through the Tsugaru Strait, which lies between Hokkaido and Honshu in the Pacific Ocean. JMSDF multipurpose support ship JS Suo (AMS-4302) and fast attack craft JS Wakataka (PG-825), along with a JMSDF P-3C Orion MPA of Fleet Air Wing 2 based at JMSDF’s Hachinohe Air Base, Aomori, monitored the Russian ship.

On Friday, the JSO issued another news release stating that on Thursday, a Russian Navy destroyer and four frigates were sighted operating in the waters about 170 kilometers southeast of the Nemuro Peninsula, Hokkaido. The ships were identified in the release by hull numbers corresponding to destroyer RFS Marshal Shaposhnikov and corvettes RFS Sovershennyy (333), RFS Gromkiy (335), RFS Gremyashchiy (337) and RFS Hero of the Russian Federation Aldar Tsydenzhapov (339). JMSDF destroyer JS Yudachi (DD-103) monitored the Russian ships, the release said.

The Russian Ministry of Defence has previously said the Russian Pacific Fleet would conduct a large-scale exercise involving more than 40 ships and about 20 aircraft in the Pacific Ocean and the waters around the Kuril Islands starting June 3, Japan Defense Minister Kishi Nobuo said in a Friday press conference. The Japan Defense Ministry believed the activities of the five ships were related to the exercise. Kishi said the Defense Ministry believes Russia is aiming to demonstrate its ability to operate simultaneously in the Far East, even during the invasion of Ukraine, and that Japan would continue to monitor these activities.