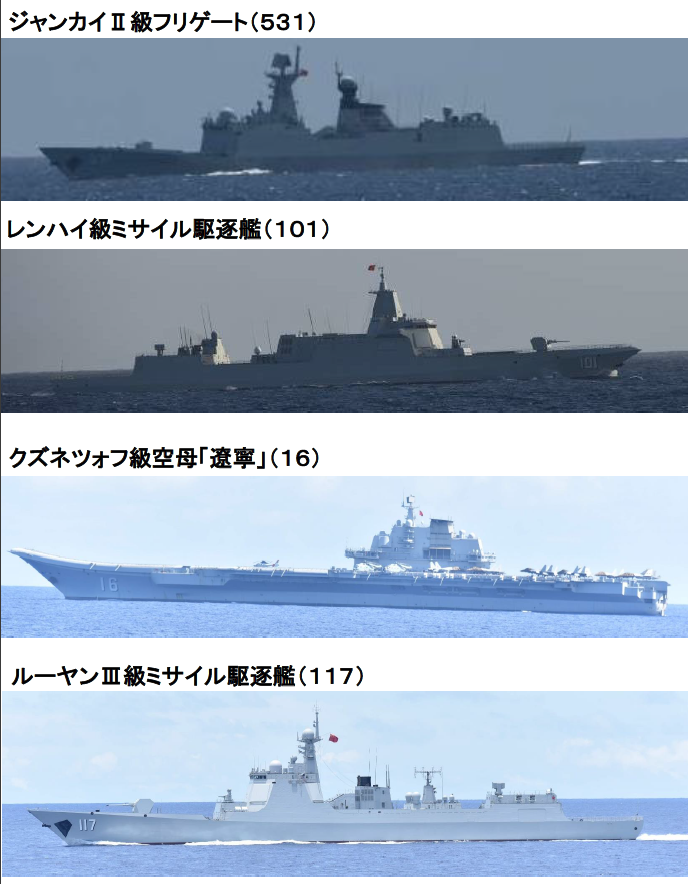 Ships from the Chinese Liaoning Carrier Strike Group on May 22, 2022. Japanese MoD Photo

China’s Liaoning Carrier Strike Group is now operating in the East China Sea after conducting drills in the Pacific Ocean and the Philippine Sea for more than two weeks, the Japan Ministry of Defense said over the weekend.

The majority of the group transited the Miyako Strait on Saturday, the Japanese government said in news releases on Friday and Saturday.

At 9 a.m. on Friday, a People’s Liberation Army Navy (PLAN) destroyer was sighted traveling northwest, about 110 kilometers northeast of Miyako Island, and subsequently sailed through the Miyako Strait into the East China Sea, the Joint Staff Office in Japan’s Ministry of Defense said in a news release. The JSO included a photo that only identified the ship by its pennant number, which corresponds to Zhengzhou. Japan Maritime Self-Defense Force support ship JS Amakusa (AMS-4303) and a JMSDF P-3C Orion Maritime Patrol Aircraft of Fleet Air Wing 5 based at Naha Airbase, Okinawa conducted surveillance on the PLAN ship, according to the JSO release.

On Saturday, a PLAN frigate was observed sailing northwest, about 170 kilometers east of Miyako Island, the JSO said in a separate news release on Sunday. The pennant number and image given identifies the ship as Xiangtan. Subsequently, at 3 p.m., a destroyer with a pennant number and image identifying it as Nanchang, was seen 180 kilometers east of Miyako Island, sailing west. Then, at 5 p.m., five ships with pennants and images corresponding to carrier Liaoning, destroyers Xining, Urumqi and Chengdu, and fast combat support ship Hulunhu were spotted. All seven ships then sailed together through the Miyako Strait into the East China Sea. 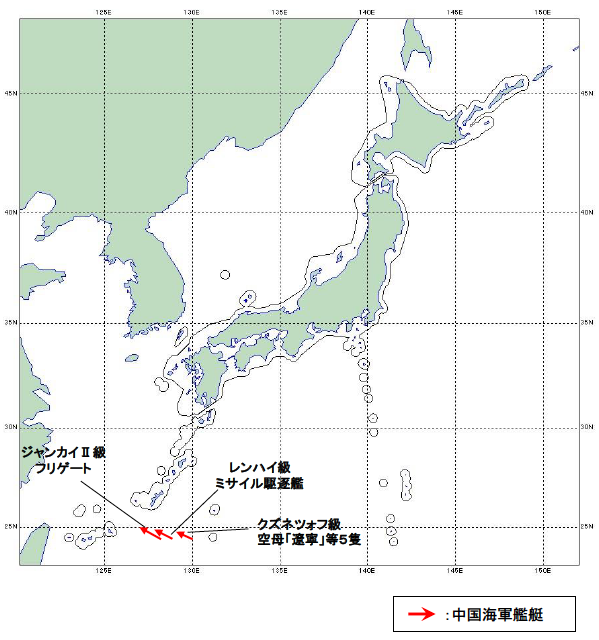 Chinese Liaoning Carrier Strike Group path to the East China Sea on May 22, 2022.

The Liaoning CSG sailed into the Pacific Ocean via the Miyako Strait on May 2 and has been conducting carrier flight operations in the Pacific Ocean and Philippine Sea since May 4. The seven ships accompanying Liaoning did not stay with the carrier throughout that period. Instead, several of the ships broke off and rejoined the carrier periodically while the carrier conducted flight operations, similar to the way United States carrier strike groups operate.

In other developments, on Sunday Japanese destroyer JS Harusame (DD-102) departed from Sasebo for the Gulf of Aden as the 42nd Deployment Surface for Counter Piracy Enforcement. It will relieve destroyer JS Samidare (DD-106), which is currently conducting the counter-piracy mission. Japan has been deploying JMSDF ships and aircraft to the region since 2009 to protect Japanese and foreign commercial ships in the Gulf of Aden.

“The Royal Thai Navy considers this exercise very valuable in developing knowledge, competency, and experience for its own personnel,” Vice Adm. Pisal Meesri, the deputy Commander-in-Chief of the Royal Thai Fleet, said in the news release. “I am confident that all participating forces will benefit from the professional sharing, field practice, and sea-phase training.”

The two navies will carry out multiple engagements, including tactics that will hone communications between the two navies.

“The exercise includes maritime domain awareness tracking with a P-8 aimed at increasing both navies’ ability to track and pursue targets beyond visual range, and both navies practiced helicopter cross-deck landings in addition to search and rescue training,” according to 7th Fleet.

Littoral Combat Ship USS Jackson (LCS-6) and a P-8A Poseidon aircraft with Commander, Task Force (CTF) 72 will participate in the at-sea stage of the exercise in both international waters and territorial waters by Sattahip and Ko Samui, 7th Fleet said in the news release.

“Twenty eight years of CARAT Thailand represents the longstanding alliance between the people of Thailand and the United States,” Cmdr. Brian Bungay, the commanding officer of Jackson, said in the release. “We value these opportunities to work with the Royal Thai Navy, promoting regional security cooperation, and strengthening and enhancing our ability to work together while underway.”