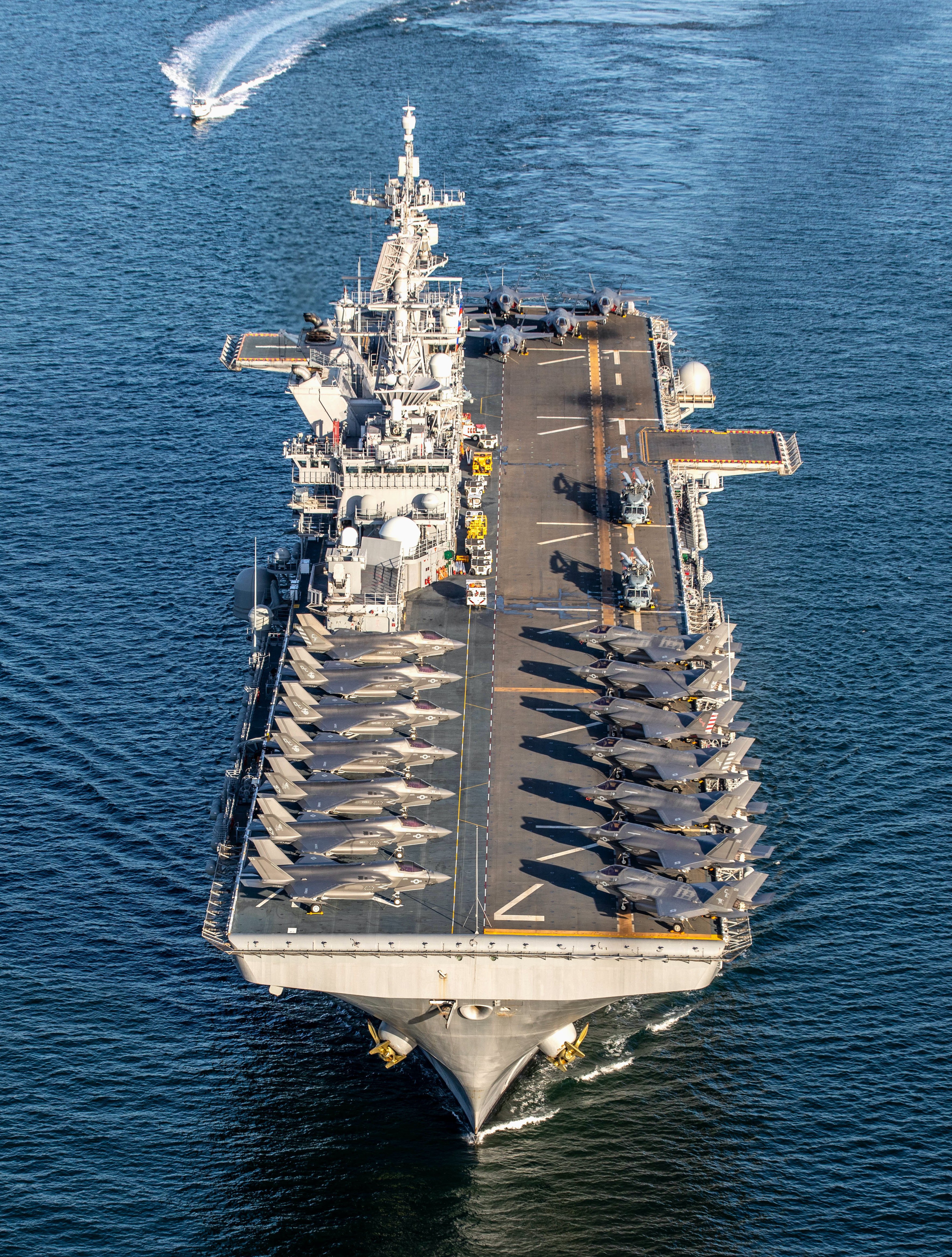 The 45,000-ton big-deck amphibious ship left San Diego to gather F-35B Lightning II Joint Strike Fighters that will include further testing of the Marine’s “lightning carrier” concept, a defense official confirmed to USNI News. The lightning carrier can load up to 20 of the short take-off, vertically landing F-35s as an adjunct capability to a carrier strike group, USNI News understands.

A U.S. 3rd Fleet spokesman confirmed to USNI News the big-deck left San Diego on Monday, but did not provide additional details on the deployment.

Tripoli’s departure comes just less than a month after the ship wrapped up a week of at-sea testing and training to prove the lightning carrier concept.

Operating off Southern California, Tripoli took on at one point 20 F-35Bs, marking a major milestone in seeing how many of the fighters the Navy and Marine Corps could operate aboard the ship at one time. The F-35s came from three Marine Corps squadrons, officials said. They included the “Vikings” of Marine Fighter Attack Squadron (VMFA) 225 and the “Wake Island Avengers” of VMFA-211, both based at Yuma Marine Corps Air Station, Ariz., and Marine Operational Test and Evaluation Squadron 1, based at Yuma and New River, N.C. The advanced, multi-mission F-35Bs are replacing the Marine Corps’ older F/A-18 Hornet and AV-8B Harrier jets.

Navy officials have said little about what it plans to do with Tripoli following the recent at-sea training. Other big-deck amphibious assaults ships usually train and deploy as part of a three-ship Amphibious Ready Group that deploys with 2,200-member Marine Expeditionary Units, with their large well-decks supporting waterborne craft that provide significant Marine Corps capability in littoral operations. Tripoli, however, was designed to support air operations, centered around the F-35B.

“We refer to the ship as ‘assault carrier 7.’ And assault is traditional for an LHD, LHA,” Capt. Joel Lang, the ship’s commander, said during an April 3 media event aboard Tripoli. “We have the space for a battalion landing team, we have about 1,000 infantrymen. And typically the air combat element is a blend of rotary and tilt-rotor in order to enable that assault force to go ashore. What we’re doing right now is lightning carrier, and we are proving the operational concept. … We are proving the tactics and the techniques and the procedures to employ the lightning carrier concept.” 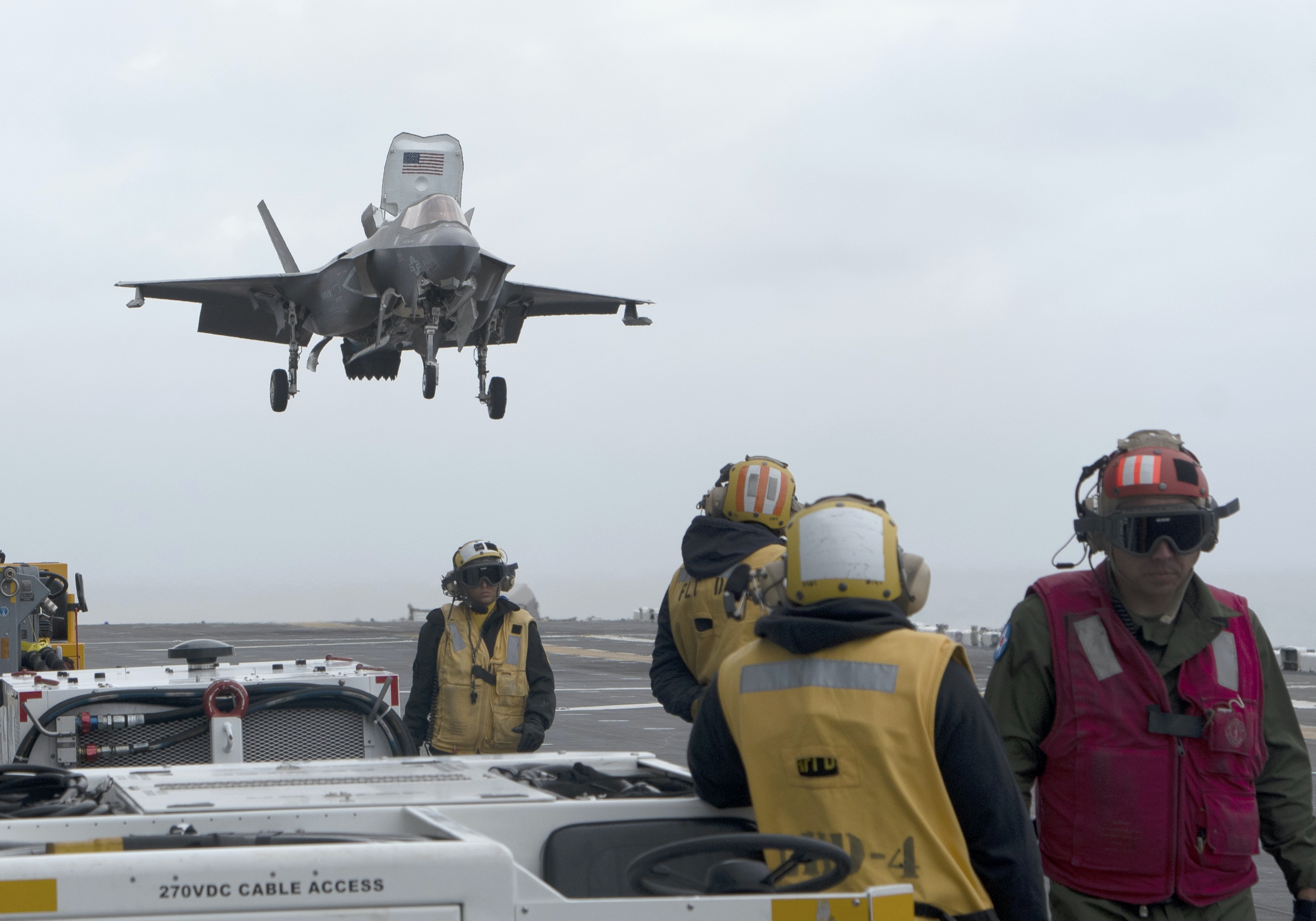 The arrival of Tripoli and a force of F-35Bs won’t in any way displace the MEU, but will give regional commanders new options, said Col. Chad Vaughn, commander of Marine Aircraft Group 13.

“This is just an option… for contingency operations,” said Vaughn, a veteran F/A-18 pilot who was among the first ones to transition to the F-35B. “This ship just gives you an option.”

“We’re not an aircraft carrier,” he said of Tripoli. “We are an LHA that is very uniquely suited to aviation operations – whether that’s an assault or in this case, a lightning carrier. The traditional carrier has capabilities that are unique that we do not. … We do some unique things that we can help out the joint task force or the combatant commander and do unique things to help out those CVNs and help out the Marine commander on the ground, whoever it is. We have some unique capabilities, especially when you put 20 F-35s on here.”

It’s unclear if Tripoli will transit the Pacific with additional amphibs, but it’s time in the Western Pacific comes as the Navy’s other aircraft-centric amphib – USS America (LHA-6) – is currently in a maintenance availability, USNI News understands.